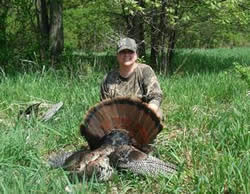 This year, during the 2007 spring turkey season, we tried to get tags for the first weekend of the hunting season. I guess the demand for the zone we applied for was too high and my husband, Mike, and I were not one of the lucky ones to receive tags. In a way it was a blessing in disguise as some of you may know that we had cold, windy and snowy weather that weekend, with some places getting 7-8 inches of snow. For a short time I thought that this year we were going to miss the spring hunt. Luckily the DNR now sells the tags that were not filled once the initial tags were drawn.

Barefoot, a fellow Lake Linker, knew how much I wanted to go turkey hunting and told me that he would be willing to take us out hunting and call for us if we were able to get tags in his area. Looking at the calendar trying to figure out the best weekend to go that there were still tags available we decided to give the 2nd last weekend of the spring season a try. That weekend just so happened to be Mothers Day weekend and the kids even had off of school that Friday. Mike was not able to take off of work for that Thursday or Friday, but I had some vacation time and decided to make it a long weekend with the kids. Mike was nice enough to drive “Wilson”, the mighty motor home, up to Indian Trails Campground Wednesday night for us and get us set up. I felt bad that he drove all the way there just to get us set up and then turn around to drive back home so he could be to work at 4 a.m.. I was also getting up at 4:00 a.m., but I was getting up to hunt not work.

"Just as he came from behind the bush he stuck his neck out and there was my shot."

Thursday morning Barefoot arrived at 4:00 a.m. and I was ready to go. We arrived at one of the public hunting areas and quietly walked to find an area that we could set up. Way off in the distance we heard a Tom, but needless to say 5 minutes of silence turned into 10 minutes which turned into 20 minutes and so on. We decided to get up and walk for a little bit to try another area with the hope of finding a Tom. No such luck. We started to head back to go pick up the decoys we left at the first place we set up and as we got close we spooked a jake that was right where we were set up. He took off in a hurry and we would never see him again. So time for us to move on and try somewhere else.

We tried a couple more areas to see if there were any Tom’s to be found. Now we have tried about 5 different areas and the sun is really starting to warm things up. They were talking temps in the 80’s, which when you are in full camo and no wind to help cool you off sure made it seem warmer than that. At this point I don’t know if I would even hear a Tom off in the distance as the mosquitoes and bugs, since we had atleast 3 applications of bug spray, would just swarm around our heads. Each time we moved I was hoping to hear that all-important gobble. I was starting to get tired and hot and just not could not get comfortable, and after hearing nothing but lots of birds and bugs for about 5 hours we started thinking that heading back by the kids and maybe going fishing was sounding good. After all, this was the first day of hunting and we still had 3 days to try and locate that Big Tom we are in search of. 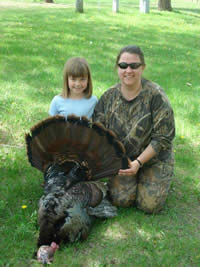 We started heading back and Barefoot decided to stop at this over look of a huge public hunting area. Scanning the area he goes back to get his binoculars and there he was……. Mr. Tom himself all fluffed up with two hens. It is about 10:00 a.m. and I am thinking the kids are probably just eating breakfast. Now we just have to figure out how to get closer without spooking them. WAIT!!!!!!! Where are my shells????? They are back at the last place we were hunting just laying on the ground where we were parked. Guess I had fishing and getting into some cooler clothes on the brain when I unloaded. Luckily it was only about 1 mile down the road. So back we go and get my shells, and I am so excited that we actually saw a Tom, just hoping that he is still there when we get back from getting my shells (another lesson learned!). So we get back and sure enough he is still there, a little closer to the tree line, but still there. Now we start heading down the hill and walked through some pretty marshy areas. We are both excited to get to a spot to set up and hope that we can call him in but have to stay out of site. We finally get to a spot that looks like a good place to try and call him in. I set up against a tree and Barefoot is somewhere behind me hiding and working his magic. I am sitting there listening as hard as I possibly can, just waiting to hear a gobble.

Nothing…. Now I am sitting in the sun and really starting to get warm and just hoping for a little bit of a breeze. No such luck. I hear some movement and realize it is Barefoot moving off to my left while still trying to call the Tom in which is off to my right. Now we start to hear the gobble, and another and another, but they sound so far away. I am in position with my gun pointed in the direction I hear him coming from so when and if he does get within my eye site I am ready. I know it was only a matter of a few minutes but it seemed like forever and with my heart racing and my arms starting to numb up, there was a loud gobble and there he was about 30 yards from me. I slowly just followed him with my shotgun aimed at his neck waiting for a good shot as he is still going toward Barefoots call. He now is behind a bush but I can see the top of his fan and continue to follow him as he is looking for that hen he thinks he hears. Just as he came from behind the bush he stuck his neck out and there was my shot. I squeezed the trigger, never even feeling the kick of the shotgun, and down he went. Wings were flapping and I hear “Did you get him?” I put my gun down and yell back “I got him”. I got up and started to try and run over to where he is laying, just flapping his wings and next thing I hear is “Where is your gun?” I go running to get my gun that I set down when I went to get up and realized that I just shot my first turkey. The rush made me start to have the shakes and I was like a little kid jumping up and down. I was in total amazement that I finally got my fist turkey after trying for a couple of years and he was a beautiful 20 pound Tom with a 10” beard and about 3/4 “ spurs. As soon as he stopped flapping his wings and I knew I had succeeded, I had to get my cell phone and try to call my husband. I really wish he could have been there and not at work, but I had to call him and tell him the good news.

This truly made this past Mother’s Day the best one ever. The only thing that could make it even better is if when Mike gets there that he to can shoot a turkey. After Mike and Barefoot went out Friday night to scout and hunted all day Saturday with no success, he got up Sunday morning and succeeded in shooting a 22 pound Tom with a 11” beard and the spurs were just over 2” and like hooks. Thank you Barefoot, for making this the best Mother’s Day for not only me but also for Mike. Now I am really hooked and I am already looking forward to the next turkey hunt.

Alice Williamson
Alice Williamson aka Farmerswife. I have lived in Wisconsin my whole life and I love the outdoors. I love turkey hunting, camping and fishing (ice fishing being my favorite). My family is the most important thing to me along with my friends. I am going on 12 years of being married to my husband Mike and he has not traded me in yet! My son, Jesse, and our daughter, Bailey, are making life interesting to say the least. And always remember you're unique, just like everyone else.
TRENDING DISCUSSIONS
Advertise here
Advertise here
Please take a moment to visit our sponsors. Without them we would not be here.