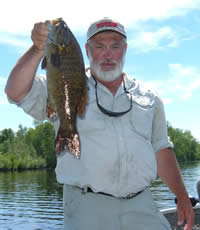 I have yet to meet an angler who does not like to catch smallmouth bass on topwater. Not only is experiencing an 18 inch smallmouth crushing a topwater bait exciting, but it is also addicting. After catching a few fish on top, many of my clients continue to fish the topwater bait, even if no other smallmouth shows any interest. The problem is that many anglers fail to put together all the pieces of the puzzle and likewise have only limited topwater success.

From June through early September, I can usually be found on the Menominee River, in pursuit of big smallmouth with my favorite topwater bait. Summer fishing on inland lakes and reservoirs can be unpredictable, although I do occasionally get into a good topwater bite. Early and late in the day smallmouth will move into the weeds and atop structure to feed. However, the river is the place to be in summer. My favorite river in particular is chucked full of smallmouth and 18 inch fish are common. Combine summer and a quality smallmouth fishery and you can't loose.

While the topwater bite on the river is always excellent, on some years it is better than others. This past summer was one of the best years for topwater fishing I have ever experienced. We were locked into a consistently hot summer weather pattern and by August the action was fantastic. Smallmouth were on the feed and they were very predictable. In fact, I had the topwater bite patterned as to the times it would start and end. Some of my clients were amazed at not only the topwater bite but how accurate my predictions were.

On occasion you get those memorable days when the topwater bite is awesome, and you can't seem to do anything wrong. One such day was last August when I got together with my friend Jim Saydak from Hammond, Indiana. I spoke with Jim the night before and told him the smallmouth fishing was great, so he was all pumped by the time we met at the boat landing the next morning.

"We probably caught 15 smallmouth in the 18 to 20 inch class. "
We met about 8:30 and I started fishing with a Yo-Zuri Hardcore crankbait and suggested Jim use a white four inch soft plastic jerkbait. I explained to Jim that he should due to the limited current, the fish would be holding a bit deeper and that he should rig the jerkbait wacky style. We caught an occasional smallmouth but nothing we could pattern. I told Jim that the fishing was only going to get better as the day progressed.

About 10:00 I moved to a small weedbed and tied on a Yo-Zuri ZZ-Pop and told Jim things were going to happen. The ZZ-Pop creates a loud gurgling, spitting, splashing, and popping noises with every twitch. On the second cast an 18 inch smallmouth smashed the bait and it was soon airborne and the battle began. After I released the smallmouth, Jim asked if I had another one of those baits. He tied on and after I gave him a short course on how to work it, he soon caught a nice smallmouth.

For the next few hours we caught what seemed like a smallmouth on every second or third cast. Smallmouth began breaking the surface and feeding on small gray minnows. The small gray minnows were feeding on small bugs. Smallmouth are on the top of the food chain and were taking advantage of the situation. The action was so good that Jim and I would wait for a smallmouth to rise, and cast the topwater lure right at the ripple. This was an easy target, and if we got within a few inches we usually connected with the smallmouth. I told Jim that this was an almost daily feeding pattern. 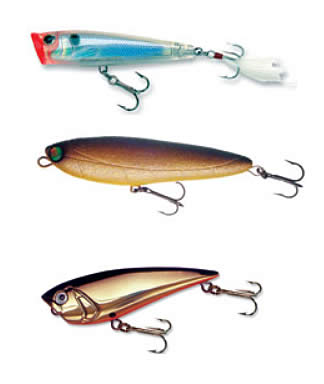 About 2:00 the topwater action came to an abrupt halt. We caught a few more big smallmouth with soft plastic jerkbaits but nothing on top. On the way back to the boat landing, Jim said he fished topwater baits for smallmouth before but he had never caught so many smallmouth, not to mention the average size. We probably caught 15 smallmouth in the 18 to 20 inch class. What an incredible day in anyone's book.

On the river I use a variety of topwater baits but do have my favorites. The ZZ-Pop as I mentioned earlier is an excellent choice, but the Yo-Zuri 3-D Popper is a close second. A pair of internal steel balls emit strike-provoking clicks and rattles at the slightest movement and also maximize casting distance. Top colors for both baits include Gold/black and Tennessee Shad. Both these color patterns have an orange belly. I have had great success with 20 inch plus smallmouth with the Yo-Zurri Live Bait ZZ Walker. This soft bodied bait has an action similar to a Zara Spook. However, the soft body and ultra sharp hooks result in a much higher hook up ratio than the spook.

I use both casting and spinning tackle and for the most part is a personal preference. When using a spinning rod choose a medium action rod like a the Lamiglas XMG 50 series EXS 663. For a casting rod I prefer an EXC 722 or an XC 734 Topwater Special. I spool my spinning reel with Yo-Zuri Hybrid Ultra Soft which is a fluorocarbon/nylon blend designed especially for spinning reels. On my casting reel I use Yo-Zuri Hardcore X-Tex Cobra in 12 pound test or 20 pound Cortland Master Braid.