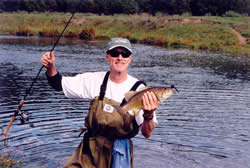 Fishing for smallmouth bass is my passion. I love chasing smallies on lakes, but enjoy the river experience even more. I've spent hundreds of hours wading smaller rivers from Southeast Wisconsin to the Southwest corner of the state. In recent years, I've done some productive exploring on the Wisconsin, Menominee, Oconto and St. Croix rivers by boat. In this article, I'm going to tell you what my four favorite lures are to catch river bronzebacks and how I use them.

Rebel Teeny Wee-Crawfish
Since I caught my very first river smallie on the Wisconsin River in August of 1995 on Rebel's Teeny Wee-Crawfish, this little fish catching magnet has been my constant companion on every one of my excursions for river smallies. This small 1 ¼", 1/10 oz., crawfish imitation; floater/diver crankbait has been very special. I can't tell you exactly how many smallies I've caught with this lure, but easily a number of thousand. 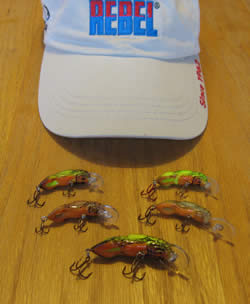 I fish it on a 6'6" or 7' St. Croix light action or medium light action rod with four or six-pound Silver Thread Excalibur line or Power Pro 15/4. I use a reel with a long cast spool because there are many times on clearer waters where long casts are important to not spook the fish. This lure comes with VMC #14 treble hooks, which are great for panfish, which is why I originally purchased it in 1992, but after a while, these small hooks begin to bend and break. A few years ago, I began changing the back #14 treble for a #10. I wish I would have done this earlier. With the #10 on the back I get more hook-ups, lose fewer fish, especially in current, and almost never bend or break a hook. The slightly larger hook doesn't hurt the very tight wiggle, and the bonus is the slightly heavier #10 turns it into a suspending crankbait, which can be nice in certain situations.

I may have fished this lure more than anyone in the country and feel that the small size and the vibration from the very tight wiggle are the two reasons this is such a successful river smallie lure. It also has a very realistic crawfish look. The rattles along with the tight wiggle add some noise to the great vibration. It comes in a variety of colors, but I don't feel the color is as important as the size and vibration. However, the colors I do use most often are Ditch (brown), Stream Crawfish (green), Chartreuse/Green Back, Fire Tiger and Chartreuse/Brown. The 2" Wee Crawfish is also a good lure, but in my experience has not been as productive as the smaller version.

Another bonus is that you don't have to be an expert to fish it. Just casting it and retrieving works great. This is how I fish it most of the time, casting cross-current or down-current. Retrieving with some resistance from the current will enhance the fish-attracting vibration. The deadly combination of the vibration, rattle, and in shallower rivers, bouncing off the bottom, rocks, or just swimming it back, works great. In faster-moving water, the steady retrieve seems to work best. In slower moving water, you can try a variety of retrieves and in colder water, slow it down. I think once you give it a try you fall for the Rebel Teeny Wee-Crawfish.

YUM Dinger
In recent years, Senko-style lures have become very popular. For both lake and river fishing, I've come to love the 3" and 4" YUM Dinger. They're very durable, reasonably priced and come in a ton of great colors. Also, the 3" version comes with 20 to a package and the 4" comes 15 to a package. In my opinion, having fished these for a number of years, they work as well or better than other Senko-type lures. 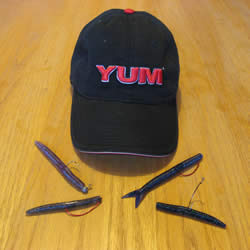 On rivers, these are extremely easy to use and are very productive. It's a do nothing or do very little presentation. On rivers I usually Texas-rig them with a 1/0 or 2/0 wide gap VMC or Excalibur worm hook. I fish it with 6 or 8-pound Excalibur line and 15/4 or 20/6 Power Pro. I should mention that I like the Excalibur because it is very abrasion resistant, which is important on rivers, strong and easy to work with. The Power Pro is a braid, super strong and very sensitive. With YUM Dingers I'm using medium light and medium St. Croix rods that are 6'6" and 7'. I use the stiffer rod for more backbone on the hook set.

I usually cast up-stream, keep the slack out of my line and let the weightless YUM Dinger tumble along the bottom. Try not to add too much motion. In slower moving water, I will sometimes add a little action by slowly raising the rod tip and then let the YUM Dinger again fall a foot or so. Wacky-rigging can also be very productive. With Wacky-rigging, the hook is inserted somewhere through the middle third of the lure. I fish this the same as the Texas-rigged presentation. In the accompanying picture you will see both the Texas-rigged and Wacky-rigged presentations. Some anglers like threading it on a light jig, shaking it while retrieving it along the bottom. This can be successful, but also will lead to many more snags.

As I mentioned, YUM Dingers come in many colors. Through some experimentation, you'll find what works best for you. I've had good luck with Ozark Smoke, Junebug, the various Watermelon versions and other natural colors. When I'm on the river, I usually take four or five colors. 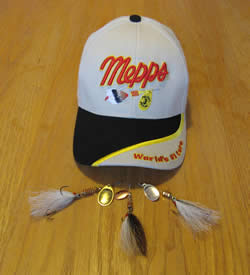 Mepps in-line spinners have been a popular river smallie lure for years, but a couple of years ago, I gave their new Aglia Streamer a try and have been very impressed. It combines the vibration and flash of a classic Mepps Aglia blade with the subtle and lifelike swimming action of a hand-tied streamer with the life-like look of some sort of minnow. They come in Mepps blade sizes #1, #2 and #3, with blade colors of gold, silver and copper. All feature a single long shank hook, but I especially like the version that comes with the treble stinger hook. For me, this has proved to be a nice touch to the lure and helps with short strikes. The Aglia Streamer also has an easy change body.

I've fished all three sizes in all the blade colors. All have produced, but on rivers with mostly smaller fish I prefer the #1 and #2 sizes. For rivers that hold bigger fish the #2 and #3 are what I use. I've preferred the brown streamer and white streamer, but I'm sure the black would also produce. I fish these with similar rods and line as the Teeny Wee-Crawfish. My presentation is also like that with the Teeny Wee-Crawfish. I cast cross-current or down stream and use a steady retrieve. Depending on water temperature and how active the fish are, I will vary the speed of the retrieve. Also, I don't want it to touch bottom, especially the version with the stinger, which increases the snag ratio. I think if you give this lure a shot, you'll be just as pleased as I've been. 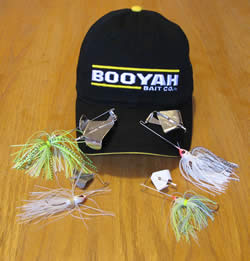 Until last fall, I had only fished buzzbaits a few times. But with the encouragement of a fellow river smallie enthusiast and after reading an August 2006 Bassmasters article on buzzbaits, I knew it was time. So in early last fall, on one of my wading rivers, I tied on the small Booyah 3/16 oz. Pond Magic Buzzbait in Shad (white). I was amazed at the number of strikes I received. As with many top-water presentations, there are strikes without hook-ups, and if I didn't hook a fish, I was sometimes getting two or three strikes on a single retrieve. After that day on the river, I was sold and continued to use the Pond Magic Buzz during the fall on some of the smaller rivers I wade. I also had great luck with the larger Booyah Buzzbaits that come in a ¼ oz., 3/8 oz. and 1/2oz. sizes.

I can't wait to get on some larger rivers and also in Door County to give those larger buzzbaits a shot where bigger smallies roam. I'm also going to be using the new Booyah Counter Strike Buzzbait, which features counter-rotating blades that deliver exceptional stability and a distinctive sound.

I mentioned the Bassmasters article from last August. The article featured buzzbait enthusiast Kevin Turner. I've never met Kevin, but had a chance to talk with him a number of times before heading to the Upper Mississippi early last June. He owns River Pro Jet Boats, which are high performance, inboard jet boats. Kevin's company is in Missouri, but he spends a great deal of time on the Upper Mississippi and is an extremely knowledgeable smallie angler. Kevin's primary smallie lure, once water temperatures reach the 50's, is a Booyah Buzzbait and he has great success. His tip is to throw it towards shore and retrieve it cross-current. He feels this retrieve surprises the smallies, who then react with a strike. I know he also has good luck on the Upper Mississippi with the Booyah Spinnerbaits. 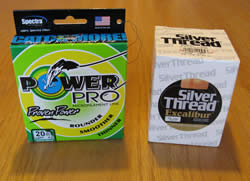 Fishing the smaller Pond Magic Buzzbaits St. Croix medium light rods are perfect, but with the bigger lures I like the mediums and also enjoy throwing them with a baitcaster. For my line, I use the 6 and 8-pound Excalibur and the 20/6 Power Pro. With a baitcaster I use 12-pound Excalibur and 30/8 or 40/10 Power Pro. I try to follow Kevin's direction and cast to shore and retrieve cross-current. I also had luck casting somewhat downstream and letting the speed of the current add to the speed of the blades, giving a great "buzz". I'm still experimenting with colors, but so far have had good luck with the whites, chartreuse/white and chartreuse. If you've used buzzbaits for smallies you've probably had the type of success I've had, and expect to have. If you haven't, I'd suggest giving it a try.

If you give these four lures a shot and follow my presentation suggestions, you'll be catching more river smallies. Remember though, to protect the resource, I believe strongly in practicing Catch and Release.