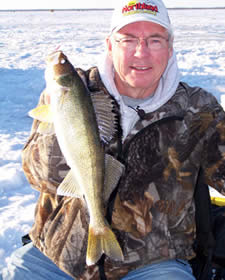 Sometimes anglers who fish in both open water and through the ice can learn from those seemingly opposite experiences. That point was made crystal-clear to me on my most recent ice-fishing trip a couple of weeks ago. Here’s what I mean.

First, you can’t catch the fish if they’re not there. When you’re ice-fishing, if you’re using a sonar unit, you can tell if the fish are there: You can see them on the sonar. Usually, if you don’t see something down there within a few minutes, it’s time to move.

Ice EyeSame’s true for open water fishing. If you’re not fishing where the fish are, you might as well keep moving until you find the fish. Humminbird has developed a tremendous line of sonar units that will reveal the fish if they’re down there. Keep in mind that sonar will show fish in deep water better than they will in shallow water because the transducer has a larger coverage area in deep water. The Humminbird color units separate fish from the bottom extremely well, so if the fish is in the transducer coverage area, it is going to be apparent to the angler that fish are nearby.

You’ve got to give them the bait the way they want it if you want to get bit. This was very obvious on our last ice-trip, and it holds true for open water fishing. We were fishing for crappies, and they were running right on the bottom. Forage Minnow spoons were what they wanted to eat. We would hold the spoon just a few inches off the bottom. When a crappie came in to take a look, we needed to slowly lift it toward the surface. They wouldn’t hit if we left it at the same level, shaking the spoon did no good either. We had to slowly lift it away from them. Some of the fish still ignored the bait, but most would hit.

"You’ve got to give them the bait the way they want it if you want to get bit."
Color matters, sometimes. When fishing through the ice, you can see how the fish react to a lure by watching your sonar. Frequently you can see them come in and look at a lure, then move away. Tie on the same lure in a different color and often a looker will become a taker.

That same thing will also happen in open water, more often than you might think. If the sonar shows that you’re over fish, but they won’t eat, try a different color, or a different size, or a lure with a different action. If what you’re doing isn’t working, do something else.

Ice-fishing, at least for me, is done for the season. However, the things we learn on the ice can help us catch more fish in open water.