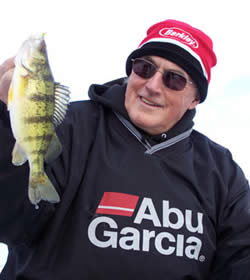 Sometimes when ice-fishing, the fish really want to bite. That's when an angler can get by with presentations that aren't real precise.

At other times, the fish want a bait a certain way. If it isn't presented just so, they're not going to hit. You can tell how finicky they are by watching your sonar. If they come in and eat the bait, they're aggressive.

If you can see them come in on the sonar screen, and they're moving slowly, but they still eat, they're kind of in between aggressive and finicky.

Finicky PerchWhen you see them come in and look at your bait, but not take it, they're being finicky. That doesn't mean they won't eat, it just means you have to present the lure in the way they want it. Here are some ideas for presenting baits to finicky fish.

First, you need a sonar unit that displays a good picture. MarCum makes several units that do a great job of identifying your lure and the fish. The MarCum LX-5 is favored by many anglers.

When you see a fish come in and look at your bait, but not eat, don't panic. Maybe that particular fish just wasn't ready to eat. However, if it happens several times, you need to do something different. If they're looking, you at least have their interest. However, we're not fishing for interest, we want them to bite.

First of all, slow the action of the lure down. Don't move it aggressively. There are times when too much action will convince the fish not to eat.

"That doesn't mean they won't eat, it just means you have to present the lure in the way they want it."

Try tying on the same type of lure in just a different color. Sometimes the fish want a particular color.

If that doesn't work, go to a smaller lure. When the fish are finicky, a small lure will often be better.

If panfish are the quarry, use a rod with light line. Sometimes bluegills and the like will respond best to a lure that is attached to two pound test line. The new FireLine Crystal is available in very small diameters and is nearly invisible underwater.

If they still won't bite, this trick has provided success when nothing else will. When you see fish looking, but they just won't eat, sit on your bucket or in your shelter, put the elbow of your rod hand on your knee, and put the bait right in the fish's face. By doing so, you are holding the bait as still as possible. If you don't rest your elbow on your knee, there is still a little tremor that can impart some action on the lure, and that tiny bit of action can turn the fish off. It sounds extreme, but I have seen the elbow/knee deal work too many times to know that it's not an exaggeration.

If you find you're on finicky fish, try these ideas. I bet they'll help you put more fish on the ice.