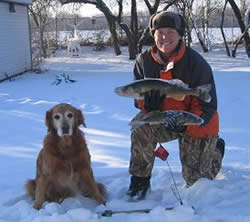 I was raised in the Upper Peninsula of Michigan, a place where the deer out number the people by 4 to 1. I have always enjoyed the outdoors and fishing has been a pastime of mine as long as I can remember. In my younger days, I spent many summer days floating around in a 12 foot aluminum boat waiting for the big one to appear from the deep blue.

In the winter we would trek out onto the frozen lake. The lake was surrounded by pine trees and the white snow went undisturbed. I was always so excited to be the one to mark the snow with our footprints as we walked to our favorite spot and put up the Tepee my father had made for these events. The older I got the busier I became and it seemed as fishing was bumped down further on the priority list.

After a stint of living in the south, I returned to the north and settled in Madison, Wisconsin. It wasn't the wilderness of my youth, but it does have several lakes, and enough cold weather to give us three months of ice fishing. Our summers are still to busy to get out to the lakes but I now have a reason to look forward to the long harsh winter that we know eventually returns.

I didn't get back into Ice fishing until I was in my 30's. I found it was a way to get outside, get some sunshine and fresh air. I feel like each time out is an adventure. I still get as excited about catching the big one as I did during my youth. Since my partner and I worked as a Police Officers, we often found we had time off when no one else did and we would enjoy our trek onto the Lake.

At first we had a hand auger and would take turns turning the handle trying to break thru the 6 plus inches of ice. It was the worst part of the trip. The hand augers are built for a male body with upper arm strength and it often took us several turns each. We each had a small jig rod and would sit on buckets looking into the hole. When I write these words on paper it even sound awful to me but believe me it was fun. The more we went the more we enjoyed it. We would often be with a group of men, as many anglers follow the moving schools of fish. What I always found interesting was that no matter how bundled up we would be as we trekked across the frozen lakes, the men we passed would always say "good luck ladies" With my large frame and only our eyes and nose showing I never understood how they knew we were women. Our exterior clothes looked exactly the same as all the men were wearing.

"No matter what activities you are into I hope you find your own Betsy Ross."
As we looked around at our fellow angles we were marveled by the high tech equipment. Beeping solar fish locaters, 4 wheel drive ATV'S, not to mention portable shacks and mini homes on the ice. It seemed we always had less fish than anyone else so I guess there was something to be said about being high tech.

Every year we would add more equipment to our collection. The first purchase was a power auger. One pull of the cord and the small motor does all the work while you hang on for the ride. It didn't take long to add a portable shack and the beeping solar locater. Finally we had to much equipment to pull out onto the ice so we had to add the 4 wheel drive atv.

Several years have passed and 9 knee surgeries later I was forced to retire from the police department. My mobility is now impaired and I have had to give up all the sports and the active life style that I once enjoyed. One thing I can still do is ice fish.

One day, I was out on the Ice talking to some of the other people fishing. I mentioned that I would like to have a permanent shack to leave on the lake instead of hauling my portable one every time I wanted to go. They pointed to a shack about 200 yards across the lake and told me that guy was selling his. I went to investigate and $300 dollars later I was the proud owner of a red white and blue shack complete with stars and stripes. I felt honored to be handed down this patriotic shack from the aging veteran.

I quickly named her the Betsy Ross and began to give the inside my own touches. Several years have gone by and the Betsy Ross is known around the lake. The inside has two benches that double as bunks. The heater keeps the inside a balmy 75 degrees. The picture window looks out over the lake where I can monitor my tip ups. I have added a camera that looks below the ice underneath the shack. Its like being in a aquarium.

Whenever I tell women that I am an avid Ice Fisher they all think I am crazy. The picture me sitting on a bucket in 20 below zero temperature, frozen stiff. What they don't realize is that it truly is a place of peace and tranquility. Often at home there are always chores to do, cleaning, cooking, errands, e-mail, phone calls etc. It's always been hard for me to sit in the house and do nothing, knowing that there are things that need doing. When I am in the Betsy Ross there is none of those distractions.

When I first to the arrive to the shack, (via ATV) I fire up the heater and go outside to drill 3 holes with the power auger. I set my 3 tip ups in the holes and return to the shack to wait for the flags to pop up to indicate a fish is on the line.

Once things are set up that's when the settling in occurs. With my jacket on the hook by the door and my dog curled up on the floor by the heater I wait. It's the only time in my life I am ever that patient. Now I'm free to read, daydream, enjoy the quiet, watch the monitor to see life underwater, or do absolutely nothing. When I notice the flag of the tip upright I say the words "tip up" and my dog jumps to her feet. I grab my jacket and head out the door to see if there in a fish on the line. I feel my heart beat with anticipation and find it excites me to think of a fish being on the line. Often times there is and last winter I even caught my first fish worth mounting. I always keep a few to eat but the majority of them get thrown back in the hole.

I often invite first timers out to the Betsy Ross to have a look at what ice fishing it really like. I meet them at the boat landing and they jump on the back of my ATV for the short ride out to the Shack. Once they realize they aren't going to freeze they relax. I can even see a change once they have been there for awhile. To have the peace, the quiet, the lack of pressure to complete any chores.......to only look out the window once in awhile to see if the flag is up.

"Whenever I tell women that I am an avid Ice Fisher they all think I am crazy."
After getting so relaxed and enjoying the tranquil moments, it is fun to watch the excitement as they notice the tip up. The first timers jump up and quickly don the warmer clothes to have a look. Its fun to see the look on there face when they pull a fish out of the hole.

A number of our friends, former coworkers, and even acquaintances have come out to experience the Betsy Ross. Everyone says the same thing that the shack has great karma and they would like to come back again. Many of them have started acquiring there own equipment and are hoping to find there own ice shack.

Word has spread around town and I have started organizing a annual Women's Ice Fisheree. I rent wooden shacks from a local bait shop. They come with heaters and are rigged with all the equipment. I want to give women an opportunity to experience the sport and lose the image of sitting on a bucket freezing. I know this sport is not for everyone but for those at all interested I encourage you to give it a try. No matter what activities you are into I hope you find your own Betsy Ross.

Barb Carey
Barb Carey is the founder of WI Women Fish and been organizing fishing outings for Women since 2003. She is currently a WI licensed fishing guide, an Ice Fishing instructor for Becoming an Outdoors Women, and has written ice fishing articles for magazines. Prior events produced include Women's Ice Fisheree's, the annual Women's Fish Camp and several spring walleye excursions. Barb is on the pro staff of Jiffy Ice Drills, Lighthouse Tip Up Light Company and is a rep for Eskimo Ice Shacks. Barb holds several community volunteer positions and lives in Madison WI. WI Women Fish web site can be located at www.wiwomenfish.com.
BITS & BITES
Advertise here
Advertise here
Please take a moment to visit our sponsors. Without them we would not be here.