By Bob Jensen - January 1, 2007
Every now and then the fish get a little finicky, sometimes a lot finicky. Regardless of whether it’s open water or ice season, there are ways to encourage these finicky biters to take your bait. Following are some ways to get them to eat your lure when you’re ice-fishing.

First of all, how do you tell if the fish are finicky? It is important to first determine that fish are actually in the area. You can do this one of two ways.

If the water is shallow enough and clear, you can actually see the fish down there looking at your lure.

In deeper water or where you can’t see the fish, a sonar will reveal their presence. You can "see" the fish come into the area where your lure is. 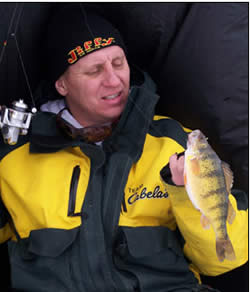 If they come in and eat your bait, no problem, they’re not finicky. But if you see them come in and look, but not eat, something needs to be altered.

Start off by going to a different color of lure, or a different lure style. Maybe try a waxworm instead of a minnow.

If that doesn’t work, try down-sizing. Often a fish that ignores larger lures will readily inhale a smaller offering.

Line that is less visible is a possible cure for finicky biters. The new FireLine Crystal is available in tiny tests and is nearly invisible below the water.

Consider changing the action you’re putting on the lure. Sometimes a slower, almost motionless lure action will convince the fish to bite. This became very apparent to me on a trip to northeast South Dakota a couple of years ago.

This region of South Dakota has some fabulous perch fishing, but the perch get pressured quite a bit. By late in the year they can get pretty selective in what they’re willing to eat.

I was using a MarCum LX-5 sonar. On this unit you can see the tiniest jig in deep water. You can also see the perch come in and look at your lure. On this day, there were a lot of lookers, but not many biters. After trying all sorts of different baits and lure actions with no success, I decided to just sit down and try to make the perch bite. Sitting down is what it took.

I had been walking to various holes, pulling my portable shelter. I was using pulling the shelter from hole to hole not to sit in it, but because it had all my gear in it. I was giving each hole just a couple of minutes. I would see fish below almost every hole, but none of them wanted to bite.

At the next hole that I pulled up to that had fish, I sat down and lowered a Northland Micro Minnow tipped with a Gulp! Maggot to the level of the perch. I let it sit there motionless while the perch looked at it. The longer the perch looked, the more I wanted to jiggle the bait. If I jiggled, the perch left. When I got the discipline to let the bait sit perfectly still, the perch ate it. Sometimes it took thirty seconds to get them to eat, but eventually they would take the bait. The horizontal lure tipped with a bait that emitted scent but didn’t wiggle was the key.

Remember that even finicky fish can sometimes be convinced to eat your bait. Try the things we just talked about and you’ll be more successful with finicky fish more often.