Has Anyone Seen Walter?

By Steve Huber - July 1, 2000
Walter, Wally, Marbleyes, those %$*@ miserable ~%^*$, all these are common names for walleyes, that wonderful tasting, mysterious gamefish that seems to disappear just about now, only to return in the fall. If you're like I used to be, these glassy eyed buggers were a piece of cake to catch early in the season, then you'd swear that they grew wings and migrated somewhere else, usually around vacation time. Where'd they 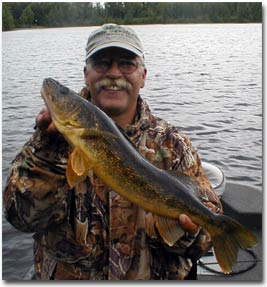 go? All the spots that produced earlier in the year are devoid of fish, the points are empty, the gravel shorelines a wasteland, and casting crankbaits with the hooks removed at the cat is more exciting than those mid-lake humps. You've emptied your wallet buying livebait, crawlers are picked apart by panfish, minnows are ignored and leeches just turn to a nasty smelling goo in the cooler. Where'd they GO??? Much has been written about trolling for mudflat walleyes and night fishing these elusive critters but what if these aren't options for you?

My advice is to look for them "where they ain't." After reading that, you're probably thinking "Well, isn't that special." But give me a chance to explain. First of all, you know that the late spring/early summer places aren't giving up fish. You also know that the walleyes haven't grown wings and are probably still somewhere down there.....but where? They've gone where the baitfish are and that is probably where you aren't used to looking for them. Everyone knows that walleyes relate to timber but how many of you really fish timber? My guess is not many, it's a pain in the butt and can result in mucho lost tackle if not done right.

First of all, to fish timber properly, put away the ultralight "noodle" rod and get a good, fast- action 6 « foot spinning rod. Spool it up with 10 lb. FireLine 'cuz you're going to need a line that is sensitive with ZERO stretch.

Now, go get some 1/16th and 1/8th oz. Weedless Jigs, no heavier because if you do, your tackle dealer will love you but your wallet won't. Rig up a weedless jig with either a PowerBait twister tail-type grub or a leech. Position the boat a short cast away from downed timber in the water and flip some casts right into the tops of these nightmares. Let the jig fall on an open bail until the jig hits bottom. Then, slowly, carefully jig the lure, lifting with the rod tip, feeling the jig back up through the branches. If it gets hung up, DON'T pull hard, "jiggle" the jig while giving it a little slack line, then by applying some lift to the rod tip, you can usually get the jig free and moving again. You'd be surprised at how many times a walleye will help you free the jig from the snag, grabbing it as you're trying to free it! When you do get bit, set the hook HARD and keep the pressure on. Doing this will turn the fish's head toward you and by keeping the pressure on, you'll be able to snake some surprisingly large walleyes from some fairly heavy cover. Not all trees will produce walleyes. Look for those that have fallen from fast dropping shorelines into some fairly (4 ft. +) deep water. If you can find something like this, you'll probably find walleyes.

Another place that "they ain't" is in the weeds. My largest walleye came from a thick clump of weeds, 6 « feet of water, at 1:30 in the afternoon on a clear, sunny July day. Using the same tackle as I suggested for working the timber is also perfect for weedbed walleyes. Cabbage weed is an underfished walleye magnet. Using these lightweight jigs, cast over the top of the weeds and swim the jig/bait combo just over the tops of the cabbage. If the lure catches on a weed, use that shaking technique to free it, you just might have the same result as jiggling did in the trees. When the lure gets to a pocket in the weeds, let it tumble in. Often walleyes are lying in wait in these holes and will jump on a jig free-falling past it. Lift the rod tip and pull the jig out of the hole (if it doesn't get hit) and continue to swim the bait back to you. Once at the edge of the weedbed, let the jig tumble down to the bottom and fish it back to the boat. An advantage to using FireLine for this type of 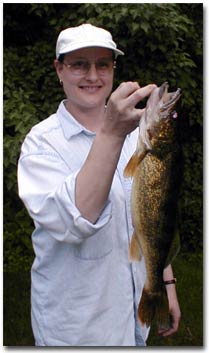 fishing is that with FireLine's strength and fine diameter, it will cut through weeds and the fish will "wrap up" less.

My last suggestion is to look for them shallow. Last year, my partner Gil caught some dandy walleyes during the middle of the day, in the middle of summer, flipping a bass jig/pig combination into shallow lily pads. I don't know who was more surprised.....Gil or the walleyes. Since then, we've done it on purpose and amazingly, it works! Just recently though, the walleyes wrote a new chapter on "Things they like that we didn't know about." Everyone "knows" that spinnerbaits are great for bass, northern pike and even muskies. How many of you knew that walleyes like them too? We were out, pre-fishing for a bass/pike guide job, throwing spinnerbaits to shallow weed beds and timber, perfectly "Bassy" looking spots. Gil had an 18 in. walleye hit a spinnerbait on a boatside figure 8. Later that day, I was surprised by throwing a spinnerbait into a foot of water, on the backside of a lily pad bed and jerking a 19 in. walleye from this skinny water. Three more walleyes (up to 24 in.) have been caught doing this so I don't think that it's a fluke. As soon as I get some free time, I'm going out, armed with 1/4 oz. spinnerbaits, some leeches and I'm going to see exactly what's hanging out in the weeds. I'll bet that I won't be surprised.

Good luck, have fun and practice selective catch and release.