By Robert Piorkowski - July 1, 2000
It was just like you see on the fishing shows. I tossed out my fly, mended for the drift, and slowly worked the bottom. After several bumps I felt the familiar steady pull. Fish-On!

My goal this summer was to get out and flyfish at least once a week. I spent the winter watching tapes, reading books and magazines and attending seminars. I was ready to catch anything that swam. My homework paid off on several occasions. With the high water, I changed my fishing location from the major rivers to the feeder creeks. These tributaries would have high water after a rain event, but will empty quickly. Some tributaries will actually become flooded due to the main river. These are the tributaries to identify, they have low flow, but are flooded from the main channel.

This year, the rains had been consistently erratic. Just as the rivers were returning to a good level, the rains 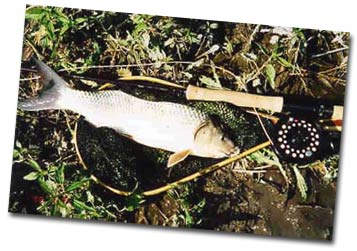 would return. It always seemed to rain the day before I planned to go fishing. If I picked a Friday night, It was sure to rain on Thursday. Finally, after several weeks, we had a dry period and I found time to fish.

On Friday after work, I headed to the Fox River to flyfish below Batavia. The water was flowing fast and muddy, but I waded across the shallows to an island. I had fished the area in low water conditions, so I knew a stretch of shallow ground for wading. I made my way to the downstream end of the island so I could fish the current break. There was a very visible current seam separating the fast current and stagnant back flow. I casted out a clouser minnow pattern 3 feet into the fast current, and slowly stripped it back into the slack water. I fan casted upstream and downstream into the current, while maintaining my position at the end of the island. Just inside the calm portion of the seam, something inhaled my fly. There was no jumping, only heavy pulling out into the current. I managed to get the fish onto the reel, and after a several minute fight, I netted several pound carp. The black and white clouser minnow was firmly set in the side of his mouth. I took several photos and released the fish. Right fly, technique and location but wrong fish. It wasn't the elusive smallmouth, but a great fight for the first fish of the year on the new flyrod. I continued fishing the current seam, but had no more action that evening.

The next Friday after work, I headed to fish the Kankakee River at the DesPlaines Conservation Area. Like the Fox River, the flow was fast and muddy. I decided instead to fish the feeder creek above I-55 in hopes that it had a lower flow. At the mouth, I fished the mud line where there was a slight current break. It seemed the muddy Kankakee water would flow into the creek, then the cleaner creek water would push it back. I saw a shore angler catch a bass, so I new fish were in the area. I used the same approach as with the Fox River. I casted out a clouser minnow pattern into the fast current and slowly stripped it back into the slack water. I fan casted upstream and downstream into the current and slack water searching for fish. With no luck at this spot,

I headed up the creek to fish the rock ledges where the creek forms a pool. This was a textbook location for holding smallmouth bass. I waded into the creek only far enough so I had room to cast sidearm. The pool was only 3-4 feet deep, so I didn't want to spook any fish. I made several casts into the current, and worked my fly into the slack water. I also tried to cast past the moving water and work the fly into the fast current. On the third cast, I mended for the drift, and slowly worked the bottom. After several feet I felt the familiar steady pull. Fish-On! It was just like I had read over the winter. I followed tips and techniques from my winter studying, and it paid off. This fish wanted nothing to do with my net. He pulled straight down stream stripping line. At a moment of rest, the fish floated up and relaxed, and I was able to reel in some slack line. The next moment he was heading back downstream. After several series of rests and runs, I tried to estimate the next rest period. I was trying to time the rest period so I could maneuver my net for landing. The fish took another rest and I pulled him to the net. Three feet from the net, the fish jumped and threw my fly in the air. I stood motionless in the river frozen in position. I had my rod pointing upstream, and my empty net in the water pointing downstream. I couldn't believe I had goofed. I had a list of things that had gone wrong. (I should've let the fish tire out, or loosen the drag, or walked to shore, or called for help.) I did everything correct except the last step. The weather was beautiful, water was warm, and I got to flyfish for several hours. I lost a big smallmouth, but I was thankful that we got the chance to fight. In review, the carp took the black/white clouser minnow on a muddy bottom, as the fly went into calm water. The smallmouth took the same black/white fly on a rocky bottom as the fly went into faster current. Next time out flyfishing, I plan to try both techniques and continue testing different bottom structures. So, when the water is high, keep fishing. The fish are there, you just need to place the fly closer to them.