By Bob Jensen - December 1, 2006
Part of the fun of any new fishing season is the anticipation of exploring new waters, chasing a new species of fish, and using new fishing equipment. The ice-fishing world always has new items that can help you catch more fish or be more efficient in your time on the ice. Following are some ideas or products that will make your ice-fishing more productive. 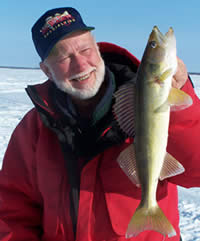 If you're going to catch anything while ice-fishing, you've got to put a hole in the ice. Some anglers put lots of holes in the ice so they can quickly find the area that is holding fish. Unfortunately, the blades on some augers wear out quickly, which makes it hard to cut through ice.

And, in some areas of the Midwest, "snirt" is a factor. "Snirt" is a combination of snow and dirt. In windy areas, dirt and snow blow onto the ice. The blades on augers don't keep their edge when cutting through "snirt". At least they didn't until Jiffy introduced their Stealth STX units. The specially treated blades on Stealth STX augers are guaranteed to stay sharp for three years. That's a real improvement for ice augers!

Some anglers are convinced that red hooks catch more fish. I don't know why, but in lots of experiments, it has become apparent that red is a real fish attractor. That's why one of the best jigging spoons anywhere, anytime, the Buck-Shot Rattle Spoon, now comes with red hooks. Will the fish eventually start showing a preference for another hook color sometime in the future? I don't know, but I do know that the next time jigging spoons are called for, I'm going to be using a spoon with red hooks.

Something brand new for this ice-fishing season is the Frabill Glide-Trax shelters. These portable shelters have much less surface on the ice, so they pull much easier. They have built-in storage, oversized doors, and a list of other features that make them a great choice for an ice-fishing shelter.

Ice-fishing is no fun if you're not warm, and selecting the proper clothing is the only way you're going to stay warm. Cotton clothing isn't the answer. There are lots of clothing options available to the ice-angler: In fact, there are now suits being designed specifically with the ice-angler in mind.

The favorite of many ice-anglers is Cabela's GuideWear. This stuff was designed as a rain suit for open water, but the insulated GuideWear has caught on as a friend to the ice-angler. It's warm, and since it repels water, it works great for kneeling in the snow next to your fishing hole.

If you prefer fleece and lots of warmth, check out Cabela's Super Slam clothing. It's the ultimate in comfort and quiet, and performs well in snow. It's really nice stuff.

Ice-fishing season is just getting started. When you get the chance, check out the new products for ice-fishing, and then be sure to give them plenty of opportunities to produce.