Try Something New for More Fish 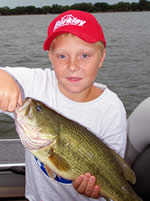 Sometimes anglers get in a rut. So much of the time we tie on the lure that was productive on our last fishing trip and stick with it too long. Although that lure might be producing o.k., there could be another lure that would be much more productive. That point smacked me over the head on a recent fishing trip.

My nephew Sam and I traveled to central Minnesota in early August to join our bass-catching friend Mike Frisch. We had an afternoon and the next morning to chase bass. The bass were "on a pretty good jig-worm bite," Mike told us when we arrived. That made sense, largemouth are almost always willing to eat a jig-worm, especially this time of year.

Sam has caught a lot of fish and some pretty big ones in his ten years of life. This was his first trip to Minnesota, and the first time he had used jig-worms. He was unencumbered with traditional ways to catch fish. Hes also a little impatient. If something isnt working, he wants to find something that will work. Thats a good thing.

We started on a weedline that dropped into deep water. The bass were biting the baits pretty good for Mike and I, but Sam wasnt getting bit so good. We were using four inch Power Worms on our jigs. Color didnt matter.

After watching Mike and I catch several bass, Sam decided a change was in order. He started digging in my box of plastics and found some Power Bait SaberTail worms. Sabertails are a brand new Power Bait shape. They have flippers and arms on each end and dont look like anything that lives in the water. Sam wanted to try them. The experts in the boat suggested that he stick with the traditional plastic worm a little longer, so he did. He didnt get bit. Finally he slipped a SaberTail onto his jig. On his second cast he hooked and landed a largemouth bass over four pounds.

After that, Sam had lots of action, and the bass were absolutely inhaling the SaberTail, while they were mostly lip-hooked with the traditional jig-worms. The bass hadnt seen anything like the SaberTail before, and they were engulfing it. They were taking the regular worms a little more cautiously because they were conditioned to them.

The next day we were chasing smallmouth, using traditional smallmouth plastics like grubs and tubes. We worked a spot that usually produced fish, but nothing happened. Sam asked if he could try the SaberTail again.

"Sometimes anglers get in a rut."
One of the experts in the boat said that the SaberTail wasnt really a smallmouth shape, but go ahead and give it a try. This time, no kidding, a smallmouth bit the SaberTail on the first cast. Sam unhooked the bass and slid it back into the water without commenting. Three casts later, with another smallmouth struggling on the end of his line, Sam suggested that "Maybe the smallmouth dont know this isnt a smallmouth shape." Wise guy.