By Steve Huber - June 1, 2001
Can you picture this? An early morning sun peeking through the trees, the sound of water gently burbling over rocks, the rhythmic flow of a fly rod as it weaves patterns in the air.......if you can, you won't be fishing with me!

Come with me for the day, fire up the 175 horsepower Mercury outboard, blast off, cruise down the lake for a little 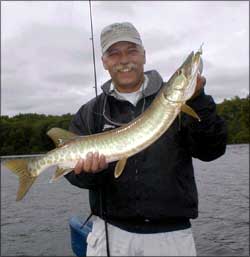 while. Drop the trolling motor, grab a rod and start casting, talking, laughing, pick the occasional backlash and cast some more. Look down into the water behind your lure as you crank it back, "OH MY GOD, There it is"...... A hulking shadow cruises behind your lure, maybe disappearing in a flash, making you wonder if it was even there, maybe it follows your lure right up to the side of the boat, slowly sinking like a flesh and blood submarine, or maybe, just MAYBE that beast powers its way in, pushing a 3 inch tall wake on the surface, slashing at the lure as you make the first turn of the figure 8 that I've been making you do all morning. All Hell breaks loose at boatside, water going everywhere, your rod bucking and straining in your hands, a thrashing, twisting, rolling powerhouse firmly attached to your line, then......it's GONE!!! Weak in the knees and trembling, you look to me for sympathy and words of advice, only to find I'm chuckling at the expression on your face, knowing that you're now hooked far worse than that muskie ever was. Welcome to muskie fishing, my friend.

Ah yes, muskies. The fish of 10,000 casts, the official Wisconsin State Fish, the fish that dreams are made of. Yeah, you want one, you want to feel what it feels like to catch one, you want to be among the few, the proud, the Marines... Wait a minute, sorry, I got carried away.

You just wanna catch a muskie but you're not sure how to go about it. At the local baitshop, you look at the muskie lure section, but it's fairly intimidating when you start looking at all the different lures. Jeez, look at the SIZE of these things, look at the prices, where do you start, what do you get?

If you look in my boat, you'll see a huge tackle box filled with lures of all different shapes and sizes. At the average price of $15 each, some quick mental calculating (or not) reveals that there's roughly the price of a small car tied up in lures.

But what do you need, where do you go, how do you start fishing for these freshwater sharks? First of all, if you have a medium to medium heavy bass rod and a decent baitcasting reel, you're partway there. Spool up the reel with 50 lb. PowerPro line, another part of the muskie on a budget equation. The reason I like PowerPro is that it has a fantastic strength to diameter ratio, zero stretch, it stands up to a muskie's teeth without a leader very well and will absolutely, positively, get any bass out of just about anywhere.

One of the big problems most people have with catching muskies is getting hooks into the fish. PowerPro eliminates that variable, allowing great hooksets into that toothy, bony mouth. Get the hooks in and with a little patience and caution, that elusive muskie will be yours.

Now, "Oh man, I gotta buy a bunch of those big, hernia inducing lures, right?" Nope, again, using bass tackle, you size the lures to the tackle that you're using. « to 1 oz. spinnerbaits will get you bit, and bit often. Other lures that will do the job and not trash your back in the process are the Bucher Baby ShallowRaider, Pete Maina's 6" Jake bait and the 6" Crane bait.

The Crane is especially nice to use with bass tackle because it's made of balsa wood and is quite light. Other lures that are effective on muskies and are still small enough for bass tackle are the Mepp's MuskyKiller, the Baby MuskieBuster and the SecretWeapon spinnerbait line. Mesa Tackle Company is making a superb line of muskie sized soft plastics in the shape of Reaper Tails and 9" WaterDogs that make excellent soft jerk baits.

OK, you have the rod/reel, line and lures, you're 1/3 of the way there. That's right, 1/3 and 1/3 only. You still have to find the fish and still trigger the strike, that's where you and your powers of observation come in.

straightforward. Find the forage fish, you've found the muskies. One thing that I like about muskies is that sophisticated electronics aren't totally needed. Much of the muskie fishing that I do is visual. I like that, even though I have a lot of electronics on my boat, I'm still "Object Oriented". I like casting to visual cover, making pinpoint, accurate casts. It's this visual oriented fishing that makes it possible for the casual, weekend angler to successfully hunt muskies.

The first thing I look for when fishing muskies is panfish anglers. Remember, find the forage, find the muskies. When I find some people perch fishing, I remember that spot and fish it later, when the "coast" is clear. Sometimes, I've had "perchjerkers" tell me about the big muskie that has been clobbering "their" perch. It's a real time saver when you have other anglers tell you where the muskies are.

Muskies can be object oriented, again, making location fairly simple. Downed trees in the water? Fish them. This is where spinnerbaits and soft plastics really shine. With their snag resistant design, you can throw a lure right into the thick stuff, where many fear to go for fear of losing a $20 lure. A stump field with deep water nearby? Fish it. Again, use soft plastics and spinnerbaits. But, if you're careful, you'd be amazed at how well a crankbait can be twitched, cranked and steered in and around stumps. Muskies love to lie in ambush in these areas. How about rock points and weedbeds?

Rock points can be muskie magnets. Quick access to deep water, cover and forage are present in these locations. You can use all of your new muskie lures in these places. Fish these points deep, fish them shallow and all areas in between. All different lures work here. Soft plastics on large jigheads can be fished deep, probing the depths. Slightly shallower up the point, slow rolled spinnerbaits. You can cast them out, allow them to sink and then slowly retrieve the lure, letting it tick the rocks on the retrieve. Closer to shore, the Jake Bait and ShallowRaiders come into play. Cast out, pump the lure back, experimenting with retrieves until something triggers a strike. Shallow, this is where spinnerbaits come into play.

These lures are awesome when worked over the tops of the shallow weeds. Muskies lie in pockets, waiting for baitfish to pass overhead. It's simple work to rise, slurp down some perch calories and back down to do it over again. The easiest way to work spinnerbaits in weeds is to begin the retrieve immediately upon the lure hitting the 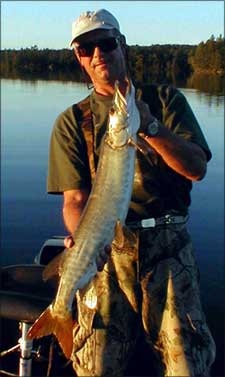 water. The running depth of lure can be adjusted by raising or lowering the rod tip and/or changing the speed of the lure. I like to keep the lure just over the weeds, ticking the tips occasionally. If the lure does get hung up, a quick rip of the rod will free the lure, snapping the weeds off the lure. This "Quick Rip" will quite often trigger a violent strike. If I find muskies to be following lures but not striking the lure, I'll try occasionally ripping the lure. Many times I've just about had the rod ripped from my hands while doing this maneuver.

One last thing to remember is to ALWAYS "Figure Eight" your lure at the end of each and every cast. You'll be amazed at how many times a muskie will "just appear" at boatside. That's why I'm telling you to figure 8 on each and every cast. With baitcasting tackle, this is an easy maneuver. As the lure approaches the boat, lower the rod tip into the water. When the lure is roughly 12 - 16" from the rod tip, stop reeling while continuing to move the lure with the rod. As you're moving the lure, reach down and push the reel's free-spool button and clamp your thumb down hard on the reel spool. Try to draw as large of a figure 8 in the water as you can, making the corners as wide as possible. The reason for making large corners is that even a small muskie is still quite long and cannot turn tight corners. If the fish loses sight of the lure, it will probably lose interest and swim away.

So ok, you're doing the figure 8, with the rod tip in the water (trust me, the rod won't bother the fish if it really wants that lure) and there's a muskie behind the lure. It will probably hit the lure on the turn, if this happens, set the hook TOWARD THE TAIL OF THE FISH. Any other direction will result in a fish story and not much else. Now, the reason that you have the reel in free-spool is you really don't want a yard of really irate fish hooked up with only a foot of line out, do you? Once the hook is set, release a little tension on the spool and let the fish run away from the boat. Once it's 20 feet or so from the boat, clamp down on the spool again with your thumb and stop that muskie. Re-engage the reel and "Have at er"! Believe me, this does work, last season, over 12 muskies were boated doing this exact thing.

So, you see, even though there is a lot to muskie fishing, it doesn't have to be terribly complicated, well, unless you want it to be. Me, I'm fairly simple and prefer to keep my fishing methods the same. Catch a muskie or two, then complicate things. Trust me, it's better that way.