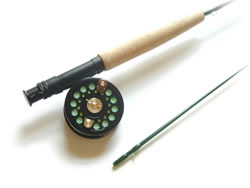 Fly fishing has often been thought of a mysterious form of fishing that you could only catch trout with. Nothing could be further from the truth. Like fishing with conventional tackle, fly fishing can be as simple or complicated as you want it to be and species from bluegills to billfish can be caught with fly tackle.

While some anglers commit to only using a fly rod keep in mind it is just another tool in the fisherman's arsenal. At times it can be the most effective way to catch fish and at others the least effective. If you enjoy trout fishing fly fishing is typically the best way to catch fish. Trout generally have a diet made up of mostly insects. The finesse that a fly rod allows you when using flies is often the perfect presentation. If you want to catch bass, pike or muskies with a fly rod though, things are different.

Large baits that move water and make noise is more in order for bass and toothy fish and even the most die hard fly fisherman has to admit that even the largest of flies can't make that same noise or disturbance in the water. At the times when fish are neutral to negative flies can really become effective. A fly can be suspended in the water or retrieved very slowly offering a presentation for the tougher periods.

Post-spawn muskies for instance will usually be turned off with large baits. The finesse end of fly fishing can be very productive at these times.

During the magic quiet evening time on a lake there's nothing better than fishing top water flies for bass. Large poppers and hair bugs can make some noise and bring the fish up to them making for an enjoyable experience.

Covering water can also be more effective with a fly rod than conventional gear. It's true that it is easier to cast farther and cover more distance with a casting or spinning rod but imagine fishing a river for smallmouth or muskies. The general target zone is usually close to shore. The anglers fishing conventional gear makes their cast close to shore and retrieve back to the boat to make their next cast. With this setup you have to retrieve all the way back to the boat before casting again even though your target zone may only be a few feet of water next to the bank. With a fly rod you can make your 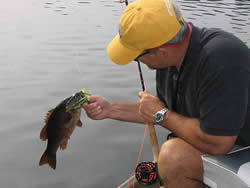 cast, retrieve your fly through the couple of feet of target water and pick up the fly without retrieving back to the boat due to the weight of the fly line. You can then make a quick cast to the next spot. I can cover five to six times the water floating a river with a fly rod than someone using general tackle. Fly gear has changed plenty in the last ten or so years. Rods have improved and made casting easier. Reels can be purchased with sophisticated drags that are capable of landing fish over one hundred pounds and fly lines now come in species specific tapers that both float and sink covering all of the water column you may be fishing.

One of the other reasons folks choose to fly fish is the challenge of it. I was setting up a sinking line rig for a customer the other day. He was going to Florida to fish large jack crevalle on wrecks forty feet deep. While setting up the sinking line to get down that deep, another customer asked why he would go to the trouble of fishing that deep for fish that large with a fly rod. The customer replied, "For the challenge of it".

Like a deer hunter using a long bow instead of a wheel bow the fly rod can simplify things for a lot of people. A rod, line, reel some leaders and some flies is pretty much all you need to go out and have some fun. Don't worry about Latin bug names. Learn to cast and go catch some fish.

Pat Ehlers
Capt. Pat Ehlers owns The Fly Fishers Fly Shop in Milwaukee, WI. He has been fly-fishing for over 30 years. He has taught fly-fishing classes and schools and has given seminars throughout the country. His fishing has taken him across the U.S. as well as Canada, Mexico, the Bahamas, Central America and the South Pacific. He works as a consultant to fly-fishing companies and has designed a series of fly lines for the Jim Teeny Fly Line Co. www.theflyfishers.com
BITS & BITES
Advertise here
Advertise here
Please take a moment to visit our sponsors. Without them we would not be here.