By Steve Ryan - April 1, 2006
With the snow and ice lingering this winter, I told my wife it was time to get some salt and sand. Not for the driveway, but for our drinks and for under our toes - it was time to head down to Cabo. The weather forecast was for 80 degree temperatures and sunny skies . . . all month. Plus, the striped marlin report was red hot. 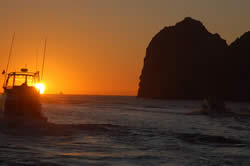 From Earnest Hemingway to Sammy Hagar, folks can't get enough of Cabo San Lucas, Mexico - a (former) sleepy little town that lies south of the border at the tip of the Baja peninsula. Long before Van Halen extolled the virtues of Cabo's beautiful sand beaches, pretty girls and lively nightlife, Cabo had established itself as one of the world's premier fishing destinations. Situated at land's end, where the Sea of Cortez meets the Pacific Ocean, Cabo San Lucas boasts favorable water temperatures and currents which make for nonstop fishing action year round. From black marlin, striped marlin and sailfish to roosterfish, wahoo, tuna and snapper, Cabo has a fish for all seasons, all reasons and all tackle. Moreover, Cabo is a great place to hang out and soak up some sun. Speaking from experience "If you go there once, you'll be there twice" (Cabo Wabo, Van Halen).

With a modern airport located a short distance away in San Jose del Cabo, arranging flights to Cabo is simple. After a quick search on the Internet, our flights were booked. Also, with the recent growth in development along the Baja Peninsula, one can easily find accommodations to suit any budget and taste. For this husband and wife trip, we elected to stay at one of the nicer beachfront resorts where one feels like a celebrity while still not breaking the bank. The final order of business was getting in touch with Tracy Ehrenberg of Pisces Sportfishing Fleet for a current fishing report and to arrange a charter for a few days of marlin fishing. Tracy has been managing Pisces Sportfishing for the last 15 years and provides the most current and accurate fishing information on Cabo San Lucas.

While fishing boats are numerous throughout the area, the most critical part of fishing success in Cabo is having an experienced and reliable captain, mate and boat. Since this is the specialty of Pisces Sportfishing, I was confident in booking a boat based upon Tracy's recommendation. Fishing boats in Cabo range from small open design pangas with 25-70 hp outboard motors to mega luxury yachts. The Pisces Fleet even has an ultra deluxe yacht with my wife's namesake, the 'Josephine' - a magnificent 80' Ocean Alexander that looks suited for royalty. As a side note this 'boat' was chartered by pop stars Boyence and Jay Z shortly after our stay in Cabo. I heard they even caught a few fish during their excursion. 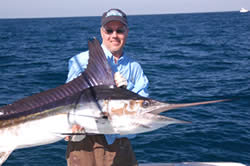 While our boat, a 28' Unifite, was 'slightly' more modest, the price was also well within our budget - costing less than a Lake Michigan charter for a full day of offshore fishing. Truly a bargain in the realm of big game fishing. Boats come complete with all necessary electronics, rods, reels, tackle, and an experienced captain and mate. Lunch and other refreshments can also be arranged ahead of time.

Since this was not solely a fishing vacation, I made certain to plan enough side activities prior to our fishing days. Accordingly, we had a full day of racing ATV's across the desert. We also enjoyed some rock climbing. Relaxed in the hot tub back at the resort. Soaked up the sun by the ocean. Swam in the pool. Took in the diverse shops and restaurants that Cabo has to offer, and enjoyed each sunset over land's end. Back home my weekend would have consisted of sitting on a bucket on a frozen lake and stirring down a hole - otherwise known as icefishing.

In Cabo the fishing days start before daybreak. With the stars still shining and yesterday's revilers doing their finest Cabo wabo back home, we made our way to the marina. The smell of diesel and fresh bait suspended in the heavy predawn air. Within minutes of making our way to the boat, our gear was stowed, and we were making our way to the harbormaster for clearance to depart. Next it was off to the bait barge to purchase ten live pacific mackerels. The bait barge is much like a floating drive thru at McDonalds. One places an order; passes the net, along with the cash, and within seconds, a scoop of lively mackerel is in the boat's livewell. Service with a smile. With bait in hand, we were steaming past the arch of Cabo just as the sun broke the horizon. Marlin were on our mind.

Striped marlin are one of the primary queries of Cabo fishermen. Nothing in freshwater can prepare you for your first marlin encounter. Marlin are big, fast, tenacious fish. Fishing techniques for marlin have some slight similarities to freshwater trolling and live bait rigging. Just like fishing for muskies, marlin are at the top of the food chain and landing a single marlin in a day marks a successful day. During our two days of fishing, we were fortunate to land and release six striped marlin, while 'jumping' three other marlin on three distinct techniques. Cabo has a way of spoiling anglers. 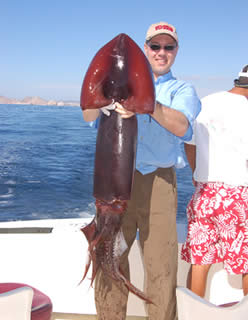 The first method for targeting marlin consists of trolling large plastic squid lures on the surface. Four to six lures are put in the trolling spread to skip, jump and dive across the surface at various intervals behind the boat. The 'take' from a marlin on a surface lure is explosive. An eight-foot long fish displaces a lot of water. Even more so when the line pulls tight, the hook hits pay dirt and the fish discovers that it's not getting a free meal.

However, much like muskie fishing, marlin can be finicky and often chase a lure without striking. At these times, a second technique is employed - tossing a nose hooked live mackerel back to a marlin that appears in the trolling spread but refuses to hit an artificial lure. To witness this game of 'cat and mouse' when a marlin gets hot on the trail of a pitched live bait will put one's heart in your throat. More times then not the marlin wins - the way it should be.

The final technique is to find pockets of bait and then fish marlin beneath the school. As the saying goes, it's a big ocean out there and one quickly learns to always scan the horizon for signs of fish while trolling. A flock of diving birds is the easiest and surest way to find fish. This epitomizes the food chain in full swing. Smaller game fish like tuna will corral huge pods of baitfish and push them to the surface. When the bait is tightly concentrated, fish slash through the school - eating and injuring countless baitfish. This in turn attracts birds to the surface activity, plus larger gamefish like dorado. All this commotion draws in marlin that take advantage of their distracted prey.

To fish marlin suspended below bait balls, a weighted live mackerel is hooked behind the dorsal fin and lowered below the bait school in the strike zone. Each angler holds a rod in their hand with the reel in free spool and bait clicker engaged. As the boat drifts through the school of bait, one occasionally jigs the rod to draw attention to the hooked bait. With this technique, strikes are not seen but are instead felt. As a marlin approaches a deep bait, the terrified bait takes off in a frenzy - telegraphing its displeasure up through the line and rod. When the bait stops thumbing and the line comes tight, its time to count to five and set the hook. Next, look to the horizon as an angry fish comes charging to the surface. Thanks to a strong conservation practice by the Pisces Fleet and the Mexican government, care is taken to release billfish unharmed whenever possible.

While fishing for marlin, incidently catches may include great eating fish such as tuna, dorado, wahoo and even giant squid. In addition to catching fish, one can often take in some interesting sights. During our most recent outing while my wife was battling her first marlin, myself and the crew were distracted for several minutes as a pair of huge humpback whales repeatedly breached off the port side of boat as the striped marlin leaped off the starboard side. We also were able to spot sea turtles, manta rays, sharks, seals and porpoises throughout the fishing day. This along with everything else that Cabo has to offer makes it a great fishing vacation destination. For more information on the fishing and to get current reports, contact Tracy at (619) 819-7983 or look up Pisces Sportfishing on the web at www.piscessportfishing.com.

Steve Ryan
Steve Ryan is an outdoor writer and avid angler who enjoys targeting trophy fish throughout the Midwest and beyond.
BITS & BITES
Advertise here