By Jeff Zinuticz - April 1, 2006
I can remember what seems like a million years ago for this young man, drifting in a 16-foot aluminum somewhere in the middle of Green bay off of Oconto, WI , fishing for perch with my father, pondering to myself why I was out there, and wishing I was doing something more exciting back on dry land. Most importantly I wondered why my father was in complete bliss, and honestly enjoying and savoring every minute we had in that boat. Mind you we did catch many perch, but still I didn't truly understand nor appreciate the moment of the experience.

A major part of this was being a child and naturally uninterested and bored by most things that didn't involve reeking havoc. And up until now I couldn't fully comprehend the transformation from a clumsy unenthusiastic child to the fisherman that I've become today, which I truly believe is my purpose and my purest form of enjoyment in this life. 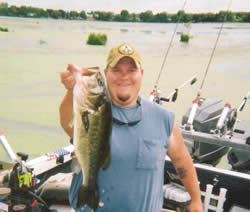 I often reflect back upon those balmy August days drifting in what seemed like an endless expanse of water to a naive boy, and wish I could re-experience those times with my dad so I could some how appreciate and absorb more of the time we shared. As time passed I began to more understand the purpose for our yearly trips and fishing. Eventually one day a light bulb went on, and although from what I feel and know now was for the wrong reason of solely catching fish, it was fun actually it was amazing.

Now I was the one up first, having a full thermos of coffee for my dad and buckets of minnows and rods packed in the boat ready to go at sunrise. I still didn't have as much love or respect for the sport that I do now. I learned a lot about fish, fishing, and life on those trips, mostly from my father who had been going to this particular resort since he was a child. I had also learned from the fish themselves, year after year I began to notice trends in when the perch would or wouldn't bite. Little did I know down the road this would end up being the most important factor in becoming a successful fisherman. I noticed certain weather patterns and various water related conditions and could almost predict when a good bite was about to occur, most of the time I was correct. However I didn't realize at the time that perch fishing then compared to now was in its hay day.

As the years pass times change and so do personalities but my dad and I always had that week; that was our week, and it was one that I anticipated all year. The preparation became more important to me, getting new rods and reels and going with dad to get new tackle especially small one inch plastic worms our secret weapon for those golden perch. Id have my gear packed and ready to go days in advance waiting for that long journey to Oconto, getting more antsy by the mile until we arrived at the cabins. I think a majority of the time my feet hit the gravel before my dad even stopped the truck, without as much as a bag un-packed I was off to the pier rod in hand casting in hopes that a fish would hit my lure. Soon after Id be reprimanded and told to get back and help un pack which I did, reluctantly.

You see, fisherman grow just as does their quarry. Many years of perch fishing on green bay along with stories, education, and respect for our environment especially the waters laid the foundation for my life as a fisherman. This subsequently would lead to my career choices as well, currently working in fisheries management with the Wisconsin Department of Natural Resources on Lake Michigan. Learning the way to fish and how to be a steward of our waters began to be more important to me and I found myself being engulfed with this desire to be more proficient at knowing about fish, their biology, and environment and to most importantly be a better fisherman.

I read as many magazines and watched just as many shows that I could on Saturday morning, meanwhile playing with my tackle and gear. I learned a lot then and still am today from those same pro's that I watched as a child. I still occasionally play around with tackle and new rods and reels daydreaming of future trips to the water. Eventually by the end of the 1990's the decline of the Lake Michigan Yellow perch hit Green bay and our annual trips to Oconto ceased. That was tough for us, but with low perch populations and dramatically reduced bag limits it was not feasible for us to head up there anymore. This by no means meant we stopped fishing, we just had more time to fish our home waters in the southeast most importantly Lake Michigan and its tributaries trying to catch trout and salmon my most favorite fish to target.

As I've learned volumes about inland fishes I have equally if not more so learned about Lake Michigan trout and salmon. I have put in more time educating myself and fishing for these magnificent fish than any other fish or game I've pursued. I truly love these fish, and as I sit here putting letters on a white screen cannot wait for that first trip this spring out to the big pond. This year is especially important to me because late last summer I purchased my own eighteen foot Yar- Craft. It's rigged up of course to fish the big waters of Lake Michigan. Trolling the open water for me is the most exciting and rewarding style of fishing I know of. I can't begin to re-call the days I spent casting from the local piers and watching as the boat anglers left the harbor on warm summer mornings, and saying to myself someday that's going to be me. That dream is now a reality for I.I very much appreciates every chance I get to be out and watch as the sun peaks out from behind the edge of the earth, and fall upon the water projecting an endless scene of diamonds. 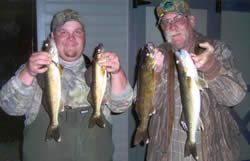 That's not to say you can't have the same fun on an inland lake, it just doesn't compare to being out on a great lake, it truly is a world of its own. If you've never experienced trolling on the big pond I strongly suggest hooking up with a charter boat or a friend and making a trip out there, you will definitely be hooked just as I am.

Some of the most memorable times I've had on the water didn't involve catching fish. There was a time when a good friend and I shared a moment on the Chippewa Flowage when the sky opened up and a storm that should have pushed us off the water sent us to a rock bar were we continued to toss buck tails through lightening strikes, hail, and thunder, that day was one of my most idiotic but yet humbling, I felt privileged to have been there and seen what mother nature is capable of. There have been times while at work with the WDNR on Lake Michigan when I've had to look up to see the crest of waves and never felt more alive, I re-call a night on a Three lakes chain lake with my sister, brother-in-law, and a childhood buddy when I caught the biggest Smallmouth bass I've ever seen, that friend is now serving our country in Kuwait and I pray everyday that we'll be able to make many more memories together such as that night.

Fishing for me is a lot more than feeling that tug on the end of my line, it's the moments that lead up to that, its breathtaking sunrises, and sunsets, it's the sound of waves lapping against a shoreline, or the constant words of a flowing river, its watching as a rod jumps up after being released from a downrigger because a feisty Chinook Salmon has just crushed a spoon on the other end. That Chinook would ironically be the first salmon boated in your own rig. It's witnessing the excitement and pride on my fathers face after catching his first fish out of the lake that he and my mother retired to, and thinking to myself no one I know deserves this more than him.

I could go on and on about the way fishing has enriched my and many other lives but that would fill many notebooks and cause my hand to cramp more than it is.

Although I fish the rivers and some lakes alone now, the memories and fundamentals I've learned along the way are always there to keep me company. I tell friends and other people I meet along the water that fishing isn't just something you do to past time it's a lifestyle at least it is for me, and if you can take in what you experience and feel when your out there on our waters, your lives will be enriched and you have already won half the battle. Fishing isn't something I do, it's what I am

Jeff Zinuticz
For up to date fishing reports log onto www.lake-link.com
TRENDING DISCUSSIONS
Advertise here
Advertise here
Please take a moment to visit our sponsors. Without them we would not be here.