Another Fishing Season of Learning

By Bob Jensen - December 1, 2005
Anglers should learn something new about fishing every season. If you don't learn something new every year, then you probably aren't trying different techniques or different bodies of water or different somethings. And that means you aren't catching as many fish as you could or should. Following are a few things that I learned or re-learned in the fishing season that just passed. 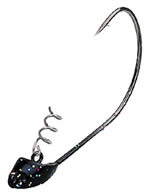 Plastic and plastic look-alike baits are becoming a bigger part of our fishing every year. We've been putting plastic on jigs, spinnerbaits, and spinner rigs for years. This year a new rig for plastic was introduced called the Jungle Jig-Loc. The Jungle Jig-Loc is an over-sized, wide-gap hook with a small piece of lead molded onto the hook-eye. Coming from the lead back toward the hook is a small corkscrew shaped piece of small wire. Your plastic is twisted onto the corkscrew, then inserted onto the hook. The plastic stays straight and is weedless, so you can fish through the heaviest cover or reeds effectively. It's a great rig for taking bass from heavy cover.

I really learned this year that, although it looks like plastic, Gulp! is different. It worked at times when traditional plastic wouldn't. Gulp! is actually an organic material that biodegrades. On your hook it releases scent faster and in much greater quantities than scent-enhanced plastics. And, because it biodegrades, we aren't littering the bottom of the lakes with plastics. Gulp! is changing the way angler's fish.

So much of the time bass anglers hop rubber-legged jigs across the bottom for largemouth bass. This year I saw first hand how effective those rubber-legged jigs could be when used in conjunction with a swimming retrieve. Craig Peterson, one of the best bass catchers in the Midwest and I were fishing Jungle Jigs in deeper rushes. I was using the traditional retrieve of dragging the jig along the bottom: Craig was swimming his jig much like you would retrieve a spinnerbait. Craig was catching a lot more fish than me. I started copying his retrieve and started catching more fish. You will too if you swim your rubber-legged bass jig more often.

If you keep an open mind when fishing, you're going to catch more fish. If you're fishing with someone and they're catching most of the fish, take a minute to pay attention to what they're doing differently. Don't just ask what bait or color they're using, really pay attention. Maybe the line being used is part of the deal; maybe the reel being used has a faster or slower gear ratio that makes the bait move faster or slower. Little things really make a difference. Generally there is no major thing the successful angler is doing; it's just one or two smaller things. If you pay attention to the small things, the big things will take care of themselves, and you will be more successful at catching fish.