Spicing Up for Autumn Appetites 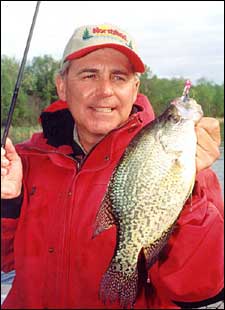 In its simplest form, the hamburger is a slab of ground beef sandwiched between two buns - genuine Americana, but boring. Same can be said for the jig. It's a formed hunk of lead with a hook sticking out its backside - classic, but boring as well.

Surely, despite its plainness, you could find someone to gobble the bland burger, but it might take awhile. What if that baby were spruced up? Might the number of suitors swell? Likely. So begin by adding slivers of provolone and Munster cheese. Next, maybe a crisp hunk of iceberg lettuce and a ripened tomato slice. Perhaps two or three strips of blackened bacon and kosher dills. Top it all off with Dijon mustard and ketchup. Now that'll trigger mass salivation.

The basic burger was "spiced up", given greater appeal. That ugly old lead ball can undergo similar transformations. By bestowing new and unique looks it's possible to amplify the volume of strikes, as well as improve the average size of fish on the line. And during no other occasion does this so-called spicing enhance total fishing performance than in the fall.

Believe it or not, fish tire of lures. Technically, they become conditioned. After enough visitations by a lure of the same size, shape, and color, a given school of fish, even alike species in an entire section of a lake, will feign interest, eventually fleeing from the presentation altogether.

Changing colors helps surmount the predicament, so too does upsizing and or downsizing. Sometimes, though, wholesale lure changes are requisite, like opting for a jig after a crankbait bite fades. But equally as often, it's possible to both revive a bite and trigger formerly uninterested fish by dressing up a proven presentation. Essentially, fabricating something they've never encountered before.

Let's begin with walleye applications. In autumn, walleyes take to the current. Maybe its instinctual; possibly the summons of a higher power. Might just be the minnows. Regardless, they nose into the flow and turbidity with a mindset to feed.

So fin and forage they do. But notwithstanding the fact that food is abundant, conditions aren't ideal for finding it. The water's dark, turbulent, and noisy, shrouding both natural forage and any lures swimming about. Truthfully, walleyes will smack about any arrangement of jig and minnow that's offered, but only if they stumble onto it. That's the real dilemma.

Overcome this obstacle. Give your jig a cosmetic makeover that begins with audible alterations. Certain sounds are proven to draw walleyes. A jig banging on rocks generates resonance and beckons fish, but the lake floor isn't always solid enough. Artificial rattles to the rescue. Rattle components, like the Northland Buck-Shot Rattle Shell, threaded onto the collar of a jig provides desperately needed sound.

The flash of a blade also supplements the ho-hum jig. Even a florescent or glistening metallic jig is bolstered by a spinner. And besides visual appeal, rotating blades emit detectable vibrations. The Northland Thumper Spin does just that, adding twinkle and thud to the everyday jig. Several manufacturers offer bladed walleye jigs to boot.

Appetites continue to develop. Fall prompts walleyes to focus on enormity as well as quantity. With that in mind, it's shrewd to upsize, but not necessarily boost overall lure weight. To accommodate the dichotomy, affix a 2 to 4 inch plastic grub - curly tail or shad - onto the jig's shank. The newly fashioned bait is larger, but fishes slower, especially in heavy current. And for comparison sake, conduct tests with and without live minnow additives.

In stained to murky water, choose a grub color that contrasts with the jig head, like a pink cranium with a white body. Clearer conditions call for correspondence. White heads with white bodies, black with black, and so on.

Like walleyes, northern pike and muskies also invigorate in autumn. Big eats are on the menu, but with a preference for slow moving morsels. Run your baits too fast and it'll be a day plagued with short strikes. To counteract nips, though, a trailer or Sting'r Hook can be attached. Trailers are also mandatory for jigging with large minnows - light suckers, redtails and creek chubs - which are popular fare in autumn.

Inline bucktails and jumbo spinnerbaits - hairpin spinners - are confirmed pike and muskie assassins. They flaunt large profiles and can be operated either fast or unhurried. And by adding a 4 to 6 inch soft plastic grub both styles appear chunkier and maneuver even slower.

Speaking of bass, they too will eagerly swallow jigs in autumn. And one way to expand the silhouette of a bass jig is by attaching a second skirt, giving it more plumage. Put it on backwards, and you've created a frighteningly large aquatic spider. A second skirt can also be slipped onto a spinnerbait, granting it enhanced size and deceleration.

While on the subject of spinnerbaits, it's logical to discuss blade modifications. Bettering blade size amplifies overall mass and allows the bait to be fished at a snail's pace. On a 3/8th ounce spinnerbait, for instance, the customary #5 Colorado blade can be exchanged for a #6 or #7. The alteration intensifies vibration, reinforces size, and causes the bait to creep instead of cruise.

Panfish respond favorably to spiced-up lures too. In the fall, when large crappies reappear from a summer of concealment, they're fools for a jig and minnow, but not dinky crappie minnows. Oftentimes, the tubbiest fish are taken on fatheads, chubs, and shiners - spicy minnows for sure.

Jig and spinner combinations also portray a bigger meal while engendering more appeal than a plain jig. Beetle Spins perform tremendously. And that same look and feel can be imparted to a conventional jig by implementing an aftermarket overhead wire spinner. More flash, more magnitude, and the capability to be worked leisurely.

The ledger of potential lure modifications is endless, many even more technical and customized than what's been described. But those advanced tweaks are personal and designed in reaction to specific conditions. Your own renderings will come with time, and perhaps grow from the aforesaid suggestions to convert that uninteresting burger into a culinary masterpiece.

John Peterson
John Peterson is the President Northland Fishing Tackle. John has been fishing for over 40 years, and has been active in many of sport fishing tournamant and promotions throughout the US and Canada. He won the prestigious '96 Professional Walleye Trail tournament on Lake of the Woods, and is a six time PWT championship Qualifier. John was a past Muskie, Inc. tournament winner, and top ten finisher on the Minnesota State B.A.S.S. championship.
TRENDING DISCUSSIONS
Advertise here