From the middle of summer and through most of the remaining open water fishing season, fish are going to be eating. That's all they do this time of year. In fact, except during the spawn period, a fish's life revolves around eating. In the spring, smaller baits will usually be most effective for fish catching, but from mid-summer right through the fall months, big baits are going to catch big fish. 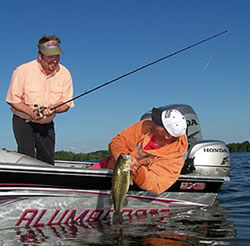 The same thing holds true for bass. My boat partners and I have taken largemouth and smallmouth on spinnerbaits that were being thrown for muskies.

I wouldn't suggest that an angler should target bass or walleyes with musky baits, but if you want to catch larger fish, it is a good idea to up-size the lures or live bait you're using.

A jig/worm combination is a great way to catch largemouth bass. A six or seven inch worm is very popular. But if you want to increase your odds of catching a true trophy, try a ten inch worm, or select a bait that is very bulky. Power Hawgs have proven themselves to be great for big bass. They have legs and flippers all over their body, and big bass really go for them.

As we get closer to the autumn months, big live minnows can't be beat for walleyes and smallmouth. A five or six inch redtail on a Roach Rig or Fire-Ball jig won't last long if a walleye or smallmouth see it, and a larger redtail will be better if you can find one. Some anglers like to go with suckers for smallmouth or walleye because larger suckers are more available than the redtails.

Crankbaits are another excellent big fish bait in the summer and fall. Frenzy Diving Minnows have put lots of big walleyes in my boat the past few years. Smaller crankbaits will sometimes catch more fish, but the big baits will definitely produce the really big ones. There are times when the fish will prefer a smaller bait this time of year. If weather conditions have them shut off, go with something a little smaller.

If you can see fish on your electronics but they won't take the big bait, try something smaller. But when the fish are willing to bite, go with a big bait and you will catch more big fish.