By Mike Mladenik - July 1, 2005
July can be a frustrating period for anglers even tough fishing can be good. The key to success in July is knowing the specie you are pursuing and knowing the best type of water to fish. Being a full time guide for over 20 years I have developed several patterns that are productive in July. Here is some advice on where and how to fish this summer. 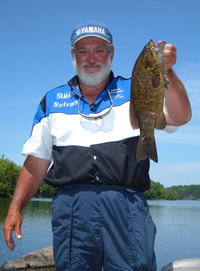 The most consistent pattern for summer is river smallmouth. While other species may feed on a regular basis in summer it is often hard to nail down a distinct pattern. Walleyes for example can be active one day with the bit being tough the next day even without a weather change. Toss in a cold front or recreation boating and fishing can be very tough. River smallmouth are less affected by weather changes and recreational boating is almost non existent. Summer smallmouth will adapt to specific feeding patterns and once you are aware of them they will produce on a daily basis. Often these same patterns will be productive from year to year. So once you find a productive area, if you practice catch and release, you will be able to catch fish for years on end.

Pay close attention to the current and water levels since this will be the largest contributing factor to smallmouth location. If water levels are low which is common in July look for most active smallmouth to be feeding in mid river rock structure. These areas are loaded with crayfish and smallmouth can hold here for long periods of time. Smallmouth will also move in and out of the area so you will encounter a variety of sizes in the smallmouth you will catch. Some of the largest smallmouth will move into the rocks at midday. Grubs, crankbaits, topwater baits and nightcrawlers can all be effective and be prepared to use all of the above.

When water levels are on the rise, look for most smallmouth to be holding tight to shoreline cover. The higher the water the tighter smallmouth will hold to the bank. Spinnerbaits and soft plastic jerk baits are the most effective baits for these bank hugging smallmouth. Both these baits are weedless and can be fished tight to cover. If you cast away from the cover you won't catch smallmouth. My favorite technique when fishing shoreline cover is fishing a soft plastic jerk bait Wacky Style.

For walleyes the best action will occur after dark on many natural lakes but on rivers walleyes can be active throughout the day. Flowage walleyes would be my first choice in summer. Flowage walleye feed both early and late in the day. The morning period is best since it will last for long periods of time. At dusk there is a hot bite but it can last only for a short period of time. In the morning walleye will move into both weed flats and wood. Weeds are easier to fish and will hold the highest concentration of walleyes. Work the weeds with a Tin Man Live Bait Jig tipped with a leech or crawler. The combination of the lighter tin and high reflectivity of the gold, silver and copper plating is deadly on summer walleyes. If prefer to use a jig and plastic use Tin Man Jigs with a barbed collar.

July can offer excellent musky action in lakes, flowages and rivers. Like walleyes the most consistent action on natural lakes in summer will occur after dark. Off shore humps and weed beds on the edge of bays will attract the most active muskies. If you are looking for large muskies concentrate on humps and weedline with close access to deep water. The larger muskies seldom leave their deep-water homes. Once you learn a lake you figure these movements you can experience quality muskie fishing in July.

If you prefer more action, or just don't like to cast for musky after dark, concentrate on river. Sure you will get into good musky fishing early and late in the day but daytime fishing can be tough unless you are fishing during pre-frontal conditions. River muskies are active in summer and you will be able to avoid the boat traffic.

Summer river muskies will relate to shoreline cover, rocks and weeds. Much will depend on the individual river and the available cover. Forage is also important and will dictate musky movements. It is common for muskies to hold tight to shoreline cover when they are not active. However unlike lake muskies which hold in deep water when they are inactive these river fish are shallow. River muskies are also more aggressive and being shallow are easier to trigger a strike.

The topwater bite in summer can be awesome. River muskies are aggressive and move a considerable distance to chase a surface bait. When fishing a surface bait have a follow up bait rigged on another rod. If the muskie follows back to the boat but does not strike the surface bait toss out a bucktail in the direction of the fish. Start a fast steady retrieve and make a figure 8 at boatside. The one two punch of a surface bait and bucktail has proven deadly over the years.

So if you are looking for both consistent action and trying to avoid the crowds, head for the river. You will find a variety of fish species to choose from. And enjoy some wonderful scenery.