Musky Fisherman all have there favorite lake. Over the years a specific lake has been good to them and has produced not only a trophy musky but consistent action. While having a favorite musky lake is fine, there are times when it will work to your disadvantage. One time when you should forget about your favorite water and go for the percentages is during the early season. 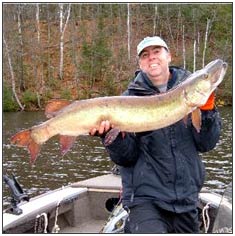 When picking water to fish during the early musky season shallow stained water flowages top the list. The more shallow water available in the flowage, the more active muskies will be. Try to avoid flowages where most of the flowage has water deeper than twenty feet. Deeper flowages will have a greater amount of water passing through and take longer too warm. The size of the flowage is important, since a smaller flowage will also warm quicker. Flowages under 1,000 acres are the first ones to see active muskies. Besides numbers of muskies, often these flowages can produce a few big fish in the early season.

A musky fisherman never has enough room. My new Sylvan 18' Sylvan Avenger is an ideal musky boat. The large bow platform allows for stability and ample room for casting and landing a trophy. Powered by a 150 hp Yamaha Four Stroke, you can quickly move from spot to spot. With the boat being rigged by Action Marine I know I am able to handle any situation. Covering water effectively is important when searching for active muskies.

Shallow muck filled bays loaded with wood are prime areas to fish on the season opener. The combination of muck and wood warms quickly. With the warmer water temperature, even large females can recover quickly after spawning. Large trophy muskies will relate to extremely shallow water under these conditions. Not only will they move into the area to feed, but also they can remain there for long periods. Both downed wood and stumps can be equally productive. Look for wood next to an inlet entering a bay to be a prime feeding area. Largemouth bass, pike, and panfish will relate heavily an inlet. With muskies being at the top of the food chain, they won't be far behind.

When fishing wood, it is important to be mobile, and concentrate only on active fish. Use caution when moving into the shallows, being careful not to spook a large musky. Both bucktails and shallow running crankbaits are effective at this time. If you are fishing with a partner, then you should use both presentations. When choosing a bucktail, use a smaller blade and a slightly neutral color dressing.

Although the water may be stained, there is good visibility in the spring. Rust color, black\chartreuse or black\orange are top colors. Leave the bright fluorescent colors for mid summer. Small bucktails with rubber bodies are also deadly in spring. If stable weather patterns are the rule, use a faster steady retrieve with the bucktail. After the passing of a cold front, use a slower retrieve on the bucktail. Although most strikes will occur, the first few feet of you retrieve, it is important to make a figure 8 back to the boat.

Often twitching shallow running crankbaits will be more productive than bucktails. With the primary forage being either small baitfish or crappie, these baits can be very effective. Smaller six-inch baits are more desirable since they most resemble the forage. Crane Baits have been my most productive bait twitch bait during the early season. Pitch the bait as tight to any wood cover as possible. Often a musky will strike the bait as it hits the water so be prepared. Slowly work the bait back to the boat with short twitches, keeping the bait from breaking water. As with a bucktail make a figure 8 since strikes will occur at boatside.

Match your bait to the preferred forage. Again, the water visibility is good so there is no need for bright colors. Natural color patterns like black\white would be my first choice. The type of rod and equipment you use will make your presentation more effective. When twitching a shallow running crankbait I prefer a 6'6'' rod. When fishing bucktails I prefer a 7-foot rod.

Besides wood, prime areas will also sprout fresh weedgrowth. Some flowages will have an abundance of weeds while others will see only limited weedgrowth. Fresh weeds will hold the most active muskies. Even if the weedgrowth is limited expect to find a few active muskies in the vicinity. In June weedgrowth can spring up over night so look for fresh weeds each day you head out on the water. 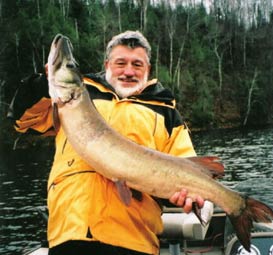 When fishing weeds work your baits as slow as possible if you are looking for large muskies. Big spawned out females will hold in the weeds but will not chase. Over the past few years I have had a few seasoned fly fishermen catch big muskies in the fresh cabbage. This slow finesse presentation will trigger a strike from sluggish female muskies when they won't chase a bucktail or twitch bait. Perch and crappie pattern flies are good bets in stained water.

Musky activity will peak during the late afternoon and early evening. Seldom will muskies be active at the crack of dawn early in the season. Later in summer being on the water at sunup may be the only way to boat a musky. Night fishing is also not as productive as it is later in the season. This is one time of year when you will actually benefit from rising late in the day.

The early season can be a time of plenty for all species of fish and muskies are no exception. While there is never a sure thing, you can increase your odds. While you may not get that 50 incher, you should encounter plenty of consistent musky action. Do some hunting and check out new water