Over the years I have written many articles on pre-spawn smallmouth. The more I study pre-spawn smallmouth I have come to the conclusion that we need to focus on both the early and late pre-spawn periods. It is the early pre-spawn period that receives little insight. At this time it is anyone's guess what the water temperature will be. This pre spawn period can be unpredictable since the weather can be like a roller coaster. Unfortunately this unstable weather will also bring unstable water temperature. This is way the action can be hot one day and cold the next. It can also be prime to catch a giant smallmouth.

Last May a few days after the season I went out on one of my favorite reservoirs with my good friend Gary Martin to film a segment for my television show. As usual we had great weather a few days before we went out to film. I told Gary that the fishing may be tough but that we have a shot a catching some huge smallmouth. Gary was excited to be on the water and was not only eager to catch a big smallmouth but was also eager to check out my new Yamaha four stroke. The bite was light but we managed to boat four smallmouth between five and six pounds.

As I explained on my Television show we were dealing with typical pre spawn conditions and had to know exactly where these fish were going to be. Not only was the location important but we needed to refine out presentation. If our location was off only a few yards we would not catch any smallmouth. If our presentation was not precise we would not catch any smallmouth. Even though we were dealing with less than ideal conditions I explained to Gary that these fish were feeding and catchable.

As the water temperature rises into the low to mid forties smallmouth will begin to move. They will move off the deep edge of a point and stage on slower tapering edges. Any downed wood on or near the point can hold a load of big bass. What happens is this wood will retain heat on a sunny day and the water temperature can be 2-3 degrees warmer. The best wood will be on the downstream edge of the point out of the current and have rock and rubble mixed with the wood.

My favorite presentation when fishing this wood cover is a three or four inch grub or a three inch tube. Both the tube and the grub bare rigged weedless with sickle hooks. Since I have been using the sickle hook with the unique 90 degree bend I seldom use regular wide gap hooks. Instead of using a worm weight tight to the bait I will either clinch a split shot 2 foot up from the bait or attach a swivel and use a finesse sinker. This method allows me to crawl the bait as slow as possible on the bottom with an occasional pause. If I used a jig head or weighted hook I feel that a big smallmouth will drop the bait.

It is the pause that will catch big pre-spawn smallmouth. The longer you can let the bait sit the greater your odds are to connect. One method that was deadly for me last year was working a 5" Salty Sling on a Carolina rig. I would rig the Salty Sling through the head with a number 4 live bait hook and make a two to three foot leader with fluorocarbon line tied to a swivel. At the swivel I would use a finesse weight which is a narrow cylindrical weight that can slide feely on the line. 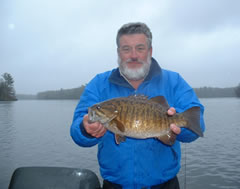 I have experimented with plated finesse weight with great results. By plating these weights with gold, silver and copper the smallmouth are attracted to the high reflectivity of the metal plating and will hit the salty Sling with savage strikes. One deadly presentation was to let the Salty Sling drop and just lift my rod tip up with a short twitch. The bait would fall and in a few seconds I would often feel a strike. After a strike is felt let the bait sit again for a few seconds before setting the hook.

Unlike clear water lakes smallmouth do not seem to chase baits in the early pre-spawn period. On natural lakes suspending jerkbaits are deadly. Big smallmouth will move great distances to slam these baits. I feel that these big smallmouth are starting to feed and are keying in on suspended baitfish. Pre-spawn smallmouth on a stained water reservoir are feeding primarily on crayfish. The crayfish are also holding very tight to cover and smallmouth will feed accordingly. So understanding the preferred forage is yet another key to catching big pre spawn smallmouth.

Even tough the smallmouth are feeding on crayfish they will also hit live minnow presentations. While all the above presentations will catch big early season pre-spawn smallmouth it is still hard to beat a jig and minnow. This presentation will catch smallmouth even under the worse conditions. Being a guide I have learned to always have some minnows in the boat.

When fishing a jig I like to use Tin Man Jigs. With the tin jig being 40 percent lighter the smallmouth will feel less resistance when hitting the jig. The reflectivity of the plating on the jig is an attractant and acts to trigger the smallmouth. Tin Man Jigs are plated with gold, silver, copper and black nickel. Work the jig as slow as possible with that occasional pause. As with the plastics look for the strike to occur on the pause.