CATCH WALLEYES EARLY IN THE SEASON

Throughout the Midwest, the early season walleye bite starts at different times. The farther north, the later the start. Some states allow anglers to start chasing walleyes whenever possible, other states require us to wait until the season opens officially. Wherever you live in the Midwest, you can fish for walleyes right now. You may have to drive to an area that allows for walleye fishing, but if you want, you can fish for walleyes right now. And that walleye action can be pretty good this time of year as well. Following are some ideas for taking advantage of early season walleyes.

This is the time of year, in many bodies of water, when wading anglers will have just as good a shot at action as those anglers fishing from a boat. The walleyes will mostly be close to shore and in shallow water early in the season, with the best time for fishing being late in the afternoon and early in the evening.

Jigs are going to be the top choice for most walleye anglers in the early season. In fact, if limited to one bait presentation, many accomplished walleye anglers would reach for a Fire-Ball jig tipped with a minnow. This jig has a short-shanked hook, enabling the minnow to be hooked so it is right up against the head of the jig. This creates a smaller appearing presentation, which is best early in the year.

At times a dragging presentation will be best. Simply dragging the jig along the bottom will take the most fish. Too much of the time, anglers like to jig their jigs, imparting lots of hops and action to the bait. While this can be good when the water is warmer, a jig that is being dragged along the bottom, even stopping it every now and then, can be best early in the year. 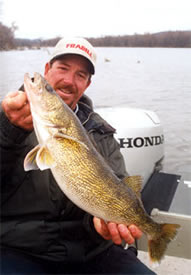 More and more, anglers are tipping their jigs with plastic, with a two or three inch Power Grub being the top choice. While a dragging retrieve is best with a jig/minnow, a swimming retrieve just a couple of inches above the bottom will be better with the jig/plastic combo. However, you want to keep the jig moving slowly. This could require a lighter weight jig. If you were throwing an eighth ounce jig with the minnow, go with a sixteenth ounce head with the plastic. This will allow the jig/plastic to be worked slowly.

It is hard to beat six pound test Trilene XT for this presentation, and a lighter action rod will also allow more soft-biting walleyes to be detected. A medium-light action Lightning Rod or Series One Rod in the six to seven foot length will be just about right.

Most of the walleyes caught this time of year will be the more aggressive but smaller males. If you want to keep a couple for the table, keep the smaller ones and, if you should get lucky and take a big one, put it back. By doing so, we will increase our chances for continuing to have this early season walleye action to look forward to.