Leave the bacon in the frig - time to fish with Kirk!

Giggles resounded from the other end of the telephone.

Not the reaction I expected while ordering a Texas fishing license over the telephone. After providing the licensing agent with the usual name, address and date of birth information, I inquired about any special fishing tips or locations. 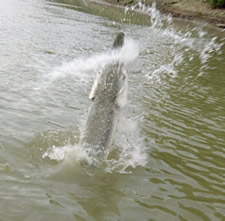 The agent spontaneously boasted of such great Texas bass lakes as Lake Fork and Toledo Bend. I pointed out that my fishing partner and I were traveling more than 800 miles to Texas to target something much larger -- massive 100-300 pound alligator gar.

That's when the giggling began. After composing herself, the agent offered her best gar fishing advice: "put a piece of bacon on the hook and toss it into any creek around Houston!" I never did find out if that was cooked or uncooked bacon?

Even with the aid of the internet, finding good information on alligator gar fishing can prove difficult. About eight years prior, I had relied on a publication that touts itself as being the foremost authority on all of freshwater fishing and wound-up spending three days in the hottest part of Texas - in August - with a bass guide - fishing jug lines for gar. We never catch a single alligator gar on rod and reel the entire trip. Instead, we dripped sweat until our pores became clogged with a film of oil from a nearby refinery, and I started to believe the rumors that alligator gar were nearly extinct! I vowed that this trip would be different.

Through a French contact in Thailand, I had learned of a Texan who had quietly been guiding mostly European anglers, for the last several years, to huge gar on rod and reel. The Texan in question was Kirk Kirkland. After my first telephone conversation with Kirk, there was no doubt that he was our man. Kirk advised me how, where, when and why we would be fishing for alligator gar averaging close to a hundred pounds. Kirk provided me with his credentials, photographs of what to expect and I was ready to catch some gar.

Not long after arriving in Dallas, Kirk was backing up everything he had told me about the incredible alligator

gar fishing on the Trinity River. Within thirty minutes of being on the water, I was hooked up with a fish that I had waited nearly thirty years to do battle with. As a kid I recall flipping through the pages of old Outdoor Life magazines and seeing photos of anglers doing battle with these enormous beasts of a fish. A fish that has inhabited the earth for tens of thousands of centuries longer than most species and looks as though it could take off your face with one swipe.

With our first big fish at boatside, I tossed off my shoes and hopped into the water with a 7-foot plus, 150-pound alligator gar. I briefly wondered if I had lost my marbles. However, my compulsion to get photographs of the fish in the water took over.

From the boat, my fishing buddy Dale offered some obvious advice:

"Don't let him bite you." Kirk was slightly more positive.

"Steve, stay behind him so he can't see you, and watch if he swings his head!"

And I thought, why? So he can't bite me?

Not looking to lose my marbles or any other part of my anatomy, I heeded both pieces of advice. After a few private words exchanged between the gar and myself, I corralled the fish for a few photographs before removing the hook and releasing the fish. Thus enter the world of catch and release alligator gar fishing. 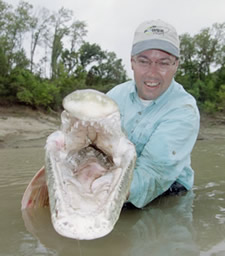 Notwithstanding their sinister appearance, gar are not overly aggressive when left unprovoked. However, catching a gar on rod and reel, making several attempts to safely slide the fish into a cradle to be weighed and then wrestling it to shore for photos, could qualify as provoking. With that in mind, the gaping mouth full of needle-sharp teeth is an obvious area to avoid. Kirk further explained the danger that alligator gar can pose when swing their head with a closed mouth. Not only is their head hard as a rock, but they also have a terrible overbite that leaves two large upper teeth fully exposed even when their mouth is closed. Finally, there are the sharp diamond-shaped scales and the force that their 6-8 foot long body can generate when thrashing about the bottom of the boat.

Through all of recorded history there are next to no documented cases of gars attacking humans. Of course, there is the story of a Louisiana boy nearly losing his foot to a gar while dangling his feet from a pier. Stories also circulate of small villager children in Nicaragua being snatched from the riverbank by giant gar. These stories of monstrous 12-15 foot man-eating gar weighing 1000 pounds add to the legend of these fish. Most anglers recognize these stories as fishing lore that gets passed down from generation to generation and never stops growing. Modern records place a more realistic top end size of alligator gar at ten foot and in excess of 350 pounds, with a life span of more than 75 years.

Although alligator gar are the second largest freshwater fish in North America, relatively little scientific research has been conducted on them. A brief review of my own private collection of fishing books revealed little relevant information. A 1952 copy of the National Geographic Society's 'The Book of Fishes: Food and Game Fish and Aquatic Life of the Coastal and Inland Waters of the United States' included just one photograph of a dead and bloody gar hanging from a rope with a board wedged in its menacing mouth. 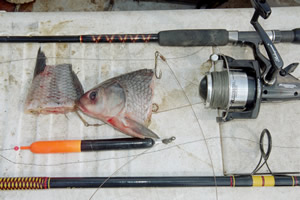 The caption described the gar as a predaceous species that destroys much valuable food fish while its own flesh is tough and unpalatable. Not a very favorable review, even though I know many people who describe gar meat as being quite tasty, and recent studies reveal that gar feed predominantly on rough fish and crustaceans.

By the 1970's, 'The Fisherman's Field Guide to the Freshwater and Saltwater Gamefish of North America', by Robert Elman, had not softened the stereotype of alligator gar by describing them as "destructive pests" with "murderous teeth" that should be dispatched with a gun if hooked. The publication also foretells the demise of their broad distribution by noting that the renowned population of giant gar in Arkansas' White River had been adversely affected by cold water flowing from newly constructed dams.

Through the 1970's and 1980's over fishing and loss of habitat resulted in alligator gar being extirpated from much of their natural range. By the 1990's, several states had listed alligator gar as endangered or had taken measures to reduce the commercial fishing pressure on the remaining stock of these unique fish. Then in the last decade, a renewed interest has grown in targeting these huge fish - predominantly by bow anglers in the states of Texas, Louisiana, Alabama, Mississippi and Florida. 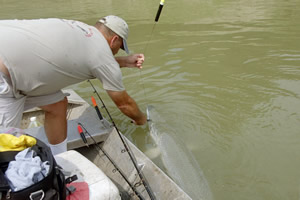 Fast-forwarding to the present and I can assure you that there is a thriving population of big 100-300 pound gar in Texas. In less than two full days of fishing with Kirk Kirkland, we were able to catch and release a dozen big fish, including four fish well over 100 pounds and several other fish in the 60-90 pound range. The technique for targeting these large alligator gar is relatively simple - a big piece of meat and heavy tackle.

More specifically, bait a 4x strong size 5/0 Gamakatsu treble hook with a two-pound chuck of freshly caught rough fish such as carp, drum, sucker or buffalo. Since alligator gar have a full allotment of sharp teeth, a four-foot length of 200 pound uncoated wire leader is in order. Next, add a slip float to 150-pound test PowerPro as the main line so that the bait can floated at any desire depth or allowed to rest on the bottom with the float acting as a strike indicator.

An appropriate rod and reel combo consists of a Shakespeare Freeliner Reel and a long 10'6" Ugly Stik rod. The Freeliner reel takes its name from a special rear lever that when switched on allows the spool to go into free spool. This allows the fish to freely take line from the reel with absolutely no resistance. A switch of the lever instantly engages the spool to set the hook and fight the fish. The Freeliner is spooled with super tough 150-pound test PowerPro microfilament line and coupled with a 10'6" Ugly Stik rod. Since the Trinity River is loaded with flooded timber and gar have a knack to finding these snags, the heavy PowerPro line helps to horse big fish away from or pull them through heavy cover. The long Ugly Stik rod serves several purposes. First, its added length allows for longer cast from an anchored boat. The rod has an incredible amount of power while still maintaining enough cushion to allow for a more enjoyable battle on this heavy gear. 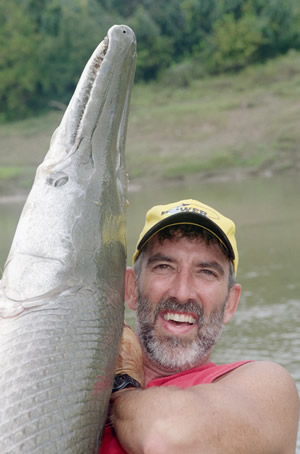 While gar are generally associated with stagnant sloughs and back waters, we generally fished slack water areas immediately adjacent to deep outside bends in the river. Generally, four rods were deployed. One rod on the near shore bank upstream of the hole; two rods down stream of the hole on the near shore and one rod on the edge of the hole. Half the baits were fished on or near the bottom while the remaining baits were fished within the top four feet of the surface. Spots were fished no more than thirty minutes without a bite.

Up to three or four fish could be taken from a single hole before the gar would start to get wary. Since gar have both gills for breathing under water and lungs for gulping air above the surface, large gar would show their displeasure if we overstayed our welcome by coming to the surface to blow water and make noise.

When a gar takes the bait, it is generally a slow deliberate bite. The float slowing goes down or is drawn downstream less than 50 yards. The gar then stops for several minutes to get serious about eating the bait. Once the fish moves again, it is time to set the hook. Upon putting pressure on the fish, gar often come to the surface for a series of leaps and jumps. Large gar make several upstream runs looking to tangle in logs. If that doesn't work, they often move downstream or try to lie on the bottom. Finally at boatside, gar again thrash menacingly on the surface with their mouths wide open.

Next comes the release. Gar can easily be released at boatside by dislodging or cutting off the hook. For the more adventurous types, a quick hop in the water makes for a more personal release photo.

If you want to experience this unique fish on rod and reel, give a call to Kirk Kirkland. Having fished gar his entire life, Kirk likely has more knowledge and experience of catching and releasing giant alligator gar than anyone else in the country. Kirk knows hundreds of miles of the Trinity River and has an adventurous spirit to fish areas few can reach. Kirk can be contacted at [email protected] or (214) 557-1422.