In a well worn ritual, March is often the first month of the year in which Midwestern anglers shuck off their icy cocoons, dust off the spinning tackle and head out to do their first open water fishing of the coming season. With the majority of game fish seasons closed, their targets are river systems where lethargic walleyes have felt the river water temperature warm incrementally, rise quickly with runoff and take on a color that begins to hold the sun's energy.

Males, as is common throughout nature, are first to the spawning table, rushing up river to the first blockage they find, often a dam. There they will mill around and wait for the egg-heavy females to make their way upstream. Understanding the whereabouts of both genders can give you an edge in determining where on the river system you want to fish. Both males and females will eventually end up together when the water temperature is right, but until then they act differently. 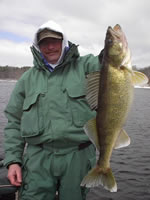 Do you want hot fishing action and don't mind if the majority of the fish you catch will be short males, with perhaps a few legals thrown in, head for the dam. There you will find the most aggressive males on the river system, waiting for the females to show up. Are you interested in working hard for the chance at a trophy? Then get away from that dam and work areas along the main current downstream. Concentrate on deep eddies, creek mouths or undercut banks at the outside bends on the river. The big females will often move very shallow in feeding areas proximate to the deep main current. Take your trophy, photograph it and release it to finish its spawning run.

Walleyes are tolerant of a great range of environmental situations but seem to do best in river pools. Gravel, rock and firm sand bottoms are preferred. 'Eyes will also use sunken trees, standing timber, boulder shoals and reefs as cover or foraging sites. In the spring, the fish make a spawning run to shallow shoals, inshore areas or tributary rivers. At other times, they move up and down in response to the light intensity. They also move seasonally in response to water temperature and food availability. For the most part, walleyes seem to remain in loose but discrete schools.

Walleyes typically spawn when the water temperature is between 45 degrees F and 50 degrees F. AT this time, they will begin to move into the shallows, spawning at night in feeder rivers over areas of stone rubble or gravel. Now both males and females are together. That might be the good news, but the bad news is they have little else besides spawning on their minds. Walleyes don't feed much during the spawning period itself but right before or after it are excellent times to fish.

Also, bear in mind that all fish do not spawn at the exact same time, so you will likely have a few pre-spawners and post-spawners around at any given time. So to simplify, normally spawning runs start shortly after the ice begins to break apart, and spawning itself occurs late in march or into April, depending on water temperature. As mentioned, the males move to the spawning grounds first, and these fish will make up a majority of the fish that will be caught. Keeping eater fish, which are fish between 15- to 18-inches won't harm a system, but the larger males and especially spawn laden females should be returned back into the water. Areas to concentrate on are deeper water off of wing dams, pools below dams, drop-offs, bridge buttresses, eddy currents, inflowing creeks and islands.

Avoid soft, mucky bottoms they seldom support walleye foods. If the anchor shows traces of mud, it would be a good idea to move to another spot. Fisherman who pays attention to detail can also determine the bottom composition by the width of the band designating the bottom on their Liquid Crystal Display Unit. This year I used the AquaView Scout camera, a recent addition to the AquaView family. This is an inexpensive setup with unbelievable clarity. Typically underwater viewing in a river system is difficult but with the Scout in the infrared mode I was able to see the schools of fish unlike before. 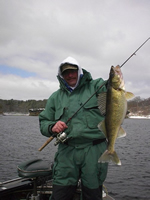 Walleye fishing peaks when food is least abundant. The food supply becomes the lowest in the spring when most of the previous year's baitfish has already been eaten and a new crop has yet to be produced. Daytime is the best for fishing walleyes in the river systems where murky water screens out the sunlight. This is also the time to dig out your big headed "current cutter" jigs in bright colors to help walleyes locate your bait when targeting river channels where the current is stronger. Lindy and Wolf river rigs tipped with a plain hook or a jig are also productive.

Lead-head jigs are most effective in rivers where visibility is poor. Jigs are the most beneficial because they can be worked close to the bottom. When fishing cut banks or rock piles, where the current isn't as strong, use the smallest jig you can to reach the bottom. A larger walleye will inhale the jig and if it feels anything abnormal will spit it out. Smaller fish nibble making jig selection not as critical. If the fish are biting lite, the addition of a "stinger hook" can help but these types of fish tend to run small and the added hardware could discourage a larger fish. Recently, some tackle manufacturers have come out with colored hooks on their jigs. Jeff Beckwith of Scenic View Tackle sent me a variety of this years jigs with colored hooks. The hook colors are green, red, and blue. On a recent outing I compared plain hook jigs to the colored variety under similar conditions. The red followed by the blue hook significantly produced more fish than the plain hook.

Minnows are the bait of choice for early season fish, but rubber tails can produce. Stay with the tried and true method of dark jigs on dark days and light jigs on light days. Many may dispute this, but I have had a lot of fish dinners following this principle. I prefer using a light action six-foot rod with six-pound test. This seems heavy, but snags are the word of the day when jigging.

Lower the jig slowly, keeping the line taut. You may get a hit on the way down. Every 15 seconds or so, raise the jig up about a foot and drop it back down until it hits the bottom. The fish may see the jig or the cloud it produces when making contact with the bottom. Most times you will get the subtle hit--wait. Let the fish hit it a couple of times, then nail it.

Another jigging system that can be used to locate difficult-to-find fish is drifting. The trick here is to head up-river of a long, likely stretch. Face up-river and let your boat go sideways in the current so that both anglers can drift fish. Let out just enough line so that your jig bounces on the bottom with your line angle no more than 45 degrees. The first time you try this method you will worry that your bait is too close to the boat and the fish may be spooked by the passing craft, but with the motor off that isn't the case, even in fairly shallow water.

You will begin to expect the fairly monotonous cadence of your jig bouncing on the rocks and gravel. If anything interrupts that cadence, whether it is the feeling of being temporarily snagged, a sudden weightlessness or loss of contact with the bottom or even a sudden "dead" feeling set the hook. Once you get the hang of this method, it is a prime way to locate new schools of walleyes.

When using the rig (Lindy or Wolf River), a medium action rod will perform better with eight-pound test line. HT Enterprises has a great medium action rod with a sensitive tip that registers the light bite often associated with spring walleyes. Lindy rigs or Wolf River rigs are both available at most bait shops. The most common method for using them is to anchor your boat and cast downstream. Tip both with a minnow or even two and watch the rod tip for a twitch. If these methods don't produce, cut the hook off a Lindy rig and tie on a floating jig tipped with a minnow. This added buoyancy tends to keep the minnow moving back and forth in the current, making it easier for walleyes to spot and prey upon.

One word on safety. Be careful when using anchors around dams. With all of the rip-rap , debris and trees associated with dams, there is a good chance that once you anchor, the anchor stays. I have been using a Richter anchor for the last two years and can honestly say I still have the same anchor. When fishing the Wisconsin River by the Dells Dam with another boat, I picked a spot, anchored and started fishing. My buddies, not to be out done, chose a spot next to me. When it was time to leave, I pulled up my anchor and they didn't. The rest of the day I had to anchor both of us!

Be flexible in the spring, don't stay with the same color, presentation or area too long. Keep trying new and different things until you find what the fish are after. Keep a large variety and color of jigs on hand. The rock monsters will take their share of these too, but when you set the hook and feel the unmistakable head shake of a big walleye at the end of your six-pound line, you will smile to yourself knowing that another successful fishing season is underway.

Steve Sams
Steve Sams is an outdoor writer and licensed fishing guide who specializes in walleye, musky and deer hunting.
TRENDING DISCUSSIONS
Advertise here
Advertise here
Please take a moment to visit our sponsors. Without them we would not be here.