It's that time of year when an anglers thoughts turn to open water. Although there is still lots of ice-fishing to do, it is only natural to look two months ahead to the time when we will be putting the boat in the water instead of pulling a portable shelter across the ice. Following are some of the things I'm looking forward to on that first open water trip of the year.

First, it will be nice to not have to wear heavy boots and several layers of clothing to go fishing. Oh sure, we'll have to dress warm on the first trip of the year, but it won't be ice-fishing boots and coats to protect from the cold and wind chills. Today's angler and outdoors-person is able to tailor clothing needs to the elements very effectively. Stop by a Cabela's store sometime and you will be amazed at how much clothing is available to enjoy the outdoors. You can find under and outer garments that are perfect for any type of outdoor activity. 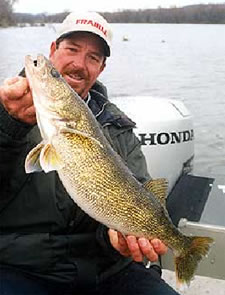 The first fishing trip of the year will probably be for walleyes, and jigs will more-than-likely be the lure of choice, probably a Fire-Ball jig. There is just something about a walleye taking a jig that says early season fishing. Jigs are great fish-catchers year 'round, but are especially effective early and late in the year. You can't describe the feel of a walleye taking a jig, but after you've experienced it a few times, the feeling is unmistakable.

I'm looking forward to trying my new color sonar unit. For the past several years I have been using Humminbird Matrix units and have been very happy with the features, quality of display, and ease of operation of these units. This year the Matrix 97 was added to the line, it has an amazing display and includes GPS. If it performs as well as the other Matrix units, it will be a winner.

It would be good if we could get some more water in many of the smaller rivers throughout the Midwest. Many of the smaller rivers are very low, and that has an extremely negative effect on fish populations. It will concentrate them in the deeper holes, but we need them spread out throughout the entire river. Too many fish in one area creates serious over-harvest opportunities.

I doubt that smaller rivers will ever again be as productive as they once were. Erosion and other manmade challenges have turned so many once healthy rivers into sterile streams.