By Brian Athern - October 1, 2000
"I'll circle past the swirl, and anchor so you guys can pinpoint the spot with a few quarter casts ahead of that fish." That was the strategy set forth by our guide and Kankakee River veteran, Matt Mullady. "Pop it and let it sit a few seconds, and pop it a couple more times" finished Matt's instuctions.

After three unsuccessful passes, Pat's Chug Bug struck pay dirt. The water erupted from below as a 19 inch smallie. Five minutes worth of tug ‘o 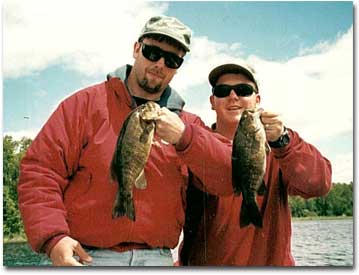 war ended when Matt slipped the net under her belly. "That's a Kankakee River bronze warrior sow !" exclaimed the 20 year plus river guru. Two snap shots later, the fish darted back to the structure of midstream boulders located in 36 inches of water.

As Fall fishing kicks into high gear, Kankakee River fishing enthusiasts begin to sharpen hooks on their favorite top water plugs. Some of the most heart stopping action occurs as Summer gives way to Autumn across the land. This is the season of take no prisoners, tell no tales, and pounding some serious water in search of the prized bronzeback.

The keys to success during this time of year are watching for shad boils and the subsurface assaults on those baitfish indicated by the swirls below. Boat control is key, taking care not to spook feeding smallies. Maintain a distance of 25 - 30 feet between yourself and the boat. Waders have the upper hand, though. Creeping up on fish is more easily accomplished with a sure foot rather than aluminum. Once in position, casting upstream from targets 20 feet or so(quarter casting) allows for pinpoint presentations.

Wood Choppers, Pop R's, Chug Bugs, Skitter Pops, Devil's Horses, and Jitterbugs are excellent for surface commotion. Floating varieties of Original Rapalas, Rebel Minnows, Storm Thundersticks, and Mystic Minnows can boil the surface with a subtle approach depending upon the smallies mood. Another approach is to burn a 1 / 8 or 1 / 4 ounce buzzbait across a hot spot. If that doesn't receive any attention, often "burning" an in-line spinner in nickel or silver/white combos just below the surface will provoke a strike. Several bronzed warriors may be seen following a hooked fish attempting to steal his "meal" as you fight him. When one fish is caught, many others are usually waiting for more of the same.

Some age old icons of topwater bass fishing must be left at the launch in order to land a higher percentage of fish. "Forget that waiting stuff and counting one Mississippi, two, after the strike is seen as with largemouth fishing" Mullady explains. "If you hit the water with that philosophy, you'll only bring home frustration." Typically, smallmouth topwater fishing requires an immediate hookset involving a solid snap of the wrist. A blow up at the bait usually brings the fish in contact with the hooks, and the snap of the wrist begins the fight. This holds true on the Kankakee and other rivers.

Gear selection for this type of fishing should be medium/medium-heavy spinning combos of 6-7 foot choices. With the action turning on and off like a switch, down time must be eliminated. "This isn't the time to try out your new baitcaster, I tell clients", cautioned Matt. "A quality 6-6 1 / 2 foot medium spinning outfit spooled with 8-12# XT and a properly set drag will more than do the job" adds the river guru. For added insurance, superlines like Berkley's Fireline with its non-stretch qualities can aid one's efforts to land more smallies. Just remember to set the drag to slip and give line sooner than with mono to prevent tearing hooks from a fish's mouth.

As with most topwater fishing, keeping slack line to a minimum is critical to success. Even with Fireline, a good hookset is next to impossible with ten feet of extra line on the water. Checking and retying knots often is equally important, especially after a series of hook ups is made. " A great number of people don't realize that fishing topwater for smallies is a blood sport! When that fish knocks the tar out of the bait, its scraping the line, bumping cover, and hitting the hooks," finished Mullady.

Once the bait preference is determined by the fish, a good alternative may be rigging two rods and switching after a few bites. "I think that's where lines like Fireline outshine mono because you see tell tale signs of wear and tear. The line frays and you retie, no problem. With monos, it usually takes the loss of a quality fish and a five dollar plug!"

This type of fishing isn't for the faint of heart either. One client of the Kankakee, Illinois native's nearly lost his spinning combo to a hard charging 2 1 / 2 pounder. "The bass just freight trained his bait near the end of the drift. I think he took his eye off the plug for a couple of seconds to check his spool and then....POW!"

Just when do we start heading for the rivers? Watch for the trend of cool nights in the low 60's and mid-upper 50's to begin. "Since determining 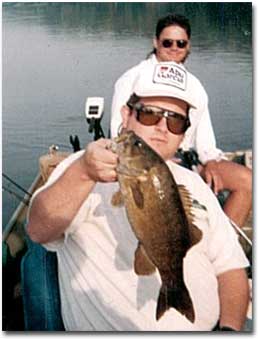 factors of where I fish are water level, clarity, and temperature, I can't help but follow the Weather Channel" offered the Kankakee, Illinois native. Matt has been known to call home via cellular phone and check with his wife on incoming frontal changes. When asked why the calls home he simply states "I don't do lightning!" The best action occurs when water temperatures hover in the 64 - 58 degree range, with overcast and low light conditions being considered ideal.

Temperature drops and seasonal shifts kick bronzed warriors into high gear. Bass will follow schools of baitfish, herd them, and then feed heavily, bulking up in anticipation of winter. This behavior, especially north of the Mason-Dixon line makes one of the most prolific fighting fish more available to anglers. Take advantage of the aggressive nature of smallmouth bass during this window of opportunity.

If you think you're prepared for bone jarring strikes and topwater explosions right before your own eyes, give Matt Mullady a call. He can be reached @ (815) 932-6507, with float and wade trips available for casters and flyrodders alike. Book early as his return client base is considerable. Matt can provide his 14 foot Jon boat, padded bass seats, and bait for up to 2 anglers.

For now, forget about the football games. Get out during the season when bronzebacks make their surge to bulk up before heading for deeper, wintering holes. This is the time to hunt those bragging sized fish, get your picture taken, and release them to fight elsewhere another day. Anyway, the real football season doesn't begin until late December!

Brian Athern
Brian J. Athern is a Field Editor with MidWest Outdoors Magazine, Fishing Facts Magazine and has also worked with the former www.thesuburbanangler.com. If you have any questions or comments regarding this article you can email Brian at [email protected]
TRENDING DISCUSSIONS
Advertise here
Advertise here
Please take a moment to visit our sponsors. Without them we would not be here.