Recently, I fished in a great Lakes Tributary (river) and we also fished in a near by harbor for Brown Trout and Steelhead. The day started off a little slow but after making a few subtle changes the action really heated up and really never slowed down for us the rest of the day. Sometimes moving a 100 feet or changing the type of bait presentations can make a world of a difference. 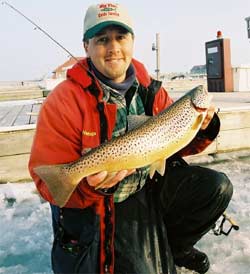 We probably landed 20-25 brown trout and a nice steelhead in a period of 6 hours. The average size of the trout were probably 6 lbs with the biggest being 12- 14 lbs. That was an exceptional day however, it's possible to consistently catch 4-8 fish each trip threw the ice. This bite will last for several months and the fish will still be there after the ice melts. Then the browns will move out into the Lake Michigan usually around May.

If you've never fished the harbors or rivers threw the ice I advise you to exercise more caution. Ice conditions change much quicker on the Great Lakes and on the rivers. Also, be sure there is plenty of ice and make sure you know where you're going; it's always good to bring a buddy with and several safety important safety items. If you have a cell phone place it in a zip lock storage bag in an easily accessible pocket. I always have ice picks, and an ice spud, I also carry a throw able life vest along with 100 feet rope. 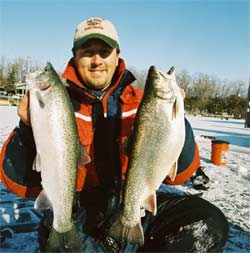 The area's that I primarily fish for browns and steelhead are from Sheboygan to Kenosha Harbor's if I'm looking for browns I will fish the harbors, Most of the brown trout spawn in the fall up in the rivers and winter is the time they begin to start feeding again. If I'm looking to target steelhead I will fish up in the rivers. The major difference between river fish and harbor fish is that fish in the rivers are holding over in winter pools, where as harbor fish are swimming around looking for an easy meal. For steelhead I will fish the same wintering holes where I caught them that fall. Sometimes you have to drill a hole on top of these fish to get them to bite in the rivers but once you find them you can do extremely well. Catching a steelhead threw the ice is the one of most exciting battles you will ever experience. The browns also put up a fantastic battle and every year I here of a 20+ lb trout be hauled threw the ice.

Just like any other type of fishing it's important to be versatile. I will bring minnow's, spawn sacs, skein, jigging spoons, tube jigs, wax worms, hair jigs, and whatever else I can use to coax these fish into biting. Your standard walleye type baits, rods, tip ups etc. will work just fine for these fish. I use 8 or 10 lb mono leaders on tip ups with number 10 or 12 size treble hooks or # 6 or 8 single hooks. You can also use a 4-5 foot medium action pan fish rod with a slip bobber and spawn sac or a shiner. Make sure you have a secure rod holder for your rod, and never let them sit on the ice; I've seen a few rods fly right into the hole, only 10 feet away from an angler. 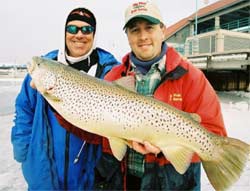 There are several mistakes I always see other anglers make while fishing for trout. "Horsing a fish" Just remember not to horse these fish in, they can scream off a lot of line in a very short period of time. This usually happens when the fish in near the hole. Take the time needed to land the fish and if you plan on keeping the fish make sure you bring a gaff. If you're planning on releasing the fish never attempt to gaff the fish. Another common mistake I see is when an angler gets a flag they let the trout "take it". Trout are very finicky and they will hit and drop live bait very quickly so it's important to get to your flag as quick as possible and if the spindle is spinning I set the hook immediately.

On a side note the great thing about fishing the great lakes harbors and river's is you have a legitimate shot at landing a giant pike, every year I know there are pike in the 20 lb class landed here threw out South Eastern WI. Dead smelt, big sucker's and golden shiners work well for pike rigged on quick strike rigs on a tip up.

It looks like this year could be a banner year for both numbers of trout and big fish. If you decide to fish for these trout make sure you have a Great Lakes Trout Stamp.

Best of Luck and be safe.