Throughout the Midwest, panfish are abundant and they're popular. Anglers year ‘round like to catch panfish, and the winter season provides lots of opportunities to do so. Lakes, ponds, backwaters of rivers, they all hold panfish in good numbers. Here are some ideas as to how you can catch more panfish through the ice.

First, it is important to identify what type of panfish you will be after. Different types of panfish call for different presentations. 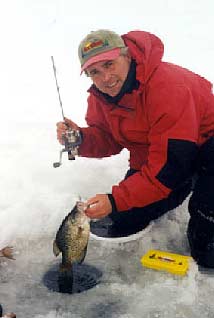 You need to determine what type of panfish is most abundant in the body of water being fished. A quick stop at the baitshop or a conversation with other anglers can help out here.

Now consider the fish itself. If you are going to be chasing bluegills or sunfish, you will want to use a smaller bait than if crappies are the quarry. Bluegills and sunfish have a much smaller mouth than do crappies. There are times when ‘gills or sunfish will take a crappie-sized bait, but put the odds in your favor and go with a smaller bait. A tiny Bro-Bug or Micro Minnow tipped with one of the smaller Gulp! maggots can be a bluegill killer, while crappies will go for the same baits in a larger size.

Crappies are often best caught during low-light conditions, while other panfish can be caught at mid-day. There are exceptions to this, but if you want to catch crappies, you're usually going to find more success later in the afternoon.

Lure placement is another critical consideration. It can be amazing how sensitive panfish can be sometimes to where the lure is in relation to where the fish is. Moving a bait up or down just a few inches will turn lookers into biters. This is where a sensitive sonar will pay off big. If you see a fish near your bait on the sonar, but it won't bite, try moving the bait up or down slowly. I usually like to move it closer to the fish, but however you move it, do so slowly, at least to start. The MarCum LX-3 enables you to view the entire water column or just a small window of it, which allows for a much better picture of what is going on around your bait.

As the ice-fishing season progresses, don't spend too much time on one hole. If you see fish on the sonar, fish them. If there are no fish keep moving. I like to fish from a Frabill Ranger Solo unit. This unit is black and prevents light from entering when it is closed, so you can see much better into the water. In clear water, you can see fish sometimes as they look at your bait, and this can help with the catching part of the deal.

Panfish are abundant and can be easy to catch at times through the ice. Keep enough for a meal and put the rest back. Just like any fish specie, panfish numbers can be fished down, and once you discover how much fun panfish can be, you will want to make sure their numbers aren't depleted.