By Bob Jensen - December 1, 2004
Just as there are a lot of ways to catch fish in the open water season, there are numerous ways to catch them through the ice. In open water or through the ice, many anglers like to get as many lines in the water as permitted, as this increases the chances for getting bit. In open water, many anglers will put a bobber rod or dead rod out while they throw a jig or crankbait from an anchored position.

Putting a tip-up out while jigging through the ice is kind of like putting a bobber rod out in open water. The only 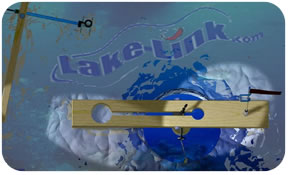 difference is, instead of waiting for the bobber to go down, you're waiting for the flag to go up. Employing a tip-up is both effective and fun. Here's how you can take advantage of tip-up fishing.

Let's say you're fishing a rock structure. As with any fishing, you never know where the fish are for sure. It works well to pop several holes at different locations around the structure. Set a tip-up at the first hole you drill, then try the others holes with a jigging spoon or other type of presentation. By doing so, you're covering more area and increasing your chances for getting bit.

By employing this technique, you're also giving the fish a couple of different presentations to look at. Anglers usually have a very simple rigging below the tip-up. A split-shot/hook with a minnow is how a tip-up is frequently rigged. The minnow is hooked lightly behind the dorsal fin and allowed to swim around close to the bottom. Simple but effective. 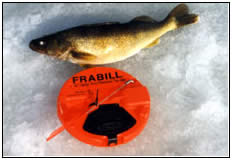 There are lots of different types of tip-ups. One that is favored by many ice-anglers is the Pro-Thermal Tip-Up. This tip-up is round and fits right over the hole. This prevents snow from blowing into the hole, and also insulates the hole, which prevents the hole from freezing over.

Another advantage to a tip-up of this style is that it prevents light from entering the hole. In deep water this might not matter much, but in shallow water many anglers think that a beam of light coming down the hole could spook the fish.

Different anglers have different ways of doing things. Some like their ice-fishing to be an aggressive style of fishing, others like it to be more relaxed. If you want to put out some lines and sit and wait for action, tip-ups are for you.

If you want to keep moving and working different holes, it's still a good idea to have a tip-up down a hole or two. Add tip-ups to your ice-fishing arsenal and watch your catches increase.