Fishing with one of America's Finest!

It's 12:10pm, Thanksgiving Day, and in the hustle and bustle of the smell of Turkey cooking, football on the television, and the union of family, friends and loved ones, I found myself, as I'm sure millions of others, drifting off in thought. As the sounds of the game, the conversations, and the aroma faded away I couldn't help but wonder, "What are our troops doing right now?" I kissed my wife on the cheek, asked what time we would be eating, and assured her I would be back in time to offer a blessing before we ate. 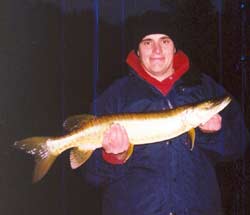 As I sat down at the computer I paused and thought of what Thanksgiving Day must be like for the families here at home who have a loved one on the other side of the world. It didn't take long to begin thinking about the families who will spend the rest of their days remembering a loved one who already returned and will not sit at the table today. I then drifted back to my original though, "What are our troops doing right now?" and began to remember a very special day I had on the water this fall.

As I walked into my favorite local bait and tackle shop back on November 13th a few weeks ago, I walked past the gentleman standing at the front counter and made my automatic B-line to the musky lures to see if there was anything new that I didn't have in my collection yet. I was there to meet a husband and wife who came all the way from Ohio for their first musky experience. While looking at lures the gentleman I had walked past approached me, held out his hand, and introduced himself, "Hello Sir, I'm Marvin Willey". I thought to myself "Sir", I haven't heard that word used in almost 20 years, when I was in the military. Finally, I got to meet the man behind the polite e-mails and phone calls over the weeks leading up to our scheduled musky hunt. We grabbed a few suckers, loaded their gear into the boat, and made our way to the boat landing. It wasn't long before we had a few suckers in the water and Marvin and his wife Noelle were casting some baits…we were now officially musky hunting! Since I always run the boat from the middle while customers cast from the front and back decks, I am always looking back and forth, from front to back, watching the sucker rods, and keeping an eye on all operations while the net sits located right in front of me waiting for it's moment. I noticed the BDU jacket that Noelle was wearing had the name Willey on it and asked Marvin what branch he was in. As with all of his questions and answers through out the day Marvin looked me directly in the eye and answered, "Army". When I asked where he had been stationed Marvin answered in modest and direct terms "I just returned from a 15 month tour in Iraq". I just stood there for a moment in silence and humility which at that very moment was broken as our boat side sucker began to swim in radical manner from side to side, coming to the surface and darting back down deep, someone asked "what's going on" when a high 30" class musky came out of nowhere taking several swipes at the sucker but missing it each time. Just when we thought it was gone Marvin encountered his first sense of what it feels like when a musky hits a Bulldawg. Unfortunately there was no connection, but the energy level was running high now. Only seconds later our sucker back behind the boat under the bobber now began to make the line clicker on the rod sing that beautiful song, zit…ziitt…zit, zit,…zzzziiiiitttt. WHAM! Marvin now had his hands on his first musky and the fight was on. It was her, the one who just missed the boat side sucker, and had the narrow escape with the Bulldawg, now it was just Marvin and his first musky, one on one, easily a 38" fish, just a few more feet. NO! Marvin had now joined my club, the same one many of us belong to, "the early water release without a picture club". No problem, we hadn't been on the water more than 45 minutes at this point and had a lot of fishing left ahead of us. Nonetheless, Marvin assured me that was the biggest fish he had ever seen on the end of his line and that he already was happy with that.

While the next hours that passed we not exactly fast and furious in regard to fish activity, I couldn't help but return to that feeling of humility as I stood between one of "America's Finest" and the beautiful woman who waited faithfully for him to return. The pride and joy I saw on the new bride as she glanced periodically, almost as though she was making sure it was real and not just a dream, matched the pride and joy I saw from a young man who served his country, and was grateful to be back home with the woman he loves. Marvin had just returned only a few months prior to our trip from Iraq where two extensions turned his 6 month tour into a 15 month tour. In addition Marvin and Noelle had to cancel and reschedule their wedding that had been planned for earlier this year. "What are our troops doing right now" continued to return to my thoughts as I wrote this and I began to hope that somewhere in their day, miles away, that they could have at least a moment to think about the one's back here who are thinking about them, the one's who love them, and the one's who support them in thought, prayer, and memory. Hopefully they have a moment to remember the last time they were on the water, in the woods, or just sitting around with family. I keep seeing an image of that beautiful woman on the front deck of the boat, and the millions like her who live day to day praying and waiting for the one's they love to return home safely. I think of the millions here at home who like many of us, always leave a spot in the boat, truck, blind, or deer stand for the one's who have fallen. 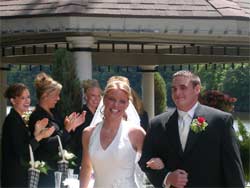 As time began to run out Marvin, Noelle, and I returned to the spot we had our best action earlier in the day for one last chance. I was beginning to feel a little anxious deep down inside, even though we had a great musky encounter I still wanted to see Marvin tangle with one. Still running 2 sucker rods, we now were casting 2 Bulldawgs as well. Practically in the same area as our earlier musky encounter we had two different hits on the Bulldawgs but still didn't connect. Finally on what was literally the "last cast" it happened, Marvin would get his first musky to the boat and in the net. A beautiful young 34" musky, a few quick photos, a good release, and a few slimy high fives, it was time to pack our gear up and head back to the boat landing.

"What are our troops doing today?" I'm sure there is one man and his wife enjoying this very special Thanksgiving together. Marvin, Thank You, Welcome home, and congratulations to you and Noelle on your recent marriage. For the rest of America's Finest we are thinking about you today, and pray for your safe return as well. On behalf of everyone here at Sterling Guide Service, we wish everyone a safe, healthy, and blessed Holiday Season this year, especially to the men and women of America's Finest.