By Robert Piorkowski - October 1, 2000
There is a small pond near my neighborhood where I frequently fish. The 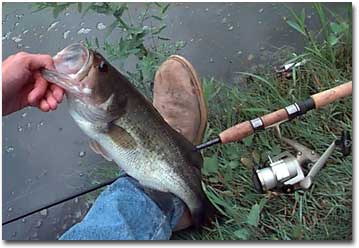 Pond is pretty small, its size is less than 5 acres. I'm close enough that I am able to walk over and be fishing in about 5 minutes. Plenty of neighbors have asked me my destination as I walked by with rods on my shoulder. They are usually surprised to hear that anything lives in the pond, let alone bass.

Early in the year, I was throwing everything at the fish with only minimal results. Crankbaits, Chug-bugs and plastics weren't catching the fish. It was by accident that I tried a mini-chug bug. I had snagged a semi-productive lure on the bottom, and I wanted to stay with a dark green color. I had a Mini Chug-bug in a frog pattern, so I tied it on and started casting. What a difference, fish were hitting the downsized lure where earlier I had caught nothing. I had definitely learned a lesson, downsize to produce more action in tough conditions. Using this technique, I have caught fish on other lakes and rivers.

One of my favorite fishing times was the one-hour before dark. This is when I'd tie on a surface popper, and flyfish the shallows for bass and bluegills. My flyrod for this fishing is a 4 weight, 7 ½ foot Sage, the lighter rod weight really adds to the excitement. After a while, I knew all the hiding places for bass, and the retrieve they preferred at my local ponds. My most productive popping bug's are made by Accardo Tackle Company.

My favorite popper is the "Miss Prissy". These come in white/black or chartreuse/black, and both have rubber legs. There are many types of poppers on the market, but I haven't had the same success with the leg-less models. In the spring, I stock up on different colors and models to ensure I wouldn't run out while fishing. Through the year, I have always had one on hand, despite losing more than half. Early in the year, a fast erratic retrieve drove the fish nuts. An abrupt stop to the retrieve, then slight of the popper would almost always hook a fish. Towards the end of the summer, the trusty popper wasn't producing as many fish. To produce more action, I then tied on a dark green or black woolly bugger to the hook shank of the popper. By using different lengths, I determined that a 2-foot dropper was easier to cast, and produced the most fish. The fish were still there; they just needed a little extra action. Bass and bluegills still hit the popper, but only bluegills chased the dropper fly. In the area I was fishing, the 2-foot dropper worked because the bottom depth was less than 5 feet.

During the summer months, I left a rod in my car with a lure attached to the line. I know about the safety concerns, but it does save the fishing time.

With a buzz bait, there is only one hook to protect. I was always ready to fish. I'd pop the trunk, grab the rod, and start throwing my chartreuse buzz bait. Usually within minutes, I was fighting a bass. I went through several colors before I discovered that chartreuse was the killer color. For maximum fishing percentage, a chartreuse buzz bait slowly pulled parallel to weeds would find the fish. By mid-summer, I was almost a master at varying retrieves and enticing strikes from hiding bass.

It was in early October when I noticed a particular event at my local pond. I stopped at the pond after work for a few casts. What I saw was amazing. Boils were appearing on the pond surface with a rush of fish activity. I had stumbled onto a feeding that I had previously only read about. Bass were herding the baitfish and gorging themselves on the little guys.

I saw some surface activity while I was throwing a Rebel Pop-R, but I only received several weak strikes. It seemed my lure was only an invader, and the bass were pushing it away from their dinner table. I couldn't understand, this lure was very productive all summer. As calm as I could, I ran back to my car and tore open my tackle box until I found a specific lure. Buried in the box was my secret lure, waiting for this moment. The chosen lure was a chrome colored Storm Chug-Bug, 3/8 ounce. I tied on the chrome bass magnet and headed back to the pond. I made several casts, retrieving fast and erratic but no fish. At different areas of the pond, I could see the surface erupting, but I was not part of the action. On my next cast, I retrieved the chug-bug as fast and as wild as possible. I made the lure dart and practically fly out of the water. Bingo, I had found the

feeding pattern. In the next half-hour I caught 6 bass, and lost several others. At times the crazy wild retrieve would cause the bass to boil up and attack anything swimming. (It reminded me of a cable TV documentary on pirhana's in the jungle.) This was fishing at its finest. Action on every cast!!

There have been many times when I stop for five minutes of fishing at the pond after work. I'm always hoping for another feeding frenzy. It's hard to compare days out against that one wild day. Most days, If I get one bass or even a strike, I consider it a good way to end the workday. I also have to admit stopping at the pond on the way to pick up a pizza or video for the evening. There were plenty of times when I would catch a bass, within a few minutes, and be on my way to complete the errand.

I've learned a lot from my local pond. The pond gives the availability to try new techniques and see quick results. Look around your area, there probably is a pond within minutes of your home. As I write this article, I have a baitcasting and a flyrod in the trunk, ready for fishing. I know as warm weather approaches, I'll be thinking of the feeding frenzy and the chrome chug-bug in anticipation for the upcoming fishing season.