By Steve Ryan - November 1, 2004
Ever cast a seven-inch lure into the night, hoping to hook a monster? Ever have the hair on the back of your neck stand straight up as an unseen fish throws water behind the lure? With each crank of the handle, the sound of erupting water intensifies.

Ever have to repeat over and over in your head - don't slow down the retrieve; don't set the hook; don't slow down; don't set? As the weight of the fish settles on the lure, ever set the hook into a fish that feels more like a compact car stuck in fifth gear than a fish in the bass family? Ever doubt if one hundred pound test microfilament line will be sufficient, while being dragged across the deck of the boat by a fish of enormous proportions? Ever question your sanity while fishing trophy stripers after dark?

Each fall, as water temperatures reach into the mid-fifties, stripers corral thread fin and gizzard shad on the surface. When stripers take to feeding, they do so in grand fashion. Working in packs, from as few as three or four fish to as many as thirty or forty fish, stripers herd, slash through and devour bait with amazing efficiency. Under low light conditions, stripers feed heavily on unsuspecting prey near the surface. It is at this time that stripers become susceptible to topwater lures.

With the aid of a typographic map, key locations to set-up for nighttime stripers are fairly easy. In lakes and open reservoir settings, concentrate on long points, sunken islands and riprap areas that hold bait throughout the daylight hours. When fishing rivers, focus on sand or gravel bars, wing dams and structure on the downstream side of islands that form current breaks. An artificial light source near any such structure increases the likelihood of an area attracting bait and stripers after dark.

On topwater plugs, stripers deliver a heart attack with every strike. Stripers, like other big game species, have the ability to mysteriously appear behind a lure at any given moment. However, appearances can be deceiving. Stripers have a few tricks to keep anglers guessing as they approach the lure. With an angler's heart racing to its limit and arm tensed to pull the trigger and set the hook, stripers often create a sizable wake as they swim past the lure and swat the lure with their tail. In doing so, stripers aim to cripple or kill the bait prior to coming back to eat it. Many an angler has fallen for the tail swap move and prematurely set the hook on a fish of a lifetime that was seconds away from coming back to swallow the lure.

Stripers also possess the ability to rush and roll on a lure with such ferocity that water, foam and spray erupts in a ten-foot radius around the lure. Enough to unnerve even the calmest of anglers. Unfortunately, flying water does not always equate to a hooked fish. However, sometimes out of the foam comes an irate fish with a mouth full of hooks. The excitement of hooking a trophy striper on a topwater plug quickly turns to pandemonium. A forty-pound striper is seldom stopped during its initial run. Even with heavy drag, a trophy striper can rip fifty or more yards of line off a reel before one realizes what snag the fish is running towards. If stopped, the fish can just as quickly reverse courses and run straight back toward the boat to wrap around an anchor line, outboard motor or trolling motor to gain its freedom. If one maintains control of the fish through these initial runs, stripers settle in for a few power runs to test one's line, knots, hooks and split rings. Ideally, the weakest link holds up to the pressure.

When all else fails, stripers show off their acrobatic side. If they cannot break something, stripers look to throw the lure by twisting, turning, rolling and even doing somersaults to get slack line and dislodge the lure. Once the fish is tired and at boat side, use an extra large landing net like Frabill's Power Catch Big Kahuna net. The Big Kahuna is a no nonsense net with a huge hoop and heavy gauge construction designed to handle record size stripers.

Lure selection for taking big stripers after dark has remained constant for thirty years. The prime three lures are Cotton Cordell's Red Fin, Creek Chub's Striper Strike and Heddon's Zara Spook. Each bait has its own unique triggering action. If water conditions are fairly calm, begin by working a Red Fin on a slow and steady retrieve. Fish the deep side of structure first, before moving to the shallowest areas. With its built-in wide wobbling action, Red Fins have likely taken more trophy stripers than any other topwater lure. If its subtle swimming action fails to produce any strikes, try ripping the lure like a jerk bait. This added commotion often awakens nighttime stripers.

At times, stripers will follow and pop at a Red Fin but refuse to take the lure. When this happens, switch to a lure like a Heddon Super Spook that can be worked almost in place with a walk-the-dog action. Cast the lure well beyond where fish have risen and anticipate where the fish are going. Start with a moderate retrieve and concentrate on working the lure in a deliberate side-to-side action. This becomes increasingly important under low light conditions so that stripers can pick-up on the location of the lure.

When winds create a chop on the water or when fishing current areas, a heavy-duty popper is necessary to throw up water and attract the attention of feeding stripers. At five inches in length and more than two ounces in weight, Creek Chub's Striper Strike (I1900P) and the new seven-inch Super Knuckle-Head are ideal for casting into the wind and raising big stripers after dark. To work big poppers aggressively, heavy line is essential. Microfilament lines like PowerPro are perfectly suited for this style of fishing. One hundred pound PowerPro has the diameter of 20-pound test ordinary monofilament, allowing nearly two hundred yards of line to be loaded on a large baitcast reel. 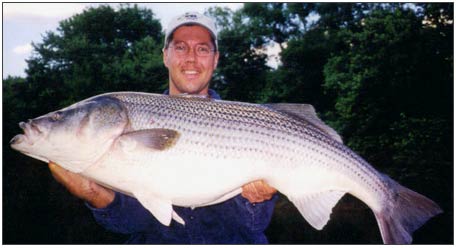 As with any topwater bait, when a striper appears behind the lure, speed up the retrieve slightly. Since weighted poppers like the Striper Strike sink when the retrieve is stopped, there is no excuse for stopping the lure when a fish appears. Through all the froth, foam and spray, keep reeling. Once the weight of the fish is felt on the lure, lower the rod slightly and set the hook with a long sweeping motion. To achieve positive hook sets, use a heavy casting rod of at least seven and a half foot in length. Select a high modulus graphite rod such as Lamiglas' LGM 76H Muskie series rod or XC 807 Big Bait Special rod which are light enough to cast heavy baits all night long and strong enough to withstand the power of a run away striper.

The thought of hooking a trophy striper in pure darkness can give anyone nightmares. However, with the right game plan and a wide selection of topwater lures, one can catch twilight stripers under any conditions. Set up on a prime location before the sun dips beyond the horizon; survey the terrain; steady your nerves; keep your focus, and don't be afraid of the dark.