Time To Re-Think Catch And Release 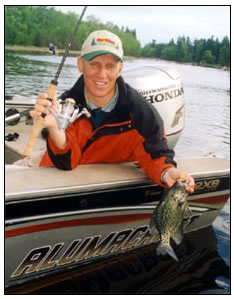 some sizes. The voluntary catch and release concept has been successful to a point, but it is time to re-think which fish are being caught and released.

First off, it is important to realize that there is nothing wrong with keeping a few fish. Fish are good to eat, and they are good for us according to people who know about health and diets and that sort of thing. The key is to keep the correct fish.

When the catch and release concept was in its infancy in the Midwest, proponents suggested keeping more panfish than walleyes, bass, pike, and other larger predator fish. The thought was that panfish were more abundant and tasted just as good as walleyes. For a few years that philosophy worked well.

However, after a few years it became apparent that panfish populations were being compromised by over-harvest. The numbers were still there, but the average size of these fish was much smaller. Many bodies of water that, just a few years ago had excellent populations of nice-sized panfish, are now pretty much void of panfish big enough to eat.

A few Midwest states and Canadian provinces are implementing progressive fishing regulations. Slot-limits are the most successful. Slot limits are simply a regulation to protect fish of certain sizes. For instance, some lakes require that walleyes between seventeen and twenty five inches be released. After having slot limits in place for several years, it has become obvious that the lakes with slot limits provide the best fishing action. The bodies of water that have more traditional regulations generally don't provide nearly as good fishing as those with slots. Minnesota appears to be the leader when it comes to progressive fishing regulations.

Fishing regulations are not a "one-size fits all" type of deal. Every lake is different and should be managed differently.

Some bodies of water have excellent yellow bass populations, and it doesn't do much good to release those guys when they get to eating size. It is healthy for the lake to take as many yellow bass as you will eat.

On the other hand, crappie populations can be beat up, especially on small lakes, very quickly. So can perch and bluegill populations. Keep enough for a meal and put the rest back. When everyone is keeping fifty nice-sized panfish, the population is going to be damaged quickly.

In many bodies of water, the fishing is better now than it was twenty years ago. With progressive regulations, we can make even more bodies of water better in the future than they are now.