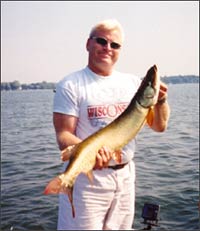 It's here! That special time of year all of us musky diehards look forward to…the beginning of fall. "What makes fall so great compared to the rest of the season?" my wife asks with a puzzled look on her face. Maybe it's the decrease of boat traffic, or the cooler temperatures, or maybe the decrease of fishing pressure while more folks start deer hunting, or maybe it's just because this is the time of the season all the muskies in the lakes we fish are going to be hitting maximum weight for the season!

Over the next three months I will outline the fall progression for muskies detailing location and presentation so hopefully you can get out there and get the big one.

LOCATION
September in SE Wisconsin is generally when water temperatures begin to gradually cool down and muskies that have been hanging down on the deeper breaks or suspended out over open start to return to structure. This means working closer again to outside weed edges and primary main lake structure such as under water fingers, points, and humps.

Before we get in to discussing presentation lets spend some time first taking a look at why these fish are here and what they're doing. Muskies just like every living have one primary need and that is to eat which is why they move around so much. Muskies like any other predator fish spend the majority of their life following bait fish around the lake from weeds to deep breaks to suspended out over open water.

Cooler water temperatures are an addition factor to include when understanding why muskies suspend over open water in the summer also. The shallower water they are returning to now often become to warm in the mid summer months and while muskies may move in and out of these areas briefly they are mainly out over cooler water.

Moving back onto these areas are mainly going to be the top location for a good 6 to 8 weeks from now through October while feeding will be a top priority from now until ice up. The two main reasons for the "big binge" are to store energy for the winter months when colder water temperatures will slow metabolism and to nourish the female's eggs which are starting to grow now.

These weed edges, points, humps, and fingers are going to serve as great ambush locations. 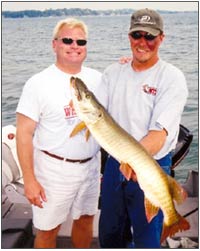 Here's the part I enjoy most about this time of the season. This is going to be a great time to key in on those outside weed edges burning bucktails and covering water. While there are other effective presentations like topwater and even jerkbaits, I like the bucktails because they cover water effectively and have a high percentage "hook up" rate. Burning a bucktail over a weed bed also produces a great level of vibration and the fast retrieve seems to have tremendous "triggering" abilities. This is one of my favorite presentations because you can cover a lot of water and seek out active fish. If you are getting only follows with this presentation then try different colors, sizes, and retrieve speeds first before switching to a different presentation completely.

Both fish pictured in this article were boated on the same day burning bucktails over weed beds last September, there were two other fish that got off that same day.

Good luck out there and check back next month where we will go into more detail on location and presentation for October.

Dennis Radloff
Dennis Radloff is the owner and operator of Sterling Guide Service which specializes in Walleye and Musky Fishing. Dennis has helped run and coordinate many of the Lake-Link.com Youth Tournaments. He is also a PMTT angler, Dave's Turf & Marine/Princecraft Pro Staff, and a Mepp's Field Staffer.
TRENDING DISCUSSIONS
Advertise here