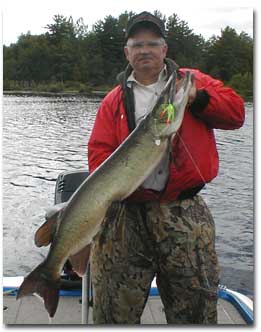 I HATE fall. I really do, there's sooo many things that I want to be doing, so many that I just can't get to them all. The really bad part about it is that some of them, I can't avoid (like storm windows and leaf raking). There's bow hunting for deer, grouse hunting, duck hunting, rifle hunting for deer, the walleyes are schooling up, the smallmouth bass are just begging to fight and worst of all, the muskies are taunting me. There's just not enough time to do it all and that's why I say…I HATE FALL!

For those of you that do have the time for all of the above, in addition to raking leaves, putting up the storm windows, getting everything ready for winter, I envy you. But if you're like me and have to limit yourself to just a couple, make sure that a fall muskie hunt or two is one of the choices.

Muskies are really putting on the feedbag now. They are responding to the shorter days and cooler water temps and are feeding heavily. If you are looking for the heaviest muskie of the year, this is the time to go. But there are some things that you'll have to take into consideration when fishing these toothy buggers.

Number One to remember is that a muskie's metabolism is tied directly to the water temperature. Cooler water means that they just can't (and won't) chase a fast moving lure. So, for all intents and purposes, leave the big bucktail collection at home. Bring a couple, just in case there is a freaky warm spell that brings the temps up, but don't plan on using them too much.

Number Two is that muskies are looking for maximum calories with minimum energy expense (kind of like a teenager). So, they want a mouthful when they feed. Fall muskie hunting means big

baits. Lure selection this time of year is anything that can be worked slowly. You want to use lures that represent an easy meal. This is the time for jerkbaits, crankbaits and soft plastics. This is also the time of year for suckers.

Number Three is, forget the shallow weeds. While muskies love to key on weeds most of the year, in the fall they will leave the weedbeds. Due to the decreased sunlight and cooling water temps, many of the weeds are dying off. As they do this, they start to decompose and in the course of decomposition, the process uses up a lot of the available dissolved oxygen in the area. This makes the muskies uncomfortable and they seek "greener" pastures. If you can find green weeds, GREAT, you've found a veritable muskie goldmine, but if they are brown and grungy looking, move on, Bud. Most times, shallow weeds just aren't where they're at. Often times though, you can find deep weeds on the edges of breaklines. These are excellent places to work a deep diving crankbait or weighted jerk bait. BIG soft plastics are at their best in these locations. Cast them out, let them fall into the weeds and then rip them loose. Muskies will either take them on the fall or they'll be eyeballing them as they hang in the weeds. That "rip" will trigger a reaction strike that'll have you setting the hook in your sleep for weeks.

Number Four, ROCK and ROLL!! Fall muskies relate to rocks and rock points. If the weeds are done for, I go to some of my favorite walleye spots. Rocky, windswept points will hold muskies. Deep diving cranks and weighted jerkbaits again. Get them down deep and work them as slow as you can, keeping contact with the bottom. As the bait bumps along, it will ricochet here and there, kicking up a mud trail. Hungry muskies will home in on this trail, looking for whatever is causing the commotion. Often, the strike won't be as hard as you'd think. This kind of fishing requires concentration. The strike can sometimes be as subtle as not feeling the lure vibrate. 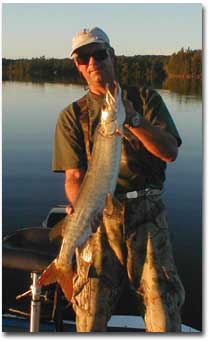 These sluggish fish will just cruise up behind the lure and take it in their mouth, continuing to swim forward. Anytime you feel something different, "SET THE HOOK". My favorite lures to fish these areas are crankbaits colored like suckers and walleyes.

Number Five. Some lakes just don't have lots of rocky areas. In this case, look for downed timber in the water and fish cribs. Muskies can and do use these areas for feeding. Used with caution, deep diving crankbaits can be fished through these areas with minimal snags. The large diving lip on the lure will deflect the lure from branches when fished slowly. If the lure does contact a branch, pause the retrieve and the lure will float up, going slightly backwards, freeing itself. If it doesn't, at $12 - $18 a lure, a lure retriever is a handy thing to have in the boat. When fishing wood, I'm a little slower to set the hook on a perceived strike. I wait to feel the movement of the fish before slamming the hooks home. It can be a frustrating way to fish but it can be VERY rewarding. Something that I've been doing this year also is Texas Rigging large Sluggos. The action on these lures is deadly, as they can be fished very slowly with lots of action and with the hook buried in the plastics, these lures come through even the thickest "crud" with ease. One thing to remember when fishing timber and cribs is to set the hook HARD!! You need some heavy-duty gear, heavy, no-stretch line and a MONGO hookset. You need to turn that fish's head and get it coming toward you with all the power you can to muscle that fish from cover. If you don't, all you'll have is an empty space in your tackle box and another story about the "One that got away."

Last but not least is LIVE MEAT! I know, to many muskie purists, suckers are evil, they're the work of the devil, they cause inflation, hard drive crashes, the heartbreak of psoriasis and they kill muskies. I agree, with single hook rigs, that can be the case. But, before you condemn me, hear me out. The quick strike rigs of today probably cause less injury and damage to fish than multi-hook jerkbaits. I don't have the space to go into all of the ins and outs of the various quick strike rigs out there but if you're going to hang a sucker over the side (and you should), it should be on a quick strike rig.

I fish one on a very short line on the side of my boat. When I'm drifting along, the sucker is probably only four feet from the boat. Many of my clients are amazed that I fish them this close and most don't believe me that a muskie will strike it. But time after time, unseen muskies have taken this sucker. We'll be fishing away and all of a sudden, the sucker reel clicker is screaming and the bobber is tearing away in a stream of bubbles. At this point, I'll immediately grab the rod and as soon as the fish is heading directly away from me, I'll engage the reel and BLAST it. You don't have to wait 30 minutes or longer anymore, as soon as you think that the muskie is in a good position to set the hook, "Go for it Big Guy." These muskies will be usually hooked in the edge of the mouth or missed entirely. Both are good for the muskies, only one is good for you. I probably have a 60 - 70% hookup rate using quick strike rigs and they are the only way for a responsible angler to fish suckers any longer. Like I said earlier, many of the muskies caught on these boatside rigs are fish that weren't seen, but many times, I've had a muskie follow a lure in and veer off to take the sucker. Sometimes, they just want meat. It's especially exciting to watch.

Recently, I had two clients out and the lake that we were fishing was fairly clear. As we drifted along, I noticed a nice muskie trailing the sucker. The suspense was only slightly less excruciating than a root canal as the muskie played "cat and mouse" with the sucker, making false strike after false strike until it finally came slashing in and grabbed the sucker. I let it go about 30 feet before setting the hook. When the fish was brought in, it was hooked securely in the upper beak and released in an explosion of fairly cold water. To say that it was in good shape is an understatement.

Does the sight of a "log with fins", a fish as long as your leg and even bigger around set your

heart a pumping? Do you like the idea of setting the hook and feeling like you are trying to stop a D-8 Caterpillar? If you want to catch a real wall hanger, this is THE TIME to be on the water. You probably won't see the numbers of fish that you will in the summer time, but I guarantee that they'll be a darn sight heavier.

If this article has gotten you a little pumped up for muskie fishing…GOOD! I mean, if you're really good, you can convince your wife that putting up storm windows is good aerobic exercise (better and less expensive than a health club). Those leaves will still be lying there, right where you left them when you left and besides, that's what neighbor kids are for, isn't it? Go Get Em' Tiger!!