By Bob Jensen - September 1, 2004
Muskies will eat a lure at any time of the year. Numerous huge muskies are caught annually in the spring, often by walleye anglers using small, walleye-sized baits. However, if you want to up your odds for tangling with one of these toothy freshwater tigers, the period from mid-summer into late autumn can be the best time to do so. Here are some ideas for increasing your chances to catch one of the battlers. As a former musky guide, many years ago, bucktails and jerkbaits made up a big part of our musky arsenal. Those baits are still a major part of most musky anglers bags-of-tricks. 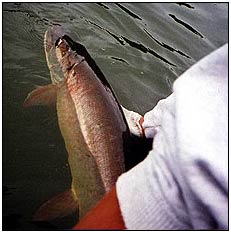 Casting and trolling presentations work well for muskies. Trolling enables an angler to cover a lot of water, all the while keeping the bait in the fish zone.

Casting big musky baits is a lot of work, but is also very exciting. You will be able to see fish follow your lure, and I guarantee, seeing a big, even a mid-sized musky just inches behind your bait is exciting.

There are other advantages to casting. First, when a fish follows your bait, even if it doesn't hit, it has revealed that it is living in that area. You should check back periodically to see if it is ready to eat.

Following fish also reveal what baits they are interested in. If you have been throwing jerkbaits and seeing nothing, and then switch to a bucktail and start seeing fish, you should probably spend more time throwing bucktails.

Musky anglers used to believe in rods that were like pool cues. However, most die-hard musky anglers are now using longer rods very effectively. The longer rods are more forgiving and versatile. The 6'6" and seven-foot rods that have become very popular throw baits farther and allow for larger figure eights. Berkley and Fenwick both make some of the best musky rods out there.

Line has changed a little bit too. Super-lines are now super popular for muskies. Gorilla-Tough line in the fifty-pound test allows for great hook-setting and casting. Spool the line onto a reel that will withstand lots of abuse. The Abu Garcia Ambassadeur reels are the standard for musky fishing.

Now the fun part. When chasing muskies, you just go fishing. I like to tie on a bucktail, the Bionic Bucktails, both the in-line and spinnerbait style, have accounted for many really big muskies in the past few years. Find a deep weedbed or a rockpile in a lake that you know has good populations of muskies, and starting throwing. Watch for fish to follow, be ready for a strike, and don't freak out when a fish explodes on your bait right at the boat. That's the fun part of musky fishing that will hook you for life.