By Bob Jensen - July 1, 2004
Catfish will bite year 'round, but lots of anglers wait until the heat of summer has set in before they start chasing whiskered fish. Here's how you can get in on some fast catfishing.

In the Midwest, catfish inhabit a variety of waters. They can be found in lakes, ponds, and big and small rivers. There are several varieties of catfish, but for the most part, anglers in the Midwest chase channel cats. 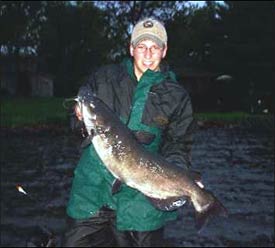 It is often thought that the stinkiest, grossest stuff you can find is good catfish bait, and that can be true. However, catfish will also readily feed on freshly killed minnows, and many walleye anglers frequently take cats on crankbaits or spinner harnesses. Catfish can be caught on a variety of baits, but most of the time, this time of year, a prepared dip-bait can be the most productive.

In rivers, look for catfish to hold in deeper holes that have some current going through them. The fish will hold here, just lounging around, but they will take a bait if they get the chance.

Much of the time, when the cats get ready to bite, they will move right into the current and let the natural flow of the water bring their food to them. This is when it works well to anchor or find a fishing position from shore just above a riffle. The catfish will move from the deep hole to the riffle and feed. If you're bait is there, chances are it will get eaten.

In lakes, catfish will be found in a variety of areas. Rush beds, sand flats, and rock islands can all be cat attractors. Frequently the wind-blown side of a structure will be most productive.

Catfish have the reputation of being nighttime feeders, but I have caught many, many catfish on bright sunshiny days. Although I would prefer to chase cats on darker days or at dawn or dusk, they certainly can be caught during the day.

In many areas catfish can be taken on light tackle, but in most spots for average size catfish ten or twelve pound test Trilene XT is a good choice. If you're on one of the rivers in the Midwest that has a reputation of turning out big cats, or if you're fishing near lots of cover, heavier tackle is called for. Much of the time though, you will get by fine with medium to medium heavy equipment.

Many cat anglers like to give the fish a variety of foods to look at and see if they show a preference on that day. Put some cut bait out there, but also give them a couple of types of dip-bait to choose from. Some anglers like chicken, turkey, or beef liver as well. And, of course, some very successful cat-chasers are convinced that nightcrawlers are the key to success.

There are a couple of items that you won't want to forget. Insect repellent is a must if you're going to be fishing from shore. Mosquitoes can chase almost anyone from a hot bite.

A Lip-Grip is another tool that can save fingers from a catfish's sandpapery lips. A Lip-Grip holds the catfish securely yet gently by the lower lip while you get the hook out.

Catfish are a great fish that can be caught regularly, perhaps more regularly than other species of fish, right now. Wherever you live in the Midwest, there are some waiting to be caught close to your home.