By Bob Jensen - June 1, 2004
When some anglers think of "three-ways for more walleyes", they might think "jigging, rigging, and crankbaiting" or something like that. And, although those are three good ways to catch walleyes, in this case we are talking about

Most swivels are used mostly to prevent line-twist and have only two tie points. A three-way swivel has three tie points, and it is this feature that makes three-way swivels so effective in some walleye situations.

Rig a three-way like this. Tie the line from the reel to one of the tie points on the three-way. On the other tie point directly below the tie point for the main line, tie a dropper line. This is the line your sinker will be attached to. On the remaining tie point, the line to your lure will be tied. This is called the leader.

There are a couple of different thoughts on line weight when using a three-way system. Many anglers like ten or twelve pound test Trilene XT on the line to the rod, and about the same on the line to the lure, especially if the water being fished is stained. The one real variable is the dropper line.

Some anglers like to use a dropper line that is lighter in weight than the leader, say about eight pound test. This way, if the sinker gets snagged, that line will break and the sinker is all that will be lost. Tie on another sinker and you're ready to go.

However, on a recent trip to the Mississippi River near Lake City, Minnesota I fished with river-rat Loren Waalkens. He has a different philosophy on the dropper line. He ties the dropper with twenty five-pound test Trilene XT. When he 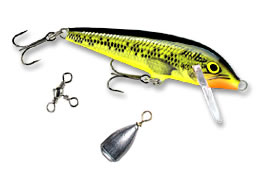 gets snagged, he just pulls the whole rig out of the snag. Instead of losing the sinker on light line, he loses nothing. In the past year, Loren says he has lost one sinker. That's a pretty good deal.

On the leader you can tie a plain hook, a Gum-Drop Floater, or a minnow-imitating bait. If the fish are a little finicky, the live bait set-up will be better. When you want to cover water, or when the fish are hungry, go with the minnow bait.

If you're going with the minnow bait, use a shallow diver. A deep diver will plow the bottom too much. On that recent trip to Lake Pepin, the smallest Frenzy Firestick minnow in shiner or lime/chartreuse/white out produced other baits three to one.

A five to seven foot leader will be about right for most situations, but don't hesitate to experiment with leader lengths.

For the dropper, fifteen to thirty inches will be right in many situations. Again, don't hesitate to experiment.

You will want to use a weight heavier than ordinary, as you will want to be trolling with the rig straight down as much as possible to prevent snagging.

Give three-way swivels a try this year. You'll find them to be top producers in many situations.