Chase The Other Fish

By Bob Jensen - May 1, 2004
Too many anglers consider themselves to be single-species anglers. Many, many times I've heard a person proclaim that they are a walleye-fisherman, or a bass-fisherman, or a cat-man, or whatever. If you enjoy specializing on one particular specie of fish that's fine, but you're missing out on a lot of other very good fishing opportunities. 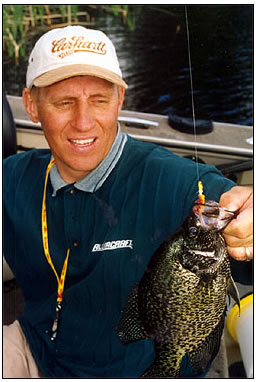 Anglers in some areas, or some areas of some states, miss out on some great fishing action if they limit themselves to one species of fish simply because of seasons. If you consider yourself to be a walleye angler and don't go fishing until walleye season opens, you're missing out on some excellent panfish and catfish action. Why not chase some crappies or catfish until the walleye season opens, then if you want to catch walleyes, go for it.

Once fishing season is open for the walleyes, there are going to be some days when the walleyes are going to be tough to come by. Those are the days you should get after northern pike or largemouth bass or panfish. Weather can be one of the factors that make walleyes hard to catch, but in many bodies of water, the pike won't be as affected by the weather.

If you live near a river, how about doing battle with some carp. They're abundant in many areas, they are generally willing to eat a gob of nightcrawlers or sweetcorn, and they fight exceptionally well. I guarantee you, it's more fun to catch a few carp than not catch any walleyes.

Sometimes it's fun to find a weedline, tie on a jig and piece of plastic and just start casting. On many bodies of water in the Midwest you'll catch walleyes, largemouth bass, pike, and panfish on this set-up along a weedline. If you decide this sounds like a good deal, the best jig/plastic combination in the minds of many is a Mimic Minnow head teamed with a four inch GULP! Turtle Back Worm.

Rivers are often the best place to look for fishing action, especially if you're not selective about what you catch. Rivers will produce action when lakes won't in many cases. There are a couple of ways that, from late April through mid October, you can almost always get a few fish to bite on a river. One is, again, a jig and piece of plastic. In rivers, try a Thumper Jig with a three-inch Power Grub or GULP! Minnow Grub. The Thumper Jig has a small spinner that seems to be especially attractive to river fish.

The other technique that will almost always work from spring through autumn is trolling a crankbait. If you're just looking for action, a smaller crankbait will be better. The new Frenzy Firestick medium diver is a good choice for a wide variety of fish.

It usually works best if, when you go fishing, you have a target specie. However, if that specie is playing hard to get, it is a good idea to adjust your technique and see if you can get something else to bite. Most folks, when they go fishing, just want to get something to pull back. If you keep the above ideas in mind, you will almost always achieve that goal.