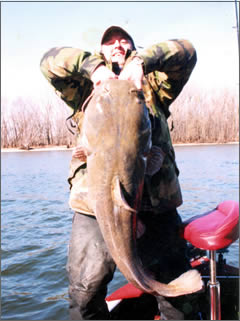 One of the best times to catch Channel Catfish is shortly after the ice leaves the lakes and rivers these fish inhabit. As the water begins to warm catfish will go in search of easy meals. Channel Catfish are great table fair and put up a sporty fight. However they remain by- passed by many anglers?? Each spring around this time I will take the time to fish for catfish, mainly just for the sport of it however there is nothing wrong with eating them. I love battling 10, 20 and even an occasional 30 lb catfish on my traditional steelhead, and bass rods. The action can be fast furious with both numbers of fish and big fish. If you've never experienced cat fishing I'd highly recommend giving these fish some time and attention.

Where To Go?
Most of the rivers here in Wisconsin hold catfish especially in the Middle or Southern portion of the state along with many lakes. The area's I usually will guide out of are: The Wolf River and Winnebago system is one of my favorites, the Fox River also holds many catfish along with the Wisconsin River, Rock River, Milwaukee River, and many others threw out the state. I've also had some of my best days when the sun shines with warm spring weather. These fish will at times be more active in spring in mid day and evening that they are at night. However I'm always prepared to spend an extra hour or two at night with a client if he or she chooses to fish at night.

What To Look For?
When fishing for catfish in early spring there are a few area's I will try. When fishing rivers I will look for both shallow flats and deep holes, depending on the river and the water temps. When the water is cooler, you can still find channel catfish schooled in certain area's in rivers. Generally they will be found in somewhat deeper holes and near rocks, current breaks, or transition areas. However they can also be located near wing dams, eddy's, islands, bridges, water 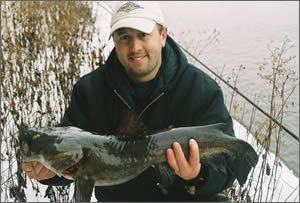 discharges, log jams, creeks or right up near the dam of a river. In lakes I like to look for several areas. The first area's I will search for is the area's that have been heavily pressured during the previous winter, especially in shallow flats. There are always dead minnows and dead pan fish in this area, and catfish will congregate here for easy meals. I will also look for rivers or channels with current that go threw lakes, such as old river bottoms or creek beds.

I usually do not spend more than 30 minutes in a spot unless I have some sort of catfish action. As a rule of thumb I always want to anchor up from where I'm trying to fish and allow my scent to carry in the direction of where I think these fish will be congregated.

What To Use For Bait
There are many types of catfish baits on the market, and many work well. I use many different baits, live bait such as night crawlers, cut bait, dead bait such as smelt or gizzard shad, live bluegills, rock bass (when caught from the same body of water fishing for cats), along with chicken gizzards, and stink bait, . Cut Bait is basically cut suckers or chubs I use when purchased from a bait shop. I will keep my chubs, Golden Shiners, or Suckers alive and cut them up right before using them. Remember Catfish have an incredible sense of smell and will come from a long distance for a meal. As the water warms Catfish will become more aggressive and another popular method to catch Catfish is to troll with crank baits and stick baits. Trolling is probably my favorite method because you will catch all sorts of other game fish. I generally will use the same lures/baits for walleyes as I do for catfish.

As for tackle there are many different types of rods and reels to use. I'm not going to try and tell you you'll need new rods and reels or a certain "name brand" just use what you have. Basically, I'd recommend something in medium action with about 10-12 lb test. You can drift fish for catfish in rivers using floats, jig them up with live bait, use a three way with dead bait, stink bait or cut bait or a two way swivel with live bait such as smaller suckers or chubs. Each lake or river may require a different technique or approach to catching these fish. Best of luck and remember to bring a camera for the big ones!

Eric Haataja
Eric Haataja is the owner and operator of Big Fish Guide Service. He is an accomplished tournament pro, world record line class holder, articulate seminar speaker, father of 2 and married.
BITS & BITES
Advertise here
Advertise here
Please take a moment to visit our sponsors. Without them we would not be here.