A Brief History of the Great Boarder War - Chap. 3.2

Each summer, a great naval battle is held as well. Both the Illinois American and Wisconsin American forces utilize watercraft that can be loosely categorized into one of five distinct categories:

First is the generic 20-year-old rowboat. Rowboats are generally occupied by an owner who is too poor to own a real boat. Occupants, embarrassed at their obvious display of poverty, pretend to be a well-equipped fishing vessel, and display a salty attitude towards all nearby watercraft including other rowboats. Rowboats are used as coastal patrol craft.

Next is the modern fishing boat. Modern fishing boats require a second mortgage to own, will easily outrun an '83 Dodge pickup, and possess enough electronic devices that locating the Titanic with one is mere child's play. 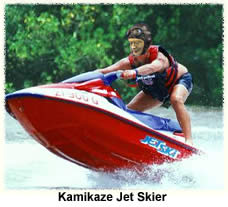 These are the battle cruisers.

The third group is the Jet Ski. Driven by daring young men of questionable ability to pass mandatory urine screening, the Jet Ski owes its development to Japanese Asians. Borrowing from the kamikaze heritage of WWII, and the fact that they lost, the Japanese Asians cheerfully supply Americans of every heritage with these human torpedoes.

Fourth is the water ski boat. No one has found a genuine use for the water ski boat other than to fill them up with college girls in bikinis and motor around the waters recklessly drinking beer. Their primary offensive weapons system consists of attempting to launch a "boogie board" occupant towards the enemy. This is done when a coed bikini clad weapons officer gives the signal to fire by offering to let the driver do a "belly shot." Properly timed, a water ski boat will easily take out a rowboat, and is the aircraft carrier of inland waterways.

Last is the pontoon boat, or "party barge." Slightly smaller than an ocean going tanker and only slightly faster than a rowboat, the pontoon boat can hold half a casino's worth of geriatrics, their combined offspring, and a relative horde of grandchildren and various and sundry other minors from the neighborhood. Supplied with kegs of beer, a bar capable of issuing forth several hundred old fashioned (brandy or whiskey, sweet or sour), eighteen cases of Mountain Dew, play floats, cribbage boards, an integral head and changing room, they are formidable. If stocked from a fireworks stand, be it French European American, Native American, or Korean Asian American, the party barge appearing on the horizon should be regarded with the same respect afforded a pirate ship. These are landing craft.

The typical course of a naval battle is difficult to recite for written dialogue. The rules of engagement are less clearly defined than the land battles of the fall. And the season is longer.

Jay C. Lorenz
Jay C. Lorenz was once a professional historian, with a thriving history shop in Tupelo, Mississippi. Unfortunately, the recession of 1981, coupled with a regrettable scandal over the correct spelling of Czechoslovakia, left Jay destitute and reduced to pursuing his other marketable talent; delivering Domino's Pizza in the greater Tupelo metropolitan area.
TRENDING DISCUSSIONS
Advertise here