By Bob Jensen - February 1, 2004
This is the time of year, in many areas of the Midwest, when fishing slows down for some folks. In fact, many anglers believe that the best ice-fishing of the year is under first ice and that the rest of the season just isn't very good. While it is true that early ice can be very productive, if you hang up the ice-rods and auger now, you're missing some great action, and much of the time that action will be provided by hungry perch looking for something to eat. Following are some ideas for putting a few perch on the ice right now. 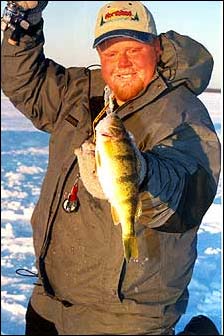 In the past few years I've been in on some really good perch bites with some of the best ice-anglers in the world. Every now and then even the best ice-anglers have differing views on how to go about catching perch through the ice in mid-winter. One excellent angler that I fish with likes to wait them out. He goes to an area that has been productive, drills a few holes, then moves back and forth in that small area waiting for the perch to show up. And almost always they do. He drills holes that are usually no more than twenty yards apart.

Another very successful angler that I fish with prefers to go looking for the perch. He will pop a couple of holes and give them five, maybe ten minutes, and if nothing happens, move a hundred yards away and pop a couple more holes. He prefers to keep on the move, and he is usually successful also.

The second angler relies heavily on mobility. He fishes from a lightweight Frabill Solo Ranger, and he also selects a StrikeMaster Lazer Mag auger, which is noted for being lightweight. If it's a hassle for an angler to move, they probably won't move as much as they need to if they are going to be looking for fish.

Both of my ice-fishing friends depend on a sonar unit to determine if there are perch in the area being fished. Both generally start out with a spoon tipped with some type of bait. The spoon typically takes the active fish. Buck-Shot Rattle Spoons in the eighth ounce size are very, very good, but go larger if the fish are aggressive and smaller if they don't want to bite.

If you see fish on the sonar and they don't respond to the spoon, go with something smaller with a more subtle action. We did great with Micro Minnows on finicky perch on a mid-winter trip last year. Tip the smaller bait with a small Gulp! Maggot and hold it motionless right at the level where the sonar says the fish are.

If they won't take the bait, move it a little higher, just a couple inches above where the fish are. If the fish come up and look at the bait but don't bite, a color change or a smaller bait might be in order.

There are some ideas for putting a few more perch on the ice right now. In fact, these ideas will also work on most panfish as well as walleyes. However, the only way you're going to find out how well they work is for you to get out there and try them yourself.