By Fishing The Wild Side - January 1, 2004
Written By Doug Newhoff

Fish have a brain about the size of a pea. They have a stomach that's roughly 20 times that large. Fortunately for those of us who love to fish through the ice, one feeds the other. 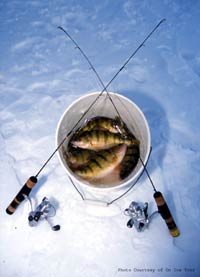 While a crappie or perch isn't capable of figuring out where to find a meal when the pickings get slim in the middle of a Midwestern winter, sustenance is survival, and instinct drives those fish to feed. In the aquatic world, that means reacting to visual, audio and olfactory (sense of smell) stimulation. Most anglers have brains about 1,000 times larger than fish, yet we aren't that much different when it comes to satisfying our appetites.

Being intelligent creatures, this is information we should be able to use to our advantage. If we can stimulate the fish we pursue, it follows that we should be able to catch them. What many anglers don't consider is that there are often multiple fish attempting to react to the same stimuli at the same time.

Our challenge isn't only to create the sight, sound and scent to create a feeding frenzy through our choice of lures and bait, it's also to keep the fish interested and to sustain that binge as long as possible.

Those who are successful often leave the ice after catching numerous fish. Those who don't take advantage of these opportunities don't know what they missed.

I remember an outing last winter on Rainy Lake with Woody, the legendary guide from Woody's Fairly Reliable Guide Service located in Ranier, Minn. It was a warm, sunny day, so our group of four anglers chose to fish without shelters. We quickly drilled about 40 holes (a task made incredibly easy with the use of a StrikeMaster Lazer Mag power auger) in a deep bay with a mud bottom that serves as a wintering area for crappies. Then we methodically worked our way from hole to hole using our sonar units to find the pods of fish that were roaming the bay. When a crappie would appear, we'd work it over with Lindy Techni-Glo Frostees and Genz Worms tipped with livebait. Woody's lure of choice was a Northland Buckshot Rattle Spoon.

Usually, by the time we enticed that initial fish to bite, several more were visible on the sonar, undoubtedly attracted by the commotion of the lure and movement of the initial crappie. However, they were often gone before we'd get the first crappie landed and unhooked and our lure re-baited.

To keep the feeding frenzy going, we switched from live bait to Berkley Gulp! grubs and maggots to eliminate the need to re-bait. On the advice from Woody, we also began working in pairs. When one angler found fish, another was never more than a few feet away. And when one of us pulled a crappie onto the ice, the other immediately dropped a lure into the same hole to the fish waiting below.

By targeting those frenzied pods of hungry fish rather than waiting for them to come to us, our catch rate increased dramatically.

We were able to take that approach because of the mild weather on that particular day. Most mid-winter outings in the upper Midwest aren't quite as inviting, but that doesn't mean we can't use the same approach to increase our catch.

When forced into a more stationary approach where we need the shelter of an ice tent to protect us from the elements, the trick is to draw the fish to us and then provide the stimuli to create a feeding frenzy.

I always try to avoid setting up my Otter shelter until I can find fish with my sonar unit. However, they have sometimes moved on by the time I'm ready to get after them. That's when I dig out an extra rod that I have rigged with a Berkley Frenzy Power Rattl'r. The Power Rattl'r was designed for open-water applications, but it works well for attracting fish under the ice because it's visible, it creates noise with the rattles and vibration it causes when jigged aggressively, and because the tail is constructed of Power Bait to add scent to the menu.

Walleyes, Northerns and panfish on the large side will often eat the bait, but because of it's size, I primarily use the Frenzy Power Rattl'r as an attractor, downsizing to smaller baits if the fish show up and just "eyeball" the Rattl'r. My other favorite lures for attracting fish are Lindy Rattl'r Spoons and Flyer jigs while fishing partner Chip Leer prefers Northland Airplane Jigs and Forage Minnow Spoons worked aggressively. A generous dollop of Power Attractant on these lures completes the effect.

A few wily old veteran anglers have been using the scent approach for years by wrapping a handful of waxworms, freshwater shrimp or minnows along with a couple of sinkers in nylon netting and lowering that to the bottom. Now, with the advent of scented baits like Gulp! and PowerBait, an angler can attract fish and catch them with the same offering.

I like to keep two rods ready to go with different lure profiles, and different baits - one with PowerBait and one with Gulp! This not only gives the fish two different "looks", but it also arms me with a second presentation to quickly offer the fish if the first one gets "fowled"! I'll also tip both presentations with live bait if it's convenient. If the fish pick off the live bait, I can almost always pick them back up and catch them with the Powerbait or Gulp!, whereas most anglers would sit "unbit" due to the lack of any bait at all on the hook. More often than not, I'll skip the live bait because the scented artificial bait is all it takes to keep them "on the feed".

Finally, it pays to draw the fish up in the water column as much as possible. I've found that time and again, if I can take a fish sitting tight to the bottom and pull it four to eight feet up, it will attract other fish in the immediate area. When these other fish watch one of their cousins eyeballing a lure a few feet off the bottom, they often inch their way into the picture beneath the action and remain there, becoming even more interested when you yank that first fish from the water above them.

That's when you can create a catching frenzy!

Fishing The Wild Side
Co-founded by Chip Leer and Tommy Skarlis, Fishing the WildSide is an extensive effort focused on generating excitement for the great sport of fishing. For more articles, fishing tips, info on the latest and greatest fishing gear or a schedule of Fishing the WildSide Pro Staff appearances, log onto www.fishingthewildside.com. For a free copy of the Fishing the WildSide Annual, call (218) 547-4714.
BITS & BITES
Advertise here
Advertise here
Please take a moment to visit our sponsors. Without them we would not be here.