Are you stuck for an idea for vacation next year? Are you tired of going to the same places, seeing the same things, putting up with the same crowds, year after year? Well, hey, sit back, grab a beverage and let me give you an idea.

First of all, if you have school age kids....Bummer! Or maybe your kids can miss a little school, if so, that's a good thing. Because the first thing I'm going to suggest is that you schedule your vacation for mid September. Whoa! What happened to June, July and August? Well, if you're into mob scenes, tired, cranky family members and burned out summer help, then go for these times. But I'm here to tell you that I went on a September trip that was one of the best vacation trips that I've ever been on.

I took a "little junket" up north of the border last September. I had the time of my life. You see, the place that I went to was Mousseau's Island Lodge, Sturgeon Lake, Ontario. This is a fantastic lake and the lodge is GREAT! I've been to many places and I've never felt as "at home" as I did here. Art and Rita (the lodge owners) were hospitality personified, Rick and Beaver (their assistants) were excellent, knowledgeable companions and were quite fun to talk with.

The lodge itself is like something out of Hollywood. It's the oldest continuously operating lodge on the lake, started by some soldiers mustered out of the army following WWII. It's a funky blend of the old and the new, the elegant next to the rustic. It's the only place where I've seen knotty pine paneling and Queen Anne chairs with red velvet cushions and it seemed to fit somehow. If you get up here, you've got to go with Rita's cooking, we did and I think we gained 10 pounds in 4 days! Our first night up there we were treated to freshly caught walleyes (in Art's special batter) and moose stew. Rita (who should be referred to as "Goddess of the Island and Fixer of Fine Feasts", except it's too long) has no idea how close she came to having an overstuffed angler explode in her dining room! Art's knowledge of the lake is phenomenal, he's a virtual encyclopedia of lake lore. While we were up there, we were put onto patterns immediately that might have taken days to figure out on our own. Art and Rita have some rooms in the main lodge (where we stayed) and they also have cabins to rent. There are boats and outboards to rent if you don't want to trailer your rig up there. We spent several memorable evenings in the HUGE, screened gazebo, a great place to relax and have a cocktail or two.

The lake itself is very interesting, it's a very typical Canadian Shield lake, with the usual compliment of lake trout, walleye and northern pike. It's not out of the ordinary to be in 120 feet of water one minute and then be in less than 3 feet within 20 yards. Talk about a structure angler's dream! There was one place where my bow locator was reading 3 feet of water and the locator on the console was showing 55 feet. "Ya wanna see a drop-off?"

What wasn't usual though was the fishing. I've been to Canada before and never had fishing like this. We were catching lake trout in water depths from 18 feet to 18 INCHES!! We consistently caught lake trout day in and day out, 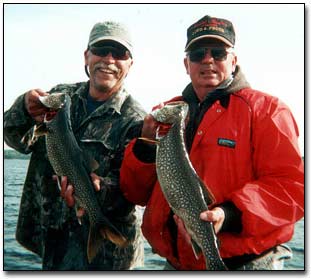 at all times of the day, literally dozens each day, not little dink lakers either. It was a total blast, throwing bass spinnerbaits and crankbaits into shoreline rocks and pulling 5 - 8 pound lakers out. While I'm not a die-hard laker angler, I learned that I could soon become one, "bass fishing" for 6 pound average fish.

Art told us that the lakers were in spawning this time of year, to look for places that had large boulders near deep water, which was virtually on each and every island and that we'd be into fish. Guess what? We caught these beautiful battlers on almost every island that we went to and in Art's section of the lake, that's saying a lot. Anyone that knows me knows that even though I'm a fishing guide, I'm not too terribly prone to exaggeration. Well, I'm not exaggerating when I tell you that my arms got kind of worn out landing 25 - 28 inch lake trout on light walleye tackle. Sucked to be me, huh?

My guide partner Gil came with me and he couldn't believe what we were catching. The sound of Gil giggling and his drag singing soon became like MUZAK, a constant sound in the background. But up here, in September, that was the only sound, other than the wind in the pines, the lapping of waves and the occasional cry of a loon. Getting him to stop catching lake trout and go home wasn't easy either.

For those of you saying, yeah, but I don't have a boat set up for lake trout trolling, let me tell you... "Me neither." I went up there with my 19' ProCraft bass boat and all we did was cast for these spotted sluggers. We threw some spoons but for the most part, what we caught the lake trout on was Rapala Suspending HuskyJerks and Rapala ShadRaps. The presentation was so difficult, throw out the lure, sweep the rod about 3 feet and pause the rod. Usually, when you went to sweep the rod again, there was a laker with the lure in its mouth. What I didn't realize is that lake trout follow lures as readily as muskies do. I couldn't begin to tell you how many times I'd look down in the

gin clear water and see a laker stalking the lure. Where they did differ was that they wouldn't hit a figure 8. Gil at one time had 3 lakers chasing his lure at the same time. He also had one follow that he said looked as big as a 30 pound muskie! He wanted that one.

While we were up there, there was a group of guys from the Madison area at the lodge too. One of the gents caught a (if memory serves me correctly) 44 inch northern pike that is still cruising the lake, waiting to terrorize some other unsuspecting angler. When we tired of hauling lakers in (which wasn't often) we did prowl the weedy areas, casting spinnerbaits and bucktails for pike. We caught some darned nice fish and had a couple follow lures in that had I landed one of those, would have had my wife upset with me because of the taxidermy bill.

We also got into some nice walleyes one evening with Art and Rita, sitting in my ProCraft out in front of the gazebo. We were only out for an hour or so and caught enough walleyes for a fantastic meal. If you've never had cold water walleyes, fresh from the water to the frying pan, you've led a terribly sheltered life and really need to get out more.

I don't know if I can describe fully the sights and sounds of this adventure. But you really need to experience for yourself the sight of a Canadian sunset, the Northern Lights shimmering over a glass smooth lake, the waves lapping against the hull and the sound of a silence that seems to fill you up. The beauty of the changing aspen leaves, intermingled with the spruce and balsam, reflected against a clear, blue shoreline took my breath away and actually made me stop fishing from time to time, just to drink it all in. To get me to stop fishing is really saying something.

Art's lodge is located on an island, waaay far away from it all. It's the closest thing to a fly-in without getting into an airplane. But, there's hot and cold running water, flush toilets, shower facilities, and electricity for the necessities (charging trolling motor batteries). Mousseau's has all the conveniences of home with a good shot of Canadian wilderness thrown in to recharge those "civilization weary" souls.

If you can only take one trip a year, make sure to check out Art and Rita's place. If you love to fish, see beautiful scenery, meet great people, eat vast quantities of good food and generally enjoy yourself, you really need to reserve a spot on Art's calendar. If you don't, you're only cheating yourself.