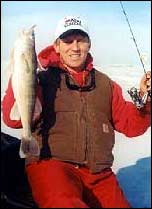 Walleyes can be pretty easy to catch, much of the time, as soon as there is safe ice. In many bodies of water, the fish haven't seen much fishing pressure since Labor Day, so they're willing to bite.

The numbers of baitfish are low now because many of them have been eaten throughout the summer and fall, and the remaining ones are, in most cases, too big for the walleyes to feed on. This also makes the walleyes more willing to bite your bait.

And, just because it's cold on top of the ice doesn't mean the walleyes aren't hungry. They are. Put a bait in front of them and they'll probably eat it. Here's where and how you can catch walleyes as soon as there is ice on the surface. Remember though, don't go out until you are sure the ice is safe.

I have caught walleyes on deep humps in thirty feet of water under early ice, and I have caught them on rock points in less than ten feet of water early in the ice-fishing season. If you were catching walleyes on deep humps late in the open water season, in many cases they will still be there when the lake freezes over. Many anglers start their search for winter walleyes in the same areas where they ended their fall fishing.

Oftentimes the best bite will be later in the afternoon. Nonetheless, it pays to be on your spot at least an hour before you expect the bite to start. You want to get several holes drilled at different depths and at different locations on the structure. By drilling the holes early, the area will have quieted down by the time the bite starts.

Some anglers like to use a hand auger this time of the year as they feel it is quieter, while others prefer a StrikeMaster Lazer Mag. This auger is really fast, so the noise takes place over a short period of time.

You should have baits tied on and ready to go before the bite starts. If you have one rod, start with a Buck-Shot Rattle Spoon. Over the past several years, this spoon has accounted for many, many walleyes.

If you have another rod, rig it with a slip-bobber and a single hook spoon, or maybe just a plain hook. Adjust the slip-bobber so the bait is about a foot off the bottom. If the water is stained, set the bait closer to the bottom. Walleyes will usually move farther in clear water for a bait. Set this rig in a hole about three feet away from the hole you're jigging in. The spoon will take the active fish; the slip-bobber rig will take those that are a little less aggressive.

If you see fish on the sonar and they won't bite, try different jigging motions and different colored spoons.

If you're not seeing fish, move to a different hole. Some anglers like to sit on a bucket, but many prefer a shelter. You're going to fish better if you're warm. The Solo Ranger that has become so popular enables you take all your gear to the next hole in one move, and provides a warm, comfortable fishing platform.