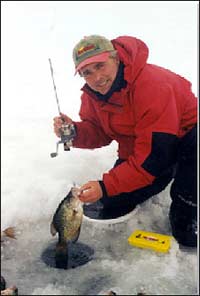 We are assuming that all the blades are sharp on the auger, there is new line on the reels, and our tackle inventory has been updated. We need all these issues to be in place before we step on the ice.

We also need to be sure that the ice conditions are safe for fishing. If someone is driving a truck on the ice, you have missed the early season of ice-fishing. Early season is when the ice is safe for walking, but is certainly not safe for trucks. Be sure the ice is safe before you venture out.

Remember that fish can be very skittish under early ice. We will be drilling holes directly over their heads, so noise is a consideration.

Also, if there is no snow on the ice, the fish will be able to detect any movement we make.

At some times of the year, it works well to pop several holes, then move quickly from hole to hole until action is found. Essentially, you are going looking for the fish. Early in the ice-fishing season, however, many of the most successful anglers prefer to let the fish come to them. They still pop several holes, but they sit at each individual hole much longer to give the panfish a chance to move into the area and find the angler's bait.

Other anglers prefer to start in an area that they know is home to panfish and drill just a hole or two. They feel that this super quiet approach, over the long run, produces more fish.

Regardless of which approach you choose, equipment is very important. You need an auger that will pop a hole in the ice quickly and quietly. I like a StrikeMaster Lazer Mag for all my ice-fishing. Even though the engine makes some noise that a hand auger doesn't, the Lazer Mag gets through the ice quickly. Additionally, the power auger can be used later in the year when the ice is thicker.

Although the air temperatures may still be warm enough where a shelter isn't needed for warmth, the shelter will hide an angler's motions. Many anglers believe that this factor alone is a good reason to fish out of a shelter early in the year, but the shelter also makes it much easier to transport gear to and from the vehicle. The Frabill Solo Ranger does a great job for fishing and carrying gear.

Of course we still need to put a lure down there to tempt the fish, but if we keep our noise and movements to a minimum, we are going to be ahead of the game. Remember, be careful, quiet, and don't move too much and you're on your way to a successful ice-fishing outing.