Erie not just a "Great Lake" but great fishing! 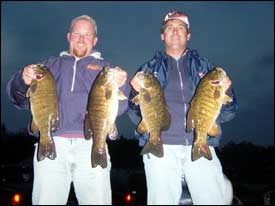 If you open any magazine dedicated to fishing you are sure to find an article about the great walleye fishing that Lake Erie has to offer! This lake is one of the greatest ecological success stories of all time! Quoting the Department of Biological, Geological and Environmental Sciences, "By the late 1960's Lake Erie had been declared ecologically dead!" It is amazing that this lake could be turned around after many decades of abuse.

The water fires on and around Lake Erie are legendary! The water was so polluted that it would actually catch fire! Even though the fire of 1969 made big news, there was several fires form the mid 1940.s until the late 1960.s. Now Lake Erie is one of the premiere Walleye fishing destinations in the country! There are huge schools of big fish calling this "Great Lake" home.

I have not fished Lake Erie since the mid 1980's, (pre zebra mussels) back then the water was still what would be considered off color. I can remember casting inline spinners tipped with night crawler pieces and catching some nice fish, even on a day when the guide thought things were slow! These days the invasion of the zebra mussels have cleared up Lake Erie.s water to the point that long line trolling and the use of planer boards are needed at times to entice strikes in the now clear water.

I'm sure it may seem like this article is about Walleyes and Walleye fishing but it is not! After all I am and have always been a Bass fisherman at heart. I feel that many Bass anglers have overlooked Lake Erie's Small-mouth Bass!

I was asked this past August to travel to Detroit and help out with the Wonderland Open Bass tournament. Being the "Fishing Freak" that I am I was glad to help out! My job was to pilot the Mid American Tournament Authority.s (Formerly Big Bucks Bass) .Lunker Limo II. (live release boat) and to release the bass that the tournament competitors brought to the scale. Before the tournament at the launch site at Lake Erie Metro Park I did as I usually do before a tournament, I kept my eyes and ears open and my mouth shut, I was hoping to learn a thing or two! What I learned was most of the teams were sure it would take a limit of nearly 20 pounds to take first place! I was in awe! A five fish limit of 20 pounds to win?

As I rode out on the pontoon boat in the early morning light with Dave Mitter the tournament director and proprietor of Wonderland Marine West to watch the 150 + teams blast off I could see the bottom of the lake in 10 feet of water in low light conditions. Things sure had changed for the better since I was last on this lake! Dave told me that most of the anglers that fish this or any of the other tournaments that he holds during the year on Erie tell him that they usually catch their limit in two hours or less and that it is unusual for them not to cull fish during a tournament day.

One team broke down a few miles from the tournament site and they had to get back to the launch with their trolling motor, while Dave and his crew and sponsors helped change their spark plugs and hook up some fresh trolling motor batteries so that they could go out and continue fishing they told me that they caught four keeper bass while fishing blind casting tubes as they went along trying to get back to the launch site. After the repair they were off to finish off their limit.

At the weigh-in the first team to weigh got in line and there was a few minutes until the scale was open so I took the opportunity to speak with these guys, they had a five fish limit of almost 19 pounds but they seemed a bit discouraged, they did not feel that they had enough weight to win. I really could not understand until teams starting weighing in and I started loading the Bass into the aerated tanks on the Lunker Limo.

I have never seen so many Big Small-mouth Bass and I mean BIG, the Big bass of the tournament was a 5.36 Small-mouth! It took 19.83 pounds to win and 15.64 to cash a check for 20th place! I know of several teams that had five fish limits but the anglers were sure they did not have enough weight to earn a check and they did not want to stress the fish more than they already had to so they released them out in the main lake instead of bringing them to the scale. This day I handled and released over 330 Bass although there were a few Largemouth bass weighed in most of the fish were big Small-Mouth, I am sure that by releasing these fish into the deep-water current area near the mouth of the Detroit River I helped them survive!

There was a B.A.S.S Open tournament held on Lake Erie this past September, it took a three-day total of 53 pounds 2 ounces to win in that tournament! During this even a record was set for the most limits of bass being weighed in during a B.A.S.S. event. Canadian Mike Desforges winner of this event stated that he had over 30 spots to hit where he could catch a limit of Bass but he needed to key in on the areas where he had found bigger fish, this limited Mike to his three best spots. Although he lives only an hour away he did not want to create confusion for himself so he intentionally stayed away except for the three official days of practice.

A good friend and fellow B.A.S.S federation club member Carl Roedel has fished a few tournaments on Lake Erie including the B.A.S.S. open this past September, Carl told me that while practicing for a F.L.W. tournament a few years ago he hooked and landed a Small mouth over 7 pounds. I love to go out on Geneva Lake and catch the 3- 4-pound Small Mouth bass there; I can.t imagine what a 7 pounder must fight like! Carl just wishes that this Bass had come during the tournament!

For the past few years my wife and kids have been after me to take them to Sandusky Ohio and visit the big amusement park there called Cedar Point, You can bet that next year is the year we go! I am not a huge fan of roller coasters but I do like the water ride that sits on my driveway! I hope I can set it up so this trip will be at the same time as the 2004 Wonderland open because I want to compete in this well run tournament!

If you are looking for a place to go and catch some big small mouth bass, or looking to compete in a well-run tournament with some great prize money and other prizes to be had then Lake Erie and the Wonderland Open would be a great place to do it!