By Robert Piorkowski - November 1, 2000
So you are heading out for a day of fishing, or for a few hours. You are mentally ready and have all your tackle prepared. Here is the question that I'm asking. Would you rather catch a great fish on your first or last cast of the day? Speaking from experience, I've had lots of these days on the water, including zero fish days. From my observations, it's interesting to see the different reactions to this question.

Last fall I planned to spend an afternoon fishing on the Fox River near Geneva,Ill. I bought some bait at a local tackle store, put on my waders, locked up the car and walked to the river. While standing on shore, I picked out the first eddy I would fish, and determined where I should stand for placement of my casts. I waded adjacent to the eddy, baited up and dropped 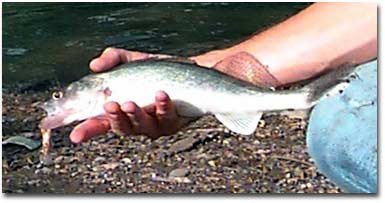 my first cast directly into the calmer water behind a hidden boulder. My bait drifted about 1 foot, and then it stopped. With a quick hook-set, I was fighting a good fish. My goal was to wade to calmer water where I could easily handle the fish. After a short fight, I landed a 15-inch walleye. I released the fish, and quickly baited up for another cast. I was excited to say the least. On my first cast, I hooked a fish, and I couldn't wait for what the next cast would bring. I waded all over the rest of the day, and only proceeded to drown bait. I was disappointed, and forgot about the first walleye. I tried many colors and styles of baits since hooking the early fish. None produced, so I kept working the eddy's searching for fish. The early fish raised my expectations so that I was anticipating great action. On the drive home, I contemplated the days fishing. I realized that one walleye was better than zero regardless when he was hooked. I had also determined that I ran out of time before understanding the correct pattern. (I also determined that one week might not be enough time.) Looking back, It was nice to get out, and test some new equipment.

On another occasion, I was fishing the DesPlaines River, and again drowning bait. As my time to exit the river approached, I set a limit to the number of remaining casts. With each cast, I counted down, 3 left, 2 left, and finally the last cast. I had made numerous casts to an eddy behind a rock pile with no results. When I decided I was on my last cast, I threw right back to the same eddy. Towards the end of the drift, I felt a steady pull. Oh yea, good fish on the last cast! This fish was determined to fight using the current. I had a difficult time directing him to the shallows and slack water. After a short fight, I reached into the water and grabbed a 19-inch walleye. I took a quick photo, then promptly released the guy to fight again. What a great way to end a days fishing. This time I had quickly forgot the hours spent snagging the bottom and loosing bait, prior to catching the walleye. On my drive home, I reviewed the techniques that worked and didn't produce. I spent a lot of time wading, and casting different angles to eddy's, logs, and rock piles. I reviewed color choices and drift patterns. I definitely learned something, and that was patience. I was fishing with the right baits, but I needed to be more aware of my presentation style. From the events of that day, I concluded the next time I'll make better use of angles for drifting the bait into a specific location.

Comparing the drive home, and notes from these two days of fishing is interesting. In the earlier instance, I was happy to have the time to be fishing, but slightly disappointed at only catching one fish. On the later day, I viewed it as a complete success. The fish-less time spent on the water led to the catch at the end of the day. There are times when I don't get out fishing for a few weeks, and I'm bull anxious to make a few casts. It's a great feeling of making that first cast and pulling in a fish. You almost feel, "Yes, I know what I'm doing". I admit feeling the rush of adrenaline when catching fish on the first cast, but that quickly dissipates, as hours pass with no results.

Regardless of the day's outcome, I'll be back fishing. When I leave the water with out any action, I try to learn something from the trip, and understand the reasons. When I do have a productive day, I prefer to believe that I actually did learn something from previous trips. For any conditions, I would prefer catching lots of fish to catching zero. But for this debate, I prefer the last cast be the producer. Ending a fishing day on a positive note will keep me thinking about when I can return and reproduce the hot action.