By Steve Huber - September 1, 2000
Anyone that knows me might say that I'm obsessed with fishing. I'd argue that point but my wife would be standing behind me, nodding her head yes to all the points proving that obsession. Those same people also know that muskies will get me fired up beyond belief. So then, why do I love fishing Chequomegon Bay so much??

It's simple... those darned smallmouth bass!! For those of you who haven't made the "Pilgrimage 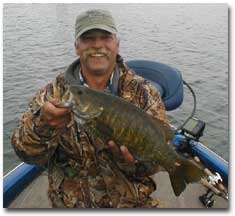 to Mecca", if you love smallmouth bass, and lots of them, YOU'VE GOT TO GO! NOW!! If your idea of heaven is doing battle with these rod bending, line snapping, never surrender, bad attitude bruisers of the bass world, then you must make the effort (?) to "Go North Young Man."

Chequomegon in located in the northern part of Wisconsin. It's a 30,000 acre bay of Lake Superior at Ashland, Wisconsin and I'm telling you, the place is loaded with smallies. My wife Janet thinks that I'm goofy (maybe I am) and wonders why I drive for 2 hours, past "God Only Knows" how many lakes that have smallmouth, just to fish this particular area. But, there is method to my madness. You see, The Bay is being managed for a trophy fishery and the daily bag limit is one with a minimum size limit of 22 inches. That's right, I didn't hit the wrong keys, I meant 22 inches!! So do you know what that means? The average size of a Chequomegon Bay smallmouth is a puny 18 inches. Where else in the world can you drive to, launch your boat and within minutes, be hauling in smallies that "average" 18 inches? Not too many places would be my guess.

You're probably saying to yourself, this guy's been eating PowerBait again. Wrongo my friend, I might be drinking a little too much coffee but believe me, try fishing this area before discounting me as a another north woods lunatic.

One of the things that I like about The Bay is that fishing up there doesn't require specialized equipment like muskie fishing does. A 16' boat, some light or medium spinning tackle, common sense and you're good to go, although a good locator helps. I add the common sense part because Chequomegon Bay is a BIG body of water and is susceptible to some severe weather changes. You do have to keep an eye on the weather and watch the waves but you really should be doing that when you're out anyway...Right? I mean, there's no fish that's worth risking it all over, so when you do fish this water, be smart and at the first sign of the waves picking up, beat feet off the lake...OK?

Locating the smallies is fairly simple. Get a good lake map and look for rock piles (smallies and rocks go together like ham and eggs), especially at this time of year. Go out, watch your locator

and when you start seeing rocks, drop a marker and start fishing.

Methods used to catch these beauties are quite varied. I've done well throwing spinnerbaits over the rocks. Long, minnow imitating crankbaits like Rapalas or Thundersticks do well, either cast or trolled. Same goes with the crayfish imitations like the Rebel Crawfish. Soft plastics work well, things like tube jigs, plastic worms, plastic crawfish and lizards get em. Live bait, crawlers, leeches and minnows on Lindy Rigs work when nothing else will. But please be careful when using live bait.

The smallies in this lake are extremely aggressive and will inhale live bait so if they're hooked deeply, cut the line and let them go. They'll do a lot better if you don't try to rip the hook free. I've been experimenting with circle hooks the last couple trips and I've had a lot less "gut hooked" fish using a #6 circle hook. Most of the fish that we caught on these were hooked right in the corner of the mouth, just where you want it to be.

If you've read that when fishing for smallmouth bass, you have to downsize your lures, don't believe it for these monsters. I've been catching them using « and 3/4 oz. Spinnerbaits! Yep, muskies one day, smallmouth the next, on the same lure. I told you these fish were big and aggressive. When selecting minnows, get them locally, tell them that you want to catch smallmouth and you want chubs. When you get them, don't think that they sold you pike suckers cuz believe me, the smallies will take this bait. It's very common to have them slam a 4-5 inch chub. See, I told you not to downsize your lures.

The last couple trips have been under some weird weather conditions and the fish just weren't having much to do with artificials. So even though I pleaded with all the fishing gods I know, promised the smallies that I'd release them right away, they just wouldn't come out and play. That's when the live bait came into play. Normally, we could get even the fussiest smallies to bite by using a leadhead jig and some livebait. Crawlers didn't work, neither did the leeches, OK, minnows it was. Put on a minnow, still nothing, even though I could see fish on the locator.

I threw out an anchor and put on my thinking cap (all right, it was a baseball cap....picky picky, picky). "Maybe we're moving the bait too much" I thought. I developed a "highly technical" method for fishing these frontal system smallies. I grabbed a rod with a Lindy Rig, lip hooked a minnow and opened the bail. I set the rod down in a rod holder and when the sinker hit the bottom, closed the bail. It was a matter of less than 2 minutes when the rod tip dipped to the water. Lifting the rod, I was fast into a smallie. This "system" has worked well for the last 2 trips and believe me, it was a welcome relief for a couple reasons.

First of all, it was neat just to sit and fish. No worries about boat control, running the trolling motor, positioning the boat, all that "guide stuff" that I normally do. Locate the fish, drop an anchor, drop the lines, relax. Sit and sip a cup of coffee, put down the cup, grab a rod, catch a fish, ho-hum, another 3 - 4 pound smallie, what a bummer! Most of all, it worked like a charm. Any system that produces fish on a consistent basis is a winner in my book, especially if it's easy.

Recently, I took my son to Ashland for a little "Bonding Time". The weather conditions were far 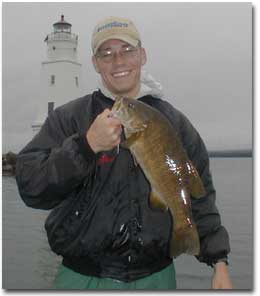 from perfect with front after front coming through and the bite was off a little. In three and a half days of fishing, we caught 56 smallies averaging 18 3/4 inches. I don't think you could have knocked the smile off either one of us with a baseball bat.

I also had another friend up there for the day. He had recently been to Canada fishing and was somewhat skeptical of my claims. Ask Dan now what he thinks of the fishery in The Bay. He was giggling like a school-kid, hauling in bass after bass, absolutely astonished at how hard they fought and how thick and heavy these bass were. He told me that he's never in his life caught bigger smallmouth bass and especially in such quantity. We actually lost count of the number of smallmouth that we caught before lightning chased us off the lake. There was still a good 3 hours left of daylight, we were still catching them when we left or I'm sure the numbers would have been even higher.

So, if you're stuck on where to go for some quality bassin', you really need to check out Chequomegon Bay. Besides, you might just tangle with a HUGE toothy pike or nab a good walleye. All three species are a possibility when fishing The Bay. You don't have to go to some remote fly-in lake to have a rod-bending, arm tiring day, just "Go North Young Man."

Until next time, see Ya!