Applying the K.I.S.S. Program to BASS 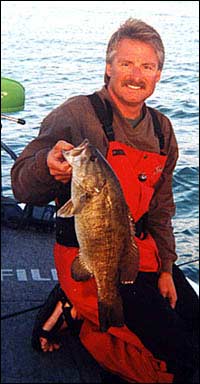 Its roots are in business. The acronym "K.I.S.S." stands for "keep it simple, stupid." It was intended as a rallying call for corporations to maintain simplicity in the face of futurism. Why? Because consumers demanded both modernism and ease of use.

The same premise likewise applies to fishing. Each season brings a host of new gadgets and doohickeys. Some are complex, others elementary. Some work - based on my experience - and others are merely eye-candy on the shelf. But ultimately, anglers demand products that are both cutting-edge and "user friendly."

The net result of acquiring every newfangled device is the creation of a "Gear Godzilla." The beast grows, too, with the passing of each season as new equipment piles on the old. Pretty soon there's more tackle than in the boat than foot room. You've reached maximum density.

There's an antidote, though, and one that doesn't involve golf clubs.

Many anglers - some in the professional ranks, too - are falling back to the basics. They're fishing with fewer lures, weeding through the infinite of bags of plastics and dozens upon dozens of crankbaits and narrowing down the field. They don't necessarily own less equipment, either, but rather store a cache of only topflight pieces.

Part of using these so-called "core baits" is comprehending, in detail, how and where to use them. And springtime bass fishing lends a prime example of this principle, my K.I.S.S. program.

Locating largemouths in the spring isn't rocket science; it is not, and don't let anyone tell you it is. On natural lakes, bass follow a reasonably standard regimen from the end of winter through breeding season. How that routine lays-out is largely dictated by temperature, too. Bass head to the warmest water; cut and dried. They seek heat for comfort, but also the smorgasbord of eats the shallows host. Then, as spring progresses, many of those same tepid zones double as spawning grounds.

The recipe for a good spot isn't mysterious, either. Shallow, dark-bottom and dirty water bays heat the quickest and consequently entertain the most activity. Heavily weeded bays tend to produce best, particularly those with newly budding greens and or emergent vegetation such as cattails and bulrushes. Timber is a bonus, too, as are feeder creeks and rivers. All of the above attract and cultivate aquatic life.

Summoning strikes is straightforward as well. In the spring, I rely on a handful of proven and basic baits and techniques. And my opening volley involves a slow-rolled classic.

Spinnerbaits are as down-to-earth and workmanlike as you can get; not to mention older than time and nifty to collect. And in the spring, few lures compare.

I prefer a smaller, lighter model, too, but one with a substantial blade. The oversized blade - a single - provides loft while the lure tools along at slow speeds. Big blades also transmit a tempting pulse, one that bass adore. The "Pro-Model" Reed-Runner Spinnerbaits by Northland Tackle are my first choice, and typically, a white/chartreuse body with a hammered nickel or gold blade takes the worst beating from bass.

Spinnerbaits can be pulled slowly, catering to drowsy coldwater fish, but are also excellent for blanketing vast areas, searching for biters.

In the spring, most fish are taken within 5 or 6 feet of the shore or related shallow structure, so I put the MinnKota Maaxum in drive, trace my targets closely, and make short - 40 feet or less - and accurate casts, usually in a sidearm fashion, too.

As an aside, I run the trolling motor prop only 12 to 18 inches down. By keeping it high, more timber and sundry obstructions are dodged. Additionally, the bottom doesn't get churned as much. A veil of debris is a turnoff to fish.

I retrieve slowly, too, just tugging the bait fast enough to keep the blade gyrating. You don't want it breaking the surface, either, or dredging the bottom for that matter. Tracking 6 inches to a foot beneath the surface is ideal.

Pockets of fish can be quite tight-knit, too. A sunken log or small patch of greens can hold a wad of fish, so I carpet bomb good-looking areas, and continue the assault even if nothing's taking, because eventually, curiosity will get the better of a bass or two.

Oftentimes, bass won't make contact with the lure during a failed attack, either, but rather "swirl on it." As the fish turns away, its tail generates enough turbulence to freeze the blade. You'll actually feel the spinnerbait go dead. When that happens, toss beyond the area of impact and draw the bait back through.

Spinnerbaits perform best when towed by a compatible line, too. A 12 to 14 pound abrasion resistant line, such as Rapala Tough, is a perfect match. Consider upgrading to 17 pound test in extra hazardous conditions. 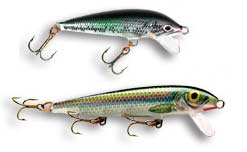 My next presentation is also rich with history, and likewise elementary to fish. Rapala's Original Floater. The name alone stirs memories. But like the spinnerbait, my Original Floaters see as much combat today as they did 10 and 20 years ago.

In the spring, I'm partial to the #13 (5 ¼ inches) size in traditional silver with black. It looks and behaves like a real minnow, and day in and day out, it's the most reliable stickbait you'll ever fasten-up.

I don't fish the Rapala fast, either. Give it throw, let it settle for a couple of seconds and begin reeling. Mix in a few pauses and twitches, but nothing too jerky or swift. The lure will maneuver just beneath the surface and rise ever-so-slowly when halted. The lure can be attached with a cross-lock snap, but I prefer tying directly with a Rapala Loop Knot for improved action and sensitivity.

The next level in hard-baits is the Rapala Jointed. It's sleek and tubular profile resembles the Original Floater, but around the midway point the body is divided and hinged. The splicing results in a wider wobble and added vibration.

The Jointed is best fished straight and slow with no snapping whatsoever. And for reasons unknown, sometimes bass prefer the Original Floater and other times the Jointed. Because of the ambiguity, I keep one of each rigged and ready, along with a spinnerbait on another pole.

Those are three clear-cut lures. Each is simple to operate and catches fish with consistency. But if there's a lull in the action or I simply can't get anything to chase, out come the plastics, usually soft jerkbaits and trick worms. However, they'll have to wait for another discussion, and until then, keep it simple... sportsman.